By: StockMarket.com
Should Investors Be Watching These Top Renewable Energy Stocks Right Now?

Throughout the Q3 earnings season, companies continue to impress across the board. Notably, renewable energy stocks are also among this group of stocks in the stock market today. For the most part, this comes as no surprise given the growing case for the industry today. Once you consider the ongoing climate crisis, the potential long-term growth prospects of clean energy stocks would be apparent. Not to mention, governments across the globe are hard at work pushing their respective environmental agendas. In turn, this would mean that there could be plenty of funding heading towards the industry as well.

Evidently, we could take a look at the likes of Enphase Energy (NASDAQ: ENPH). As a leading name among solar stocks in the stock market now, Enphase continues to wow investors. The company’s shares are surging by a whopping 22% as of 11:24 a.m. ET since today’s opening bell. Accordingly, this would be thanks to Enphase’s impressive quarterly earnings report posted after yesterday’s closing bell. In it, the firm reported a record quarterly revenue of $351.5 million, marking a massive 96% year-over-year surge. According to CEO Badri Kothandaraman, Enphase is seeing a boom in its business despite the current global supply chain pressures.

Elsewhere, green energy firms such as Bloom Energy (NYSE: BE) are making headlines as well. As of this week, the company is expanding its current partnership with SK eco plant, an affiliate of South Korean conglomerate, SK Group. Through this expansion, the duo are looking to bolster their market leadership in the hydrogen industry. Ideally, Bloom Energy could now be looking at revenue totaling $4.5 billion from this project. All in all, renewable energy companies remain as active as ever. Could all of this spark investors’ interest in these top renewable stocks now?

Plug Power is a renewable energy company that focuses on its modern hydrogen and fuel cell technology. In fact, it has revolutionized the material handling industry with its full-service GenKey solution, which combines all necessary elements to power, fuel, and serves its customers. With its products, the company will replace lead-acid batteries to power electric industrial vehicles. PLUG stock currently trades at $34.60 as of 11:53 a.m. ET and is up by over 130% in the past year alone.

Today, the company, together with Lhyfe, a pioneer producer of renewable and ecological hydrogen, announced a partnership to jointly pursue and develop green hydrogen plants throughout Europe. Impressively, this initiative seeks to generate a total hydrogen capacity of 300 MW by 2025 and to start the development of a 1 GW production site. Furthermore, this agreement builds upon the working relationship established between the two companies earlier this year. In that project, Plug Power’s hydrogen electrolyzer technology will provide 1 MW of capacity to the world’s first offshore hydrogen production facility. It is developed by Lhyfe and is powered by electricity from a floating wind turbine off the coast of Le Croisic, at SEM-REV, Centrale Nantes’ offshore test site, and will be operational by 2022.

“We’re thrilled to expand our work with Lhyfe, bringing the green hydrogen revolution throughout Europe,” said Andy Marsh, CEO for Plug Power. “The team at Lhyfe have bold ambitions and capabilities that align with our own vision for a decarbonized future, and ability to scale hydrogen infrastructure quickly. In North America, we’ve already built a robust ‘hydrogen highway,’ which includes 165 hydrogen fueling stations and stationary power for businesses and institutions, a success we plan to replicate in Europe.” All things considered, is PLUG stock worth adding to your portfolio today? 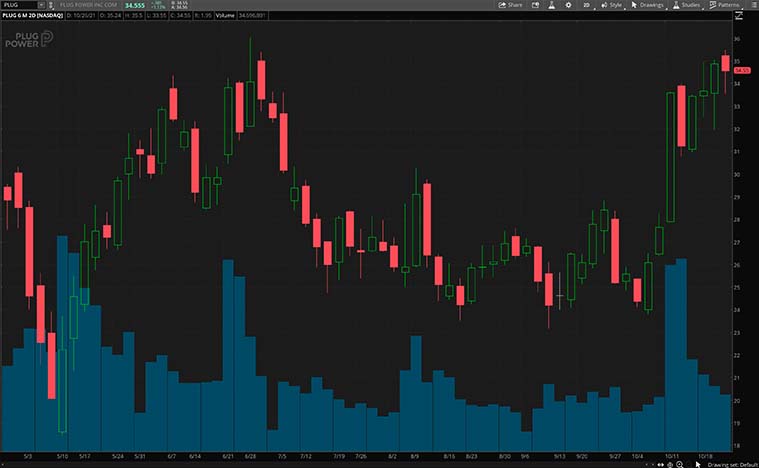 Following that, we have Brookfield Renewable Partners (BEP), one of the world’s largest publicly traded, pure-play renewable energy companies. Its portfolio consists of solar, wind, hydroelectric, and storage facilities across the world. On top of that, it is a global leader in decarbonization and its renewable capacity across multiple technologies and continents offers a diverse and high-quality cash flow. BEP stock currently trades at $38.29 as of 11:54 a.m. ET.

The company is set to announce its third-quarter financials on November 5, 2021. Last month, the company had its Investor Day. Diving in, the company says that it is a global clean energy supermajor, with a global scale and reach and also having the best-in-class growth capabilities. In North America alone, it generates over 20,000 MW of capacity and has a presence in Europe and Asia as well. Also, the company notes that it has a strong balance sheet, with $3.3 billion in available liquidity, and has deployed $7 billion of equity capital since 2012.

BEP also notes that tailwinds for renewables and energy transition are stronger than ever. This is driven by decarbonization targets by countries and governments all over the world and also the competitive cost structure to build this infrastructure. On top of that, the company also continues to see increasing clean energy demand, which would make BEP well-positioned to capitalize on this opportunity. With that being said, is BEP stock worth adding to your watchlist right now? 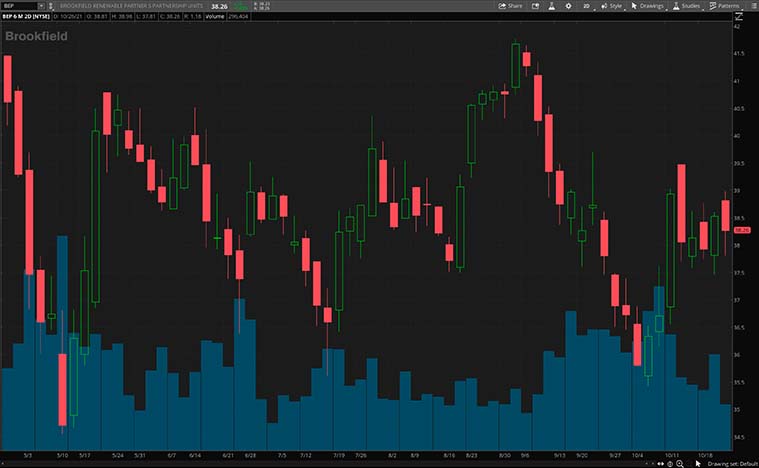 Another firm to know in the renewable energy industry today would be NextEra Energy. In essence, NextEra is a Florida-based electric services company. It is the largest vertically integrated rate-regulated electric utility in the U.S. in terms of retail electricity produced and sold. By NextEra’s estimates, it currently serves over 5.6 million customer accounts and over 11 million residents in Florida. Through its NextEra Energy Resources (NER) division, NextEra is also the world’s largest generator of renewable energy from the sun and wind.

Now, NEE stock currently trades at $85.34 as of 11:54 a.m. ET. With a market cap of over $167 billion, NextEra is evidently no newcomer to the business. Even so, the company does not seem to be resting on its laurels just yet. Just this week, NextEra made two notable announcements. Firstly, the company’s NextEra Energy Partners division is acquiring a 50% stake in NER’s renewable energy projects portfolio for about $849 million. Overall, NextEra appears to be reorganizing and optimizing its clean energy operations now. CEO Jim Robo cites the move as a means of supporting NextEra’s “continued ability to execute on its long-term growth plan”.

At the same time, the company’s NextEra Energy Transmission (NET) section also remains hard at work. Earlier today, NET was awarded the Wolf Creek-Blackberry transmission line project by the Southwest Power Pool. Through this project, NET aims to establish a new 94-mile, 345-kilovolt transmission line. The likes of which span substations from Kansas to Missouri. With NextEra seemingly firing on all cylinders, could NEE stock be worth keeping an eye on now? 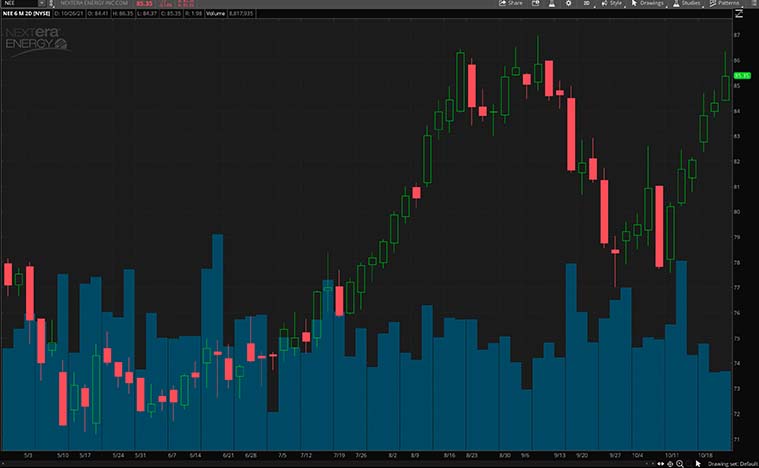