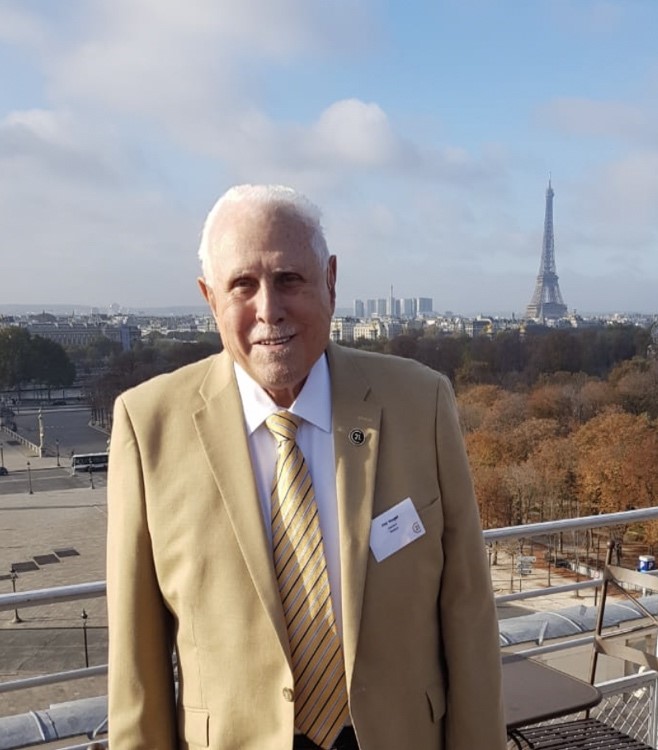 Philip J. Yeager, Real Estate Mogul and CEO of Century 21, Mexico was recently chosen to be featured in the Top 50 Fearless Leaders Publication by the International Association of Top Professionals (IAOTP).

While being selected to be published in IAOTP’s Top 50 Fearless Leaders Publication, is an honor in itself, only 50 of the world’s most brilliant, courageous, inspirational professionals are selected for this distinction.

These special honorees are hand selected to share their stories of perseverance, resilience, passion and strength. They have made outstanding contributions to society; they have impacted their industries and are respected in their trades. A chapter will be dedicated to each honoree and the book is anticipated to be released in the 4th quarter of 2021.

Mr. Yeager has exemplary brilliance in his field and has dedicated more than fifty years of his career as an accomplished executive and real estate franchisor. He was recognized as Top Global Real Estate Professional of the Year, and he will receive this recognition at IAOTP’s Annual Awards Gala being held at the Plaza Hotel in New York City this December.

At this time, Mr. Yeager represents the international real estate market through Century 21 Real Estate and his own company’s: Century 21 South America, Century 21 Mexico, Global MLS/ Omni MLS, and International Real Estate Franchise Company LLC., having serviced the Western United States, and currently: Latin America : Mexico, South America and with interests in nine countries in Europe. Mr. Yeager is a dynamic, inspirational leader, he has demonstrated success in every position and region he has ever served.

As a third-generation California Realtor, Mr. Yeager is the regional founder of two Century 21 Regions with 400 offices in the Western, U.S. beginning in 1972 through 1996. He co-founded Century 21 Mexico in 1989, which now has 220 offices and 4,500 real estate associates. He also dominates the market with Century 21 in South America having over 400 offices. Mr. Yeager is a participant owner in his newest venture Century 21 in Brazil. The population in Mexico is 129 Million. Brazil is 213 Million, and the population in Latin America is 662 Million.

Before Mr. Yeager became a Legend within CENTURY 21 Franchising, he attended Claremont McKenna College and earned his BA in business administration. Upon graduating, he joined the U.S. Air Force where he became a pilot during the Korean War. Mr. Yeager returned to college and completed numerous postgraduate courses in real estate, finance and law from Ohio State University. He holds a Lifetime Teaching Credential in the State of California for Real Estate Subjects, a California Real Estate Salesman License since 1956 and has had an active Broker’s License with the state since 1958.

In addition to his successful career, Mr. Yeager is a sought-after speaker who presents at conventions and conferences in the U.S. and Canada providing his expertise on real estate franchising and beyond. He is an active member of his community and supports the Eagle Scouts.  He belonged to the National Association of Realtors and also the California Association of Realtors (CAR), wherein he created real estate educational programs for this organization. Moreover, Mr. Yeager is the author of “Home Trade-Ins”. His committee at CAR created the “Graduate Realtor’s Institute” Designation and he holds the GRI # 21 Membership Number. The GRI today is considered the Number One real estate designation in the U.S.

Some of his most impressive accomplishments include launching the first MLS service in Mexico, implementing, and opening the Real Estate Trainers of Mexico and the existing Real Estate School of Mexico, he also founded as Franchisor, Global Real Estate Trainers LLC. Mr. Yeager has great pride in the mentorship and teaching opportunities he has had the honor of providing to the younger generation of realtors.

Throughout his career, Mr. Yeager has received awards, accolades and has been recognized worldwide for his outstanding leadership and commitment to his international real estate ventures. This year he was featured on the famous Reuters Building in Times Square, NYC, he graced the front cover of TIP (Top Industry Professionals) Magazine and he is being considered for the Real Estate Franchisor of the Decade Award given by the International Association of Top Professionals (IAOTP). In past years, Mr. Yeager has received recognitions as Realtor of the Year and has been celebrated for his success and leadership with many Who’s Who organizations for decades.

Looking back, Mr. Yeager attributes his success to his perseverance, his leadership skills and his passion for helping people succeed in real estate. When not working, he enjoys spending time with his family and friends, traveling and networking. For the future, Mr. Yeager will continue helping people become successful through his shared knowledge.

Currently, Mr. Yeager is busy implementing “Global MLS”, as  a Franchisor, starting in Latin America with the potential of 21 Countries and with over 40 Territories. His first operation opens in Mexico City in February 2022. He is also busy preparing to expand his C-21 Brazil region. People. He believes “Everyone has the ability to achieve greatness if they are willing to work hard for it.”

The International Association of Top Professionals (IAOTP) is an international boutique networking organization that handpicks the world’s finest, most prestigious top professionals from different industries.  These top professionals are given an opportunity to collaborate, share their ideas, be keynote speakers, and to help influence others in their fields. This organization is not a membership that anyone can join.  You have to be asked by the President or be nominated by a distinguished honorary member after a brief interview.

IAOTP’s experts have given thousands of top prestigious professionals around the world, the recognition and credibility that they deserve and have helped in building their branding empires.  IAOTP prides itself to be a one of a kind boutique networking organization that hand picks only the best of the best and creates a networking platform that connects and brings these top professionals to one place.