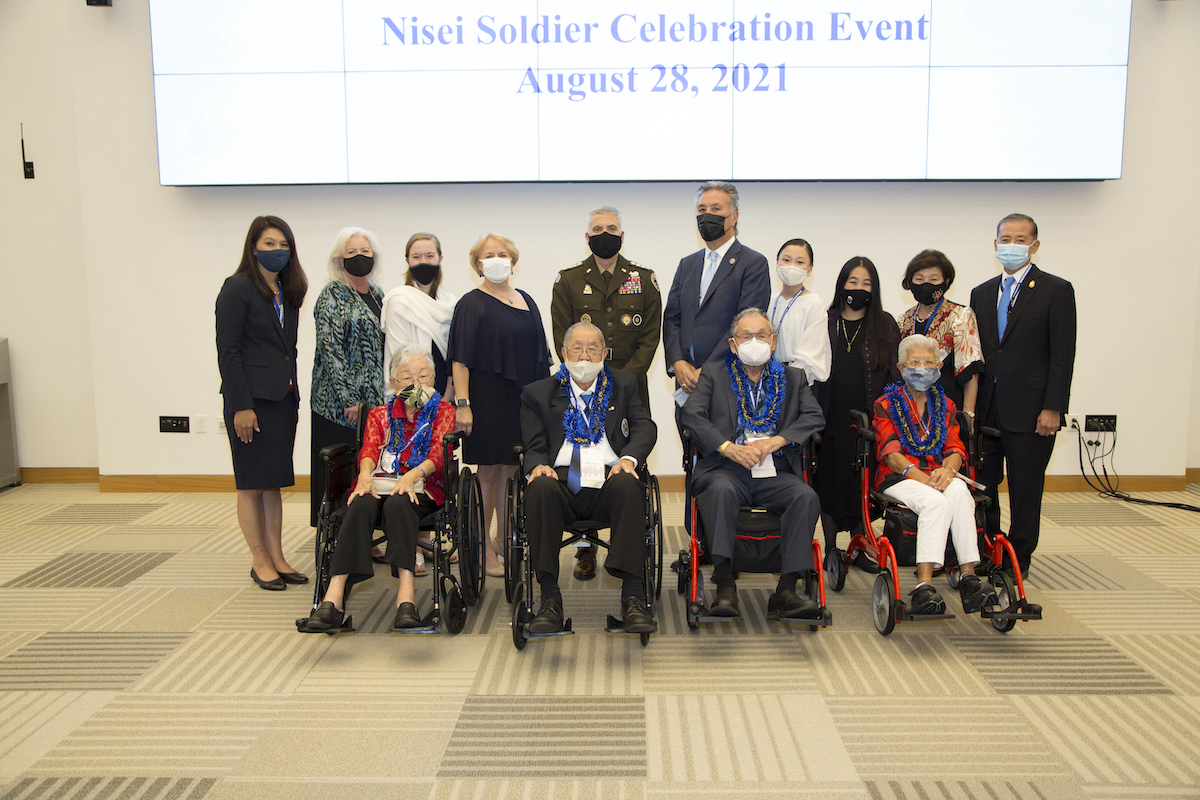 Invited by the National Veterans Network to view the recently unveiled Nisei Soldier Experience exhibit at the National Museum of the U.S. Army at Fort Belvoir, VA, Japanese American WWII Nisei veterans Colonel (ret) Charles Moriyama, 96, of Honolulu, and Ralph Matsumoto, 100, of Paramount, Calif., traveled across the United States to visit the Museum and the historic exhibit. Although they had never met, they shared service to the United States as linguists in the U.S. Army’s Military Intelligence Service during WWII.

The Nisei Soldier Experience exhibit is the National Museum of the U.S. Army’s first special exhibit that showcases an unprecedented collection of Japanese American artifacts that capture the rarely told story of the Japanese American Nisei Soldier during World War II. The exhibit highlights their struggles both at home and abroad, their courageous acts on the battlefield and their long-awaited recognition culminating in the Congressional Gold Medal awarded in 2011.

The importance of their service and the significance of the WWII veteran’s visit the Museum was highlighted by multiple visits with high-level United States government officials.

General Erik K. Shinseki (Retired) introduced General Paul M. Nakasone, Commander, U.S. Cyber Command, Director, National Security Agency/Chief, Central Security Services, for keynote remarks. Gen. Nakasone discussed his father’s service in WWII veteran who also joined the Military Intelligence Service. Col. Edwin “Bud” Nakasone was born on April 29, 1927 near Wahiawa, Oahu, one of 10 children born to Issei parents.  He was 14 years old when Pearl Harbor was attacked and recalls seeing Japanese planes flying overhead on their way to Wheeler Field, a U.S. Army airfield. Drafted in 1945, Nakasone went on to serve in Military Intelligence Service. Nakasone was assigned as part of the U.S. Army military forces in the occupation of Japan and the 168th Language Detachment, 1st Cavalry Division where he assigned people to translation projects in the War Crimes Trials and HQ’s daily translations. Discharged in 1948, Nakasone went on to teach history at White Bear Lake High School, MN, and Century College, White Bear Lake, MN until his retirement in 2000. Nakasone remained active in the Army Reserves and retired as a Colonel in April 1987 after nearly 42 years of service.

“The contributions of the Nisei Soldiers during WWII amplified the value and strength that inclusion and diversity, coupled with a strong sense of service can bring to our Nation,” Gen. Nakasone said. “They paved the way for future generations of Japanese Americans, myself included.”

Erika Moritsugu, deputy assistant to 47th President of the United States, President Joseph Biden, shared her personal connection having two uncles who served during WWII and received Medals of Honor.

“The new exhibit at the National Museum of the U.S. Army and the longstanding work of the National Veterans Network underscore how critical it is to honor and remember the Nisei Soldiers during World War II for their distinguished service fighting for our country,” said Erika Moritsugu, deputy assistant to 47th President of the United States, President Joseph Biden.  “We will never forget their allegiance and their gallantry. It is part of our legacy and inspiration and a critical part of our American history.”

Just the day prior, the Army Chief of Staff, General James C. McConville joined a social reception at the National Museum of the U.S. Army to meet with the two WWII Veterans and Medal of Honor families.

Gen. James McConville, 40th Chief of Staff of the Army visited with the veterans and families and told them, “Our Soldiers today stand on your shoulders and strive every day to live up to the legacy you left us.”

Col. (RET) Charles Morimoto shared “My wife Helen and I made the decision in 2019 that we would visit the Museum when it opened. Nothing could have stopped us from coming for this historic event. I wish more of my fellow Nisei Veterans were still here to see this exhibit that honors the sacrifice, service and honor of our units during WWII. I thank everyone who worked so hard for this exhibit, especially the National Veterans Network.”

“I never thought a day or exhibit like this would happen in my lifetime. I am so grateful to everyone who made this exhibit a reality,” said Ralph Matsumoto, WWII veteran. “I am grateful to the National Veterans Network for their commitment to telling our story.”

Over 26 wartime objects of the 100th Infantry Battalion, 442nd Regimental Combat Team and Military Intelligence Service (MIS) are on display, along with nine life stories and interactive maps that allows visitors to learn about the campaigns and battles fought by the 100th Infantry Battalion and 442nd RCT in the European Campaign and MIS in Pacific Campaign. From 2017 to 2020, the National Veterans Network worked together with the National Museum of the United States Army to gather artifacts and develop the historical content for the Nisei Soldier Experience exhibit.

“For the Japanese American WWII veterans and the families of the 100th, 442nd and MIS, this is an important and significant recognition by the United States Army.  Despite being discriminated based on their race, these young men and women rose above fear and prejudice in WWII to demonstrate their loyalty to the United States. It is our hope that many will come to learn to the Museum to learn this American story,” said Christine Sato-Yamazaki, executive director, National Veterans Network.

NVN’s mission is to educate current and future generations about the extraordinary legacy of American WWII soldiers of Japanese ancestry in order to promote equality and justice. The organization launched the campaign to award the Congressional Gold Medal to the first Asian American recipients in the 100th, 442nd and MIS units, and worked with the U.S. Mint to design the medal. In 2012, the organization partnered with the National Museum of American History and the Smithsonian Institution Traveling Exhibition Service for a seven-city tour to promote recognition of the Japanese American experience. In 2016, along with the Smithsonian Asian Pacific American Center and Smithsonian’s National Museum of American History, NVN launched an online Digital Exhibition to share the story of Japanese American soldiers of WWII (cgm.smithsonianapa.org). Beginning in 2017, NVN worked with the National Museum of the U.S. Army to gather artifacts from Japanese American WWII soldiers and their families that resulted in a special exhibit dedicated to Japanese American WWII soldiers when the Museum’s opening in 2020 along with artifacts and information located throughout the museum. In 2020, the NVN in collaboration with the Smithsonian Asian Pacific American Center, developed elementary and middle school curriculum. The NVN continues to honor the American WWII soldiers of Japanese ancestry by promoting, protecting, and preserving their legacy of uncommon valor and selfless service for future generations.