By: Penny Stocks to Buy, Picks, News and Information | PennyStocks.com - Feed
Are These On Your List Of Robinhood Penny Stocks Today?

When you look for penny stocks to buy, is there a criterion involved? Do you look for short squeeze stocks or possibly ones that insiders are buying? Or do you look at other things, namely the ability to actually trade penny stocks? In many cases, certain brokerage platforms restrict access to certain companies.

One of the most popular platforms, Robinhood, has something like this in place. The app doesn’t allow its clients to trade (for the most part, OTC stocks. While there have been few exceptions to the rule, most stocks on Robinhood are listed on major exchanges like the NYSE and Nasdaq.

But, since most funds don’t touch OTC penny stocks in the first place, it might not make a huge difference. On top of that, the higher levels of liquidity on those major exchanges lends itself to allowing traders to enter and exit positions easier.

But here’s the tough thing for some to grasp: what about buying really cheap stocks on Robinhood? I’m not talking about $2-$5 stocks; I’m talking about stocks to buy for under $1 on Robinhood. The tough part about finding stocks like that is these major exchanges require companies to meet certain criteria, including a minimum price threshold.

Penny Stocks To Buy Under $1 On Robinhood

This minimum threshold just so happens to be the $1 level. If a company remains below that price for too long, there’s a risk the penny stock could be delisted and sent packing to the OTC. Yes, there is plenty of risk due to this fact alone. But when you’re talking about stocks under $1, in general, even a few pennies can mean big gains. So let’s take a look at some f the popular penny stocks on Robinhood under $1 right now. Are they worth the risk? I’ll let you decide.

One of the cheap “meme stocks” on Robinhood’s restricted list earlier this year was Zomedica. When the first big breakout came in shares of GameStop stock and AMC, other issuers followed. ZOM experienced a mix of speculative hype stemming from a Carol Baskin video, plus Reddit buying sparked a big move. Since then, things have settled down a bit. But recent trading action has attracted some attention. For those just beginning to look at this company, Zomedica specializes in developing veterinary diagnostic products and has a lead product: TRUFORMA.

The last 4 days of action have seen some of the most above-average daily volumes of the quarter so far. What has been a driver of this action? Following its latest earning results, traders seem focused on what CEO Robert Cohen discussed in a business update earlier this month. “After a delay due, in part, to the unexpected sale of our distribution partner and the lack of completion of the fT4 and ACTH assays from our development partner, we have implemented a new plan to place TRUFORMA(R) Instruments in veterinary clinics…from July 13 (th), when we began the program, to yesterday, we have secured 41 signed Instrument placement agreements and have installed 25 TRUFORMA(R) Instruments under our Customer Appreciation Program.”

With somewhat of a timeline discussed, traders have begun focusing on what the future holds for Zomedica and if it will deliver on these initiatives set forth. 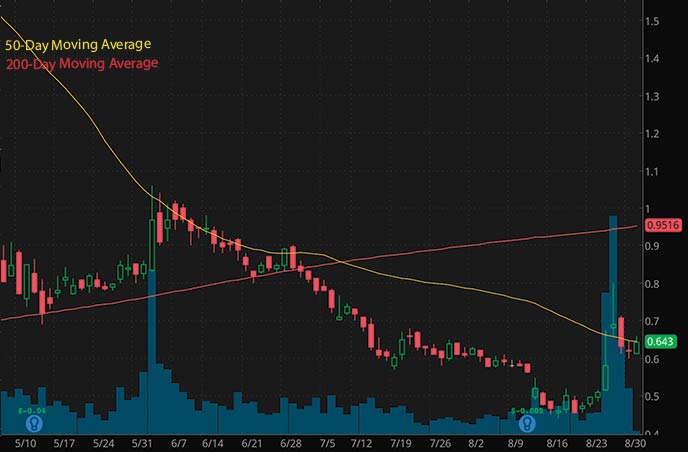 Shares of Farmmi have been steadily trending for the past month. This aligned with the company’s release of its latest financials for the second quarter. Farmmi reported a 31% jump in revenue and a 41.6% increase in gross profit, with net income jumping to $1.36 million. What does Farmmi do?

For those unfamiliar, the company is an agriculture supply company specializing in mushrooms. These aren’t the psychedelic kind like popular culture has recently focused on. I’m talking about things like edible, retail mushrooms, and fungi. For instance, the company’s popular line of Shitake actually helped drive growth in the quarter after experiencing its own 38% increase in sales to over $10 million.

You’ve also got Farmmi inking multi-product sales deals to continue this growth. Over the last few weeks, this has been the case for the company. Its subsidiary Zhejiang Farmmi Biotechnology Co., Ltd., recently closed a multi-product deal with customers in Vancouver, Calgary, and Winnipeg, Canada. With this growth as the backdrop and growing interest in cheap stocks on Robinhood, will FAMI be one of the penny stocks on your list heading into September? 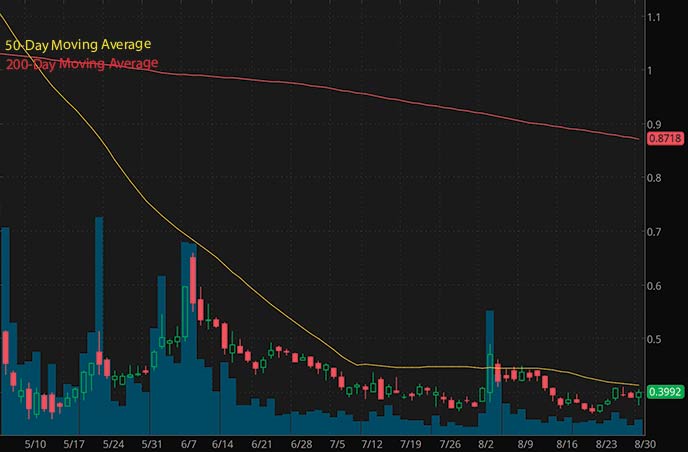 Energy stocks have been on the move recently. Camber is falling into this trend as well. The company specializes in offering energy solutions to commercial and industrial clients in North America. Traditionally focused on oil and natural gas, Camber’s latest initiative has it expanding its ESG footprint. This isn’t a new trend, necessarily, but the environmental community has begun pushing for companies to become more responsible. This is through its internal HR efforts and how the organization engages with and potentially impacts surrounding communities.

For instance, Camber’s subsidiary, Viking Energy Group, recently entered into an exclusive intellectual property license agreement with ESG Clean Energy LLC. The deal gives Viking access to ESG’s patent rights and know-how concerning stationary electric power generation. Basically, ESG’s platform is designed to generate clean energy from the heat generated from combustion engines and use the “waste heat” to capture all of the carbon dioxides that come from the engines. This deal came just a few weeks after Camber acquired a majority interest in Simson Maxwell, a company that manufactures industrial engines and power generation supplies.

With a pivot toward ESG, while still operating its core business, Camber has attracted some attention over the last few weeks. In fact, since August 20th, CEI stock has rallied by over 60%. 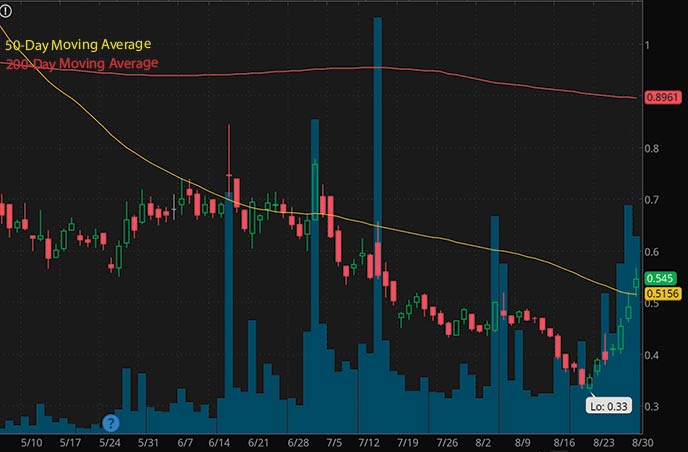 Energy isn’t the only emerging trend that retail traders have followed. Financial technology (FinTech), communications, and connected technologies have also gained a place in the daily discussion. Greenpro Capital has focused its efforts on myriad initiatives within each. Everything from cryptocurrency lending and NFT investing to acting as an incubator for internet connectivity companies like Agkasa-X, Greenpro has extended its reach in attempts to scale its business rapidly.

Read more: Why These Penny Stocks Should Be On Your Watchlist Right Now

This week the company confirmed a long-awaited dividend distribution in relation to SEATech Ventures Corp. The publicly-traded company is one of Greenpro’s other incubator companies. SEATech is also an incubator focused on companies in South East Asia looking for Asia’s next unicorn companies. In the latest update, Greenpro shareholders will receive 1 share of SEAV stock for every 10 shares of GRNQ stock they hold. CEO CK Lee said, “We are very pleased to reward our loyal shareholders with this valuable dividend. We are planning several more dividends in the near future of other companies that we are currently incubating.”

With growing interest in Greenpro’s pipeline of incubator projects, this latest event has sparked momentum in shares of GRNQ stock. Will it remain one of the Robinhood penny stocks under $1 for long? 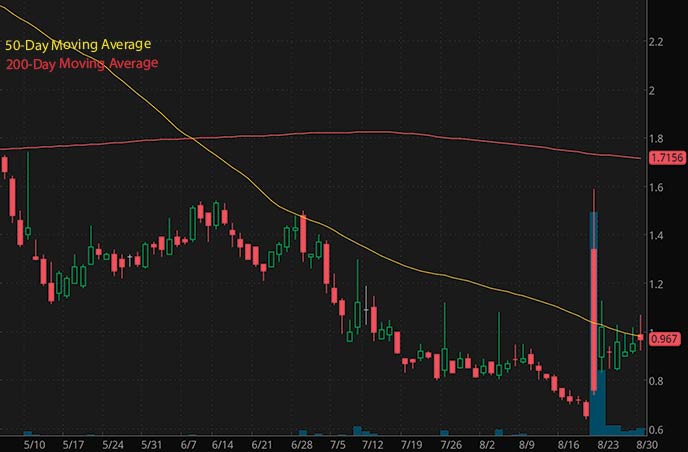 Are Penny Stocks Worth The Risk?

When it comes to finding penny stocks to buy, weighing risk and reward is obviously important. The lower the price, though, the more that becomes clear. A $5 penny stock that drops 50 cents loses 10% of its value, and so would your position. But the $1 penny stock that drops $0.50 just saw its value cut in half. So whether you’re looking for a way to capitalize on small moves quickly or wanting to invest in penny stocks during their early phases of growth, price, as well as other technical and fundamental factors, should always be kept in mind.