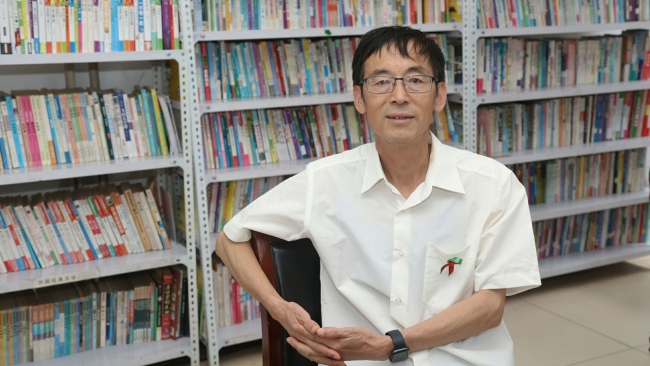 As a physician treating children living with HIV at an infectious disease hospital in Shanxi, China, Guo Xiaoping hatched an ambitious plan. His goals? To create a place for the students to learn and live and to help reduce the intense stigma they often face from external communities.

“I started with an informal classroom in the hospital,” recalls Guo. “We vacated an area, borrowed a blackboard and asked the doctors and nurses on duty to teach the children math and writing skills such as pinyin.”

One year later, Guo and his team founded Linfen Red Ribbon School, China’s first residential boarding school that caters to the needs of children living with HIV. Today, 32 children, many of whom are without parents or family members, live and study at the school. In addition to their lesson plans, they receive ongoing care and learn how to manage their HIV long term.

A number of children at the school, like other people living with HIV around the world, have been ostracized because of their HIV.

“They are rejected by people around them. They have no family, friends or playmates, and they are refused by the local school,” Guo explains. “Some children have not received an education, so they need to be taught how to read characters from scratch.”

The school not only works to get the children caught up academically and nurture their wellbeing, but it also aims to spread awareness and garner support in the community.

“I hope we can eliminate the fears caused by people not understanding the disease,” Guo says. “If everyone continues to discriminate against people living with HIV, people will still feel forced to conceal their conditions or avoid treatment, which leads to a vicious cycle.”

For everyone involved, the safe place that Guo and his colleagues have built is more than just a school.

“Over the years, we’ve been deliberately creating a family atmosphere for the students in various ways,” he says. “For example, teachers spend time with students during holidays and for other activities like barbecues. We hope this helps fill some of the missing parts in these students' lives.”

The school has had 54 students pass through its doors since it opened in 2005 and is funded in part by the Beijing Changier Education Foundation, an organization that Gilead supports. Many of the students have gone on to get married or attend college, and witnessing their success is deeply rewarding for Guo.

“These children living with HIV significantly impress me. Even as they are faced with adversity, they work hard to realize their dreams,” Guo says. “I have a close bond with these students. It’s a kind of bond that cannot be broken.”