By: TechCrunch
We sometimes take for granted that most anyone who wishes to become say, an Uber driver, can do so. But that assumption is a narrow view considering there are many people who would love to earn income in that way but can’t because of lack of car ownership (and all that goes with it) — […]

We sometimes take for granted that most anyone who wishes to become say, an Uber driver, can do so. But that assumption is a narrow view considering there are many people who would love to earn income in that way but can’t because of lack of car ownership (and all that goes with it) — especially in countries outside of the United States.

In an attempt to remedy that problem, São Paulo-based Kovi was founded in 2018 to give those people access to those opportunities.

Kovi today is announcing it has raised $104 million in a Series B round of funding co-led by Valor Capital Group and Prosus Ventures. Quona, GFC, Monashees, UVC Investimentos and Globo Ventures also participated in the financing, in addition to Tinder co-founder Justin Mateen and PayPal co-founder Peter Thiel through his family office. The round takes Kovi’s total equity raised since inception to about $145 million. The company also recently closed on a $20 million debt facility. It is not yet a unicorn, according to execs, who declined to reveal valuation.

Two former 99 (Brazil’s first tech unicorn, and also known as Didi) executives, Adhemar Milani Neto and João Costa, started the company, which rents vehicles to on-demand drivers who work for ride-hailing companies such as Uber, Didi and Lyft. It then expanded from on-demand drivers to food delivery workers.

Why Latin American venture capital is breaking records this year

Kovi operates its “all inclusive” car subscription model under the premise that more people in Latin America would work for these companies if they could afford to operate the necessary vehicle. In fact, an estimated 75% of Latin Americans cannot own a vehicle because of the high cost of acquisition and maintenance. Cars are significantly more expensive in countries like Brazil than in the U.S. and the difference is even greater when it comes to the average income of the population. Also, financing is often difficult and expensive to obtain, as credit is difficult to access in most Latin American countries. When applying for loans, 60% of applications are denied by traditional banking institutions, according to Kovi co-founder and CEO Adhemar Milani Neto. And even when approved, customers pay high interest rates that are up to 30% per year.

Kovi gives drivers who don’t necessarily want, or cannot afford, to own a vehicle “quick access to quality cars” at what it says is “a fair price.” It operates an asset-light model, in that it does not buy vehicles but instead has inked rental agreements with OEMs such as Toyota and Volkswagen to offer vehicles to gig workers, including insurance and maintenance.

“Our mission is to promote a revolution in this market, making car ownership affordable, less complicated and accessible to an underserved population,” Neto said. “We want to offer a range of options to create a platform for urban mobility and create more possibilities for our customers.” 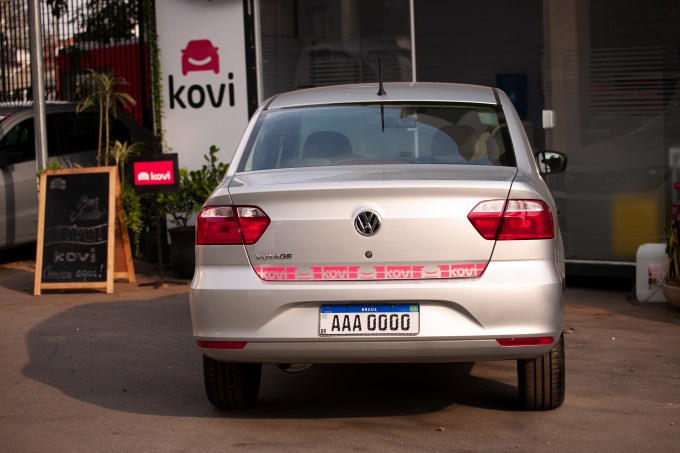 In 2020, the startup saw its number of customers grow by more than 70%, and it now has more than 11,000 users in Brazil and Mexico. The company has 12,000 cars in its fleet and aims to add another 20,000 cars by the end of 2021. The company says its ARR (annual recurring revenue) is now roughly around $45 million, and that it is growing by at least 15% month over month. Kovi is “very close” to breaking even and plans to this year, according to Neto.

“Our mission is to make car ownership more inclusive, human and efficient using technology and financial innovation,” he said.

What sets Kovi apart from competitors is that its cars are connected, so it uses data science and analytics to be able to offer “a better user experience and competitive prices,” believes Kovi co-founder João Costa.

“We basically built an insurance company from scratch,” Neto said.

When the pandemic hit in 2020, Kovi — as did many other companies — at first saw its business slow. So the company quickly pivoted by changing its model to a pay-per-mile model so that it could act as a “Root Insurance for car owners,” Neto said.

The model has worked very well for drivers, he added. The company also enhanced its B2C offering so that drivers can access a car, with “everything included,” from insurance to 24-hour road support and preventive maintenance through Kovi.

“Once things got more back to normal, the on-demand economy scaled really fast,” Neto said.

Kovi also in the past year broadened its scope from a short-term car subscription to include a long-term option. That has proven successful so far, with that segment of its business growing to 35% of Kovi’s revenue already since launching in October of last year.

This also creates more profit for the OEMs Kovi is partnered with, Neto added.

“We provide a much better profitability model for them rather than just to sell to rental companies or end consumers. They make recurring revenue for 12-24 months and then resell used cars through their dealerships,” he said. “We’re now taking Kovi to the broader OEM market. We see this as a global business model that extends not only in Brazil and Mexico but across LatAm and to other developing countries.”

Indeed, Kovi will use its new capital to expand its service to new cities in Latin America and double down on existing operations in Brazil and Mexico. The money will also go toward technology development, specifically data management and the company’s pay-per-mile capabilities (which its founders say is unprecedented in Latin America). It also, naturally, plans to add to its 700-person team — including hiring developers, software engineers and data scientists. And, finally, Kovi plans to use some of its fresh capital to launch new financial services and products.

For example, the company began the buildout for some of those products earlier this year, launching its aforementioned auto insurance offering, dubbed Kovi Seguro — a tracked insurance for app drivers. It also plans to launch “to a rent to own” option, Neto said. So that drivers who want to own a vehicle will have a way to work toward that.

Prosus’ Banafsheh Fathieh says that ultimately, Kovi is a financial services company that can offer consumers that may not qualify for credit under traditional models to incrementally work toward owning a car through a subscription plan.

“Because Kovi owns and manages their fleet during the rental period — and therefore can control the fleet remotely — it is able to cater to a severely financially underserved population that’s typically considered higher risk by creditors,” Fathieh told TechCrunch.

Valor co-founder and managing partner Scott Sobel believes that Kovi is “well positioned” to capture three major tailwinds that have the potential to disrupt the multibillion-dollar car ownership market of Latin America.

The first of those tailwinds is ride-hailing.

“Only in Latin America there are approximately 1.5 million on-demand drivers, and this number is expected to grow by ~2-3x this decade,” he said. “Take Uber as an example: three of its biggest markets are São Paulo, Mexico City and Rio de Janeiro.”

The second tailwind is car subscription. Less than 0.5% of Brazilian cars are under subscription offerings, and that number is expected to reach ~10-20% in the next five years due to consumer behavioral changes.

“Being one of the first movers in LatAm gives Kovi an edge,” Sobel told TechCrunch.

The third tailwind is auto insurance, which he thinks will be disrupted by more flexible (such as pay as you go, pay per mile, unbundled policies) customer-centric and tech-driven models.

“These global trends will provide greater access to millions of drivers in the region,” Sobel said. For example, as of now less than 30% of Latin American drivers have an active car insurance policy.

Valor, he added, was impressed with Kovi’s traction and the “strong competitive moats” the company has built, including verticalized maintenance centers designed to reduce idle time and costs, a driver’s wallet, IoT systems integrating the entire fleet and “all the data.”