Hot Penny Stocks For Your List in August? Check These 3 Out

With August around halfway done now, many penny stocks investors are searching for the best small-caps to watch. To do so, we have to consider what’s going on in the stock market right now.

After a mostly flat trading day yesterday with both penny stocks and blue chips pushing up in afternoon trading, the market appears to be in a state of flux. This is the result of the Delta variant and the rising Covid cases as a result. In the past two months, investors have gone from overly bullish on economic recovery to slightly conservative due to the new variant.

But, with penny stocks, there is always an opportunity to make gains as a result of news or speculative events. Considering that penny stocks don’t like to play by the rules, when the market is down, we often see certain penny stocks pushing up in big numbers. So, for these reasons, investors should keep a keen eye on the state of the pandemic as it relates to the market.

In addition, factors such as jobs reports, the new Infrastructure package, and others, are all aiding in the high volatility we are witnessing right now. So, use these as an advantage, and consider how they may affect certain companies on your list of penny stocks or industries at large. With all of this in mind, let’s take a look at three hot penny stocks to watch for your list in August.

ABEV is a leading penny stock that has been a staple for many investors throughout the pandemic. If you’re unfamiliar, this is a company that sells beer, soft drinks, and other various beverage products. In addition to beverages, the company distributes and sells food products as well. Some of the brands under the Ambev umbrella are Budweiser, Bud Light, Stella Artois, and Corona among many others.

Because of the popularity of its brands, Ambev is one of the biggest names in the beverage market. And with alcohol specifically, we often see high demand during both times of economic hardship and prosperity. So, many have coined ABEV as a reopening penny stock for this reason.

On July 31st, the company released its second-quarter results for 2021. The company’s premium portfolio volumes went up 35% year over year. In addition, its net revenue increased by more than 36% during the quarter. And lastly, its EBITDA and normalized profit increased by 24% and 116% respectively in the second quarter too. These numbers are highly positive and reflect the companies commitment to growth and the positivity around the alcohol and beverage industry.

“This quarter, we completed one year since the negative impact of the first wave of COVID-19 pandemic. And I’m happy to see that the choices we made in the past 12 months continue to deliver results. We achieved the highest consolidated volumes in a second quarter on record, which led to an all-time high rolling 12 months volumes, 5 million hectoliters above the peak back in 2015.”

The CEO of Ambev, Jean Jereissati

Keeping this new announcement in mind, is ABEV going to make your penny stock watchlist? 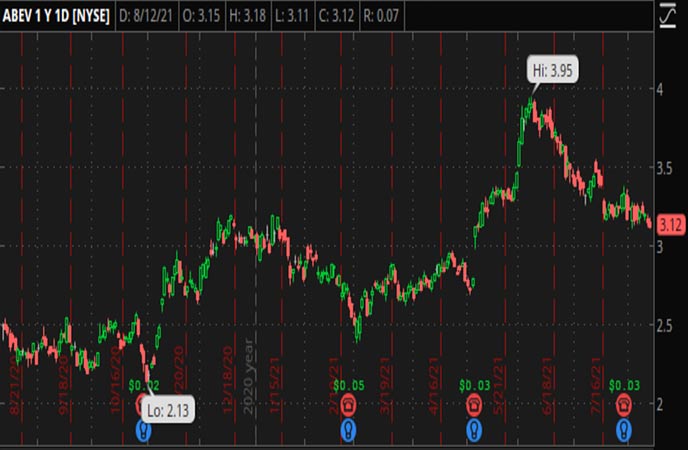 In the past month, shares of KXIN stock have climbed by over 40%, including an almost 10% gain on August 12th. Kaixin has become a big name in the Chinese auto industry, providing a large range of services to its customers. Specifically, this company operates 14 used car dealerships located in China and provides insurance, extended warranties, and more. In addition to this, it has partnerships with financial institutions to round out its vertically integrated car buying business model.

On August 10th, the company announced plans to sell smaller-size electric vehicles. Kaixin has already started discussing mergers and acquisitions with various electric car manufacturers to speed up this process. This is something that KXIN investors should look out for, as a large merger or acquisition deal could potentially have an effect on its future outlook.

This announcement comes just a few days after the company announced that it is entering the EV market broadly. Right now, the EV industry is on fire with leaders like TSLA stock and LCID stock gaining the most attention. However, KXIN has an opportunity to become a major player in the Chinese EV market. And while it won’t necessarily be a pure-play EV stock, it could benefit greatly from this industry. 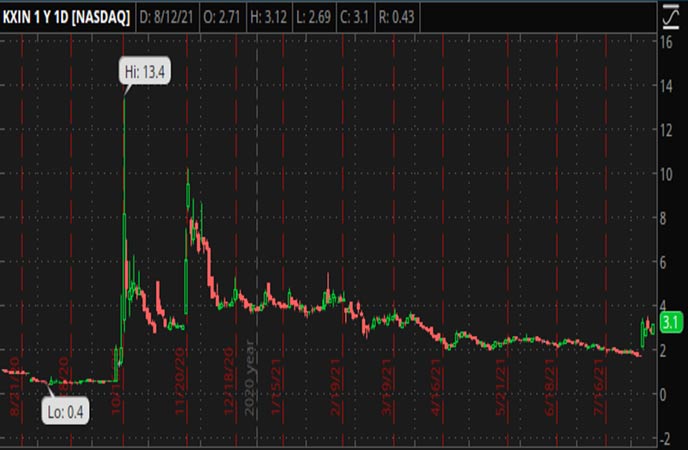 Vinco Ventures Inc. is a penny stock that has increased in value by around 10% in the past five days. For some context, Vinco creates and sells various products including toys, electronics, home items, and more. These items are sold to manufacturers, distributors, and retailers via e-commerce. Additionally, Vinco has moved into the PPE market, selling personal protective equipment to hospitals and government agencies.

On August 4th, Vinco’s subsidiary Emmersive Entertainment announced an NFT music streaming platform. The first release via the platform will be singer Tory Lanez’s “WHEN IT’S DARK” project. 1 million copies of the album will be sold via E-NFT.COM and is the only way for fans to experience the album. The blockchain industry has grown substantially this year and doesn’t show any signs of slowing down. Because NFTs have become a big part of the hype around blockchain, any companies involved have likely seen increased popularity.

“The launch of the Emmersive Platform, led by the limited-edition release of Tory Lanez’s latest album is revolutionary. When combining this with the traffic that can be generated through Lomotif, we expect to build one of the largest NFT platforms in the music business.”

With all of this in mind, will BBIG make your list of penny stocks to watch? 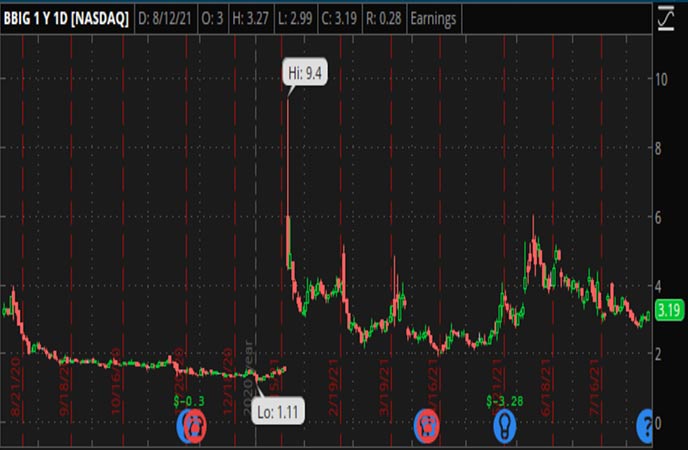 Which Penny Stocks Are You Watching Right Now?

With so much to look forward to in the coming months, many investors remain excited about the future of penny stocks. While it is difficult to predict where the market is headed, higher vaccination rates and case numbers potentially hitting peaks mean that we could be near the end of the woods.

Considering this, there are plenty of potentially valuable penny stocks to watch right now. So, which small-caps are on your watchlist in August 2021?