2 Tech Stocks to Buy for a Second-Half Rally

By: StockNews.com
Netflix (NFLX) and Advanced Micro Devices (AMD) are two stocks that have underperformed so far this year. Taylor Dart explains why both stocks are setting up for a second-half rally.

It's been an impressive year thus far for the Nasdaq Composite (QQQ), with the index up more than 15% year-to-date, knocking on the door of the 15,000 level. This strong performance in the face of multi-year high inflation readings and fears surrounding a 4th COVID-19 wave is even more impressive, but it's made it very difficult to find any bargains in the market. In fact, we have more than 60 growth stocks now trading at above 35x sales, the highest reading since this bull market began a decade ago. However, while most names look very expensive, two names look like solid buy-the-dip candidates. In this update, we'll look at these two names and assess their ideal buy-points. 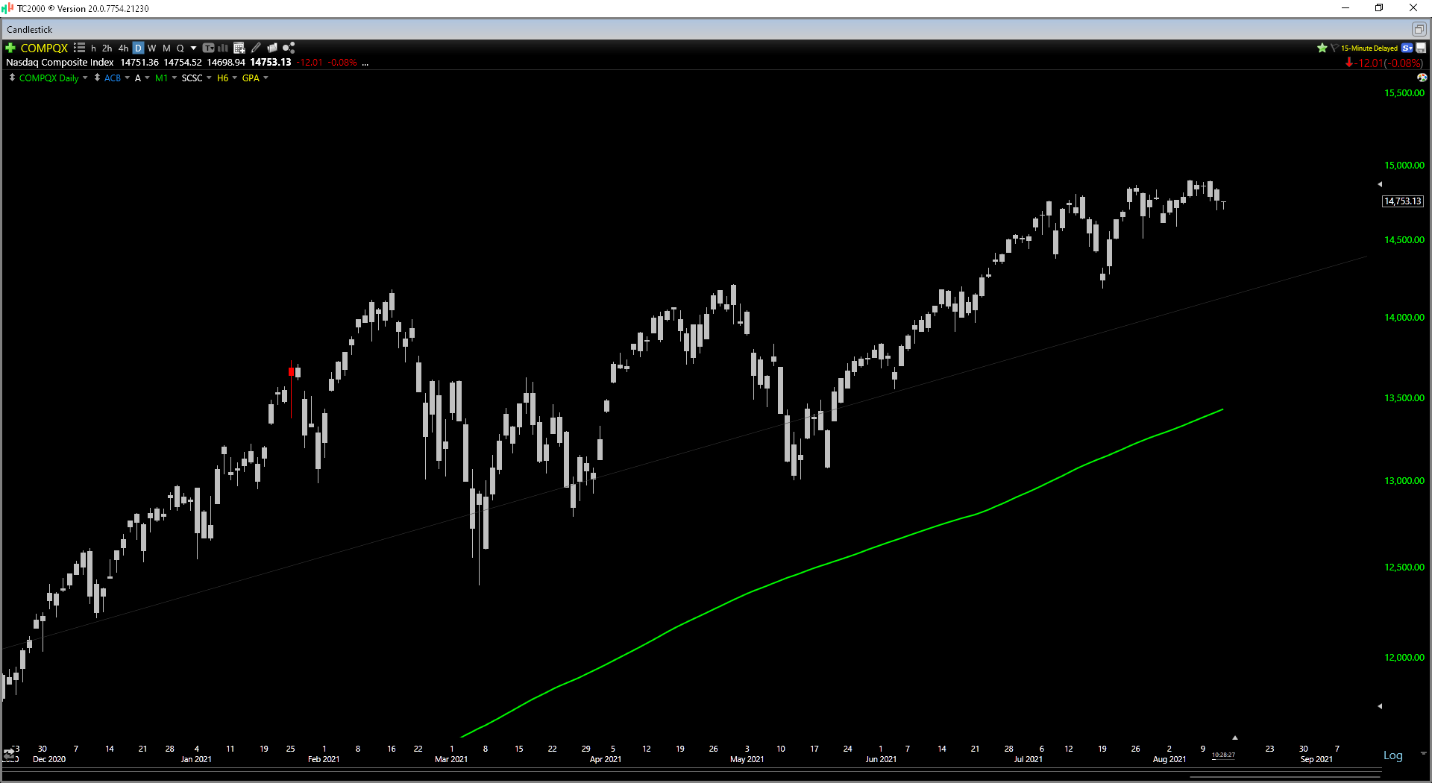 While high-flyers like HubSpot (HUBS) and Bill.com (BILL) are up more than 50% year-to-date, Advanced Micro Devices (AMD) and Netflix (NFLX) have been unable to keep up with the S&P-500 this year, up 15% and down 5%, respectively. This underperformance has left these stocks trading at more reasonable valuations than many of their peers, with NFLX looking much more undervalued in a rare period where it actually has a negative 12-month return. This is even though NFLX is on track to grow annual earnings per share by more than 65% in FY2021 alone. In AMD's case, annual EPS growth is accelerating after a massive year in FY2020, with FY2021 annual EPS growth projected at 104%, up from 87% growth last year. While not as cheap as Netflix, AMD is also reasonably valued, assuming if it can meet its FY2023 earnings targets. Let's take a closer look at both companies below:

Beginning with AMD, the stock broke out of an 11-month base recently following an exceptional earnings report in late July. The company reported 250% growth in quarterly earnings per share to $0.63 and 99% growth in revenue to $3.85BB, a 600-basis point acceleration from 93% revenue growth in the most recent quarter. The outstanding results were helped by strong demand for its products, with Computing & Graphics revenue up 65% year-over-year by higher client and graphics processor sales, bolstered by better selling prices. Meanwhile, the Enterprise, Embedded & Semi-Custom segment was up 183% year-over-year and 19% sequentially, driven by higher EPYC processor revenue and semi-custom product sales. The blow-out report prompted AMD to raise guidance to 60% revenue growth year-over-year. Notably, it wasn't just revenue that beat expectations, but also margins due to pricing power, with gross margins up to 48%, a 400 basis point improvement from the year-ago period.

If we look at AMD's earnings trend, we can see that annual EPS is expected to accelerate materially in FY2021, and the growth isn't projected to slow much in FY2022. This is based on current estimates of $2.45 for FY2021 and $3.02 in FY2022. If we look out further to FY2023, annual EPS is expected to climb to $3.69, leaving AMD trading at roughly 35x FY2022 estimates and ~29x FY2023 estimates. This does not offer much of a margin of safety, even if this is an incredible growth story, suggesting that while AMD is a great name to keep on one's shopping list, it might be best to be patient for a deeper pullback before starting new positions. Let's look at the technical picture: 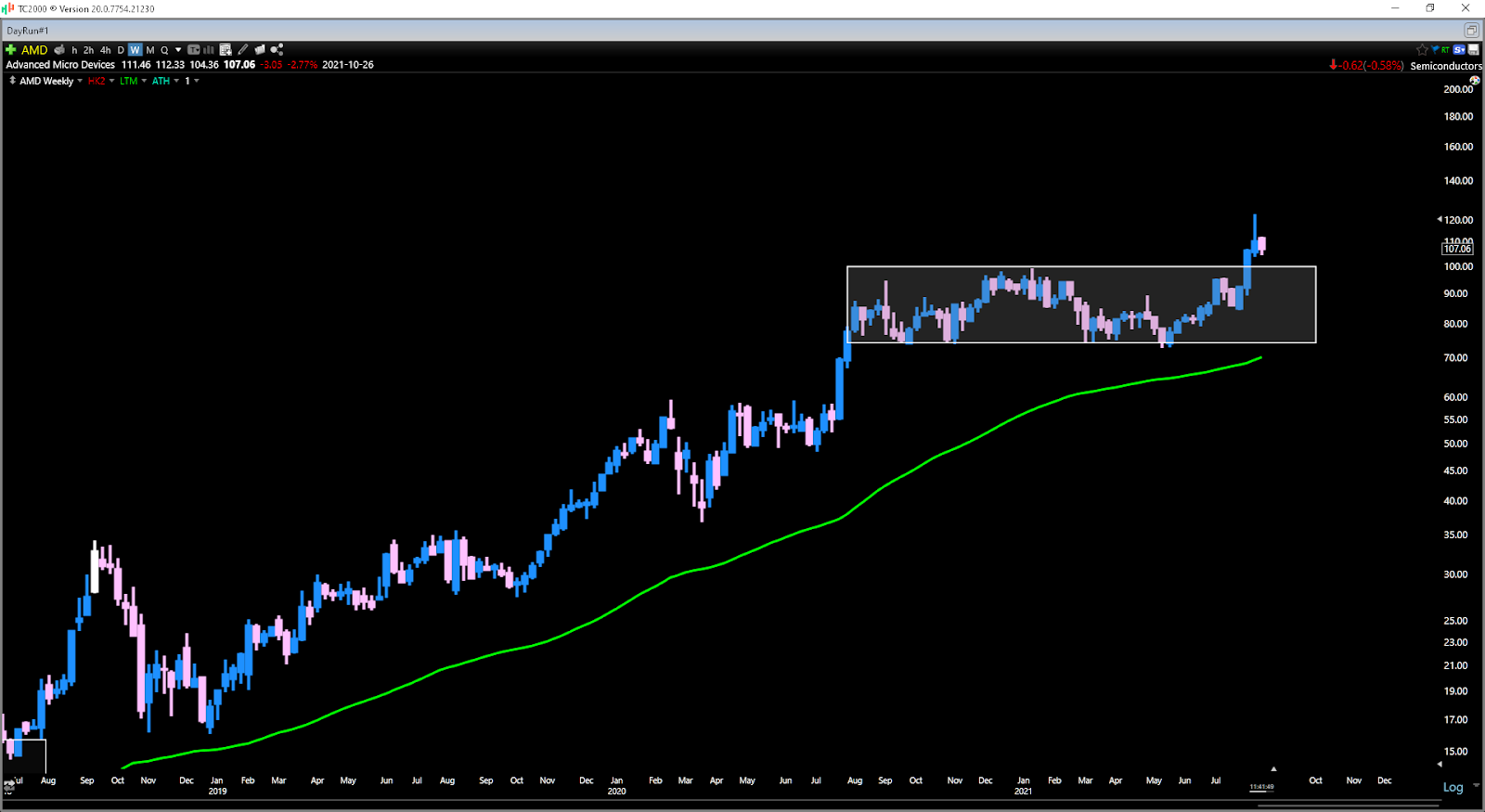 As shown above, AMD broke out of a large base last month, and for the time being, continues to trade above the top of this base. Generally, I prefer not to buy breakouts in over-extended markets as they can be very failure-prone, but if AMD were to pull back to the top of this base near $95.50, this would offer a much lower-risk entry point. This is because it would allow many traders who bought the breakout to be shaken out of their positions, yet would do very damage to the larger technical picture, which will remain bullish above $85.00 per share. A pullback of this magnitude would also leave the stock short-term oversold and trading at a more attractive valuation of 31x FY2022 annual EPS estimates. In summary, while I think AMD should do well over the next year, I believe the best setup is waiting for a deeper pullback to oversold levels.

Moving over to NFLX, the stock already has a material margin of safety baked in, and sentiment on the stock has soured considerably, with NFLX being the worst performer among the FAANG group. Unfortunately, while NFLX posted strong revenue growth of 19% (lapping 25% in Q2 2020) and beat expectations for subscriber growth in Q2 (1.54MM vs. 1.2MM), it guided a softer Q3 than analysts were hoping for, with an outlook of 3.5MM paid net additions. This has increased speculation that the new streaming entrants into the space are making it very difficult for NFLX to continue growing at its previous pace, weighed down by fierce competition from Disney (DIS), Hulu, and HBO. The good news is that even if this is partially correct, Netflix looks to have priced in some of this deceleration, trading at 37x FY2022 estimates. Over the past five years, NFLX has traded in a range between 50 and 300x earnings, with NFLX now catching up to its valuation after consolidating for the past year.

In a surprising pivot, NFLX announced that it was in the early stages of expanding into video games, with it viewing gaming as another content category, similar to its expansion into original films. Competition in the gaming space is just as fierce as film, but NFLX stated that it would be including video games in its members' subscription costs, similar to how AMZN has bolstered its Prime offering with Music and Video, making it stickier for the average consumer and providing significantly more value. If NFLX is successful, this could revitalize the stock and help the stock regain its premium multiple relative to its high-growth tech peers. Notably, the company is churning out more free cash flow than previously, so investments in gaming are easily supported by its free cash flow generation. This reinforces the view that it can expand into new categories and make relatively low-risk bets, similar to what has made Amazon so successful.

Moving over to Netflix's earnings trend, we can see that the company is expected to grow annual EPS by nearly 70% this year, with 30% plus growth expected next year as well. If we look ahead to FY2023, annual EPS is expected to grow 192% from FY2020 levels, making NFLX one of the highest growth names in the tech space, despite being a mega-cap. This earnings growth rate easily justifies a multiple of 45, which would translate to a fair value of $672.00 based on FY2023 annual EPS estimates of $17.77. I would argue that an earnings multiple of 50 is conservative as well, translating to a higher target of $888.50. If we use the higher target and slightly richer multiple, the target offers over 70% upside from a share price of $508.00. Based on more conservative multiple of 45 and the lower target, there's more than 32% upside. Therefore, I see NFLX as a steal at current levels, and believe this pullback has provided one of the lower-risk entries in the past few years. This is corroborated by the technical picture, which shows NFLX pulling back to its weekly moving average (green line), which has provided a buying opportunity on the past several occasions. 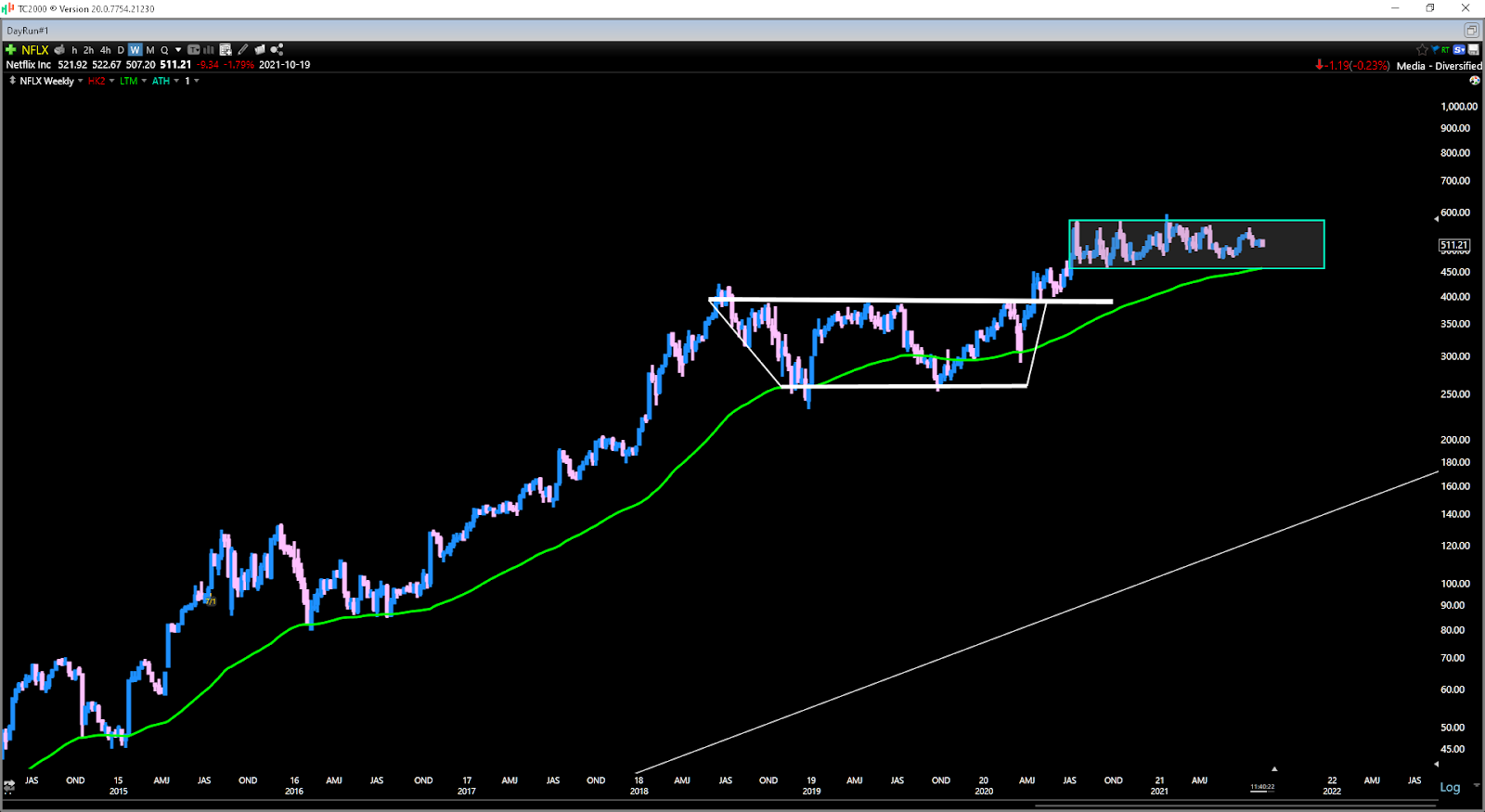 While it's hard to find value out there in the tech space, NFLX and AMD look like two names worth keeping at the top of one's shopping list. For AMD, the low-risk buy point comes in at $95.00 if the stock can re-test its recent breakout. For NFLX, the stock looks very reasonably valued at current levels, and I remain long the stock from an average cost closer to $450.00. If we were to see a dip below $480.00, I would look to add to my position.

Disclosure: I am long NFLX, AMZN

Disclaimer: Taylor Dart is not a Registered Investment Advisor or Financial Planner. This writing is for informational purposes only. It does not constitute an offer to sell, a solicitation to buy, or a recommendation regarding any securities transaction. The information contained in this writing should not be construed as financial or investment advice on any subject matter. Taylor Dart expressly disclaims all liability in respect to actions taken based on any or all of the information on this writing.

About the Author: Taylor Dart

Taylor has over a decade of investing experience, with a special focus on the precious metals sector. In addition to working with ETFDailyNews, he is a prominent writer on Seeking Alpha. Learn more about Taylor’s background, along with links to his most recent articles.

The post 2 Tech Stocks to Buy for a Second-Half Rally appeared first on StockNews.com
Data & News supplied by www.cloudquote.io
Stock quotes supplied by Barchart
Quotes delayed at least 20 minutes.
By accessing this page, you agree to the following
Privacy Policy and Terms and Conditions.