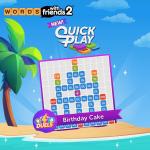 Today, Zynga Inc. (Nasdaq: ZNGA) a global leader in interactive entertainment, announced that in conjunction with the game’s 12th birthday, July 19 has been proclaimed ‘National Words With Friends Day’. This special holiday kicks off a two week in-game festival for fans featuring a slate of exciting gameplay events, challenges, special celebrity guests and sweepstakes that honor the game’s love of words and ongoing spirit of friendly competition.

“Mark your calendars: Words With Friends is more than just a game; it’s part of our culture and our vernacular,” said Bernard Kim, President of Publishing at Zynga. “Over the past 12 years, it's grown from a popular app to a global sensation, and we’re excited to celebrate this first annual national day and festival with our fans in the game we all love.”

To introduce an all-new feature, from July 19 – 25, players can participate in a community-wide competitive event called ‘Choose Your Side’. Joining either team ‘Early Bird’ or team ‘Night Owl’, players will accrue points for their side by completing moves in their Classic matches. At the end of this week-long event, the winning team will receive a limited edition reward while the other team receives a consolation prize.

Week two of the birthday bash brings a trendy take on the game’s single player mode, as real-life social media influencers will star as the opponents in the ‘Influence This!’ Solo Challenge. Running from July 27 – August 1, for the first time ever, celebrities will represent each rung in the challenge ladder, featuring social media sensations including: voice actor, Christy Carlson Romano, who voiced one of the most beloved animated characters of the 2000s; ‘Mom Worthy’ podcast hosts Britt & Sami; standout reality TV star, Victor Arroyo; and music artist and vlogger, Lo Beeston.

The second week of the celebration brings more in-game goodies as players can dig into the 12th Birthday Weekly Challenge to earn a ‘Birthday badge’ to mark the occasion. In a new Quick Play event, players will enjoy a specially themed Duels game board shaped like a birthday cake. Players can also secure their own limited edition Words With Friends 12th Birthday Tile Style, offered the final week of the festivities.

Through the entire festival, players will have the opportunity to turn their Words With Friends birthday wishes into cash through a special sweepstakes event. From July 19 – August 2, players can visit https://sweepstakes.wordswithfriends.com to enter to win the $12,000 grand prize or the $6,000 and $3,000 runner-up prizes.* By participating in the Choose Your Side event, Solo Challenge and other birthday activities, players can earn extra entries to this special 12th birthday giveaway sweepstakes.

Launched in 2009, Words With Friends has grown from popular mobile game to global pop culture sensation. Since then, the franchise has expanded to new platforms like Facebook Messenger, launched a hit sequel with Words With Friends 2 and brought innovative new ways to play to people around the world. The franchise’s success through this more than decade-long journey has been powered by player connections made through quick and clever wordplay that has become a touchstone in fans’ lives.

Zynga is a global leader in interactive entertainment with a mission to connect the world through games. To date, more than one billion people have played Zynga’s franchises including CSR Racing™, Empires & Puzzles™, Merge Dragons!™ Merge Magic!™, Toon Blast™, Toy Blast™, Words With Friends™ and Zynga Poker™. Zynga’s games are available in more than 150 countries and are playable across social platforms and mobile devices worldwide. Founded in 2007, the company is headquartered in San Francisco with locations in the U.S., Canada, U.K., Ireland, India, Turkey and Finland. For more information, visit www.zynga.com or follow Zynga on Twitter, Instagram, Facebook or the Zynga blog.

Related Stocks:
Zynga Inc Cl A
Data & News supplied by www.cloudquote.io
Stock quotes supplied by Barchart
Quotes delayed at least 20 minutes.
By accessing this page, you agree to the following
Privacy Policy and Terms and Conditions.