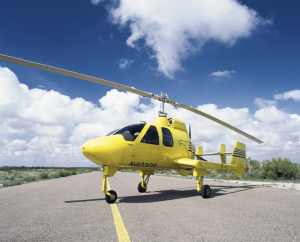 Whilst this Certification Plan is commenced with the Hawk 5, all future Skyworks aircraft can follow this similar path...thus reducing certification time.”— Barry JonesCHICAGO, IL, U.S.A., July 1, 2021 /EINPresswire.com/ -- Skyworks Aeronautics Corp. (“Skyworks”), the global leader in gyronautics, announced that it has started initial certification of its Hawk 5 aircraft.

The Hawk 5 gyroplane uses a free-spinning rotor to provide lift and an airplane engine for thrust. Utilizing an engine-driven pre-rotation system while on the ground, the Hawk 5 is capable of take-off from almost anywhere, allowing for runway independent operations. In flight, the unpowered rotor is always in autorotation, so in the unlikely event of an engine failure, the Hawk 5’s rotor would continue to spin providing a normal glidepath, keeping the pilot in complete control. Since it has no transmission or antitorque equipment, the Hawk 5 reduces both cost and complexity and significantly increases mission reliability, while providing operators greater levels of safety. With its simple but sophisticated aircraft design, the Hawk 5 benefits from operating much like fixed wing aircraft, making it a true one-of-a-kind aviation workhorse.

The Skyworks Hawk 5 certification effort is led by Mr. Barry Jones, Skyworks’ Director of Aviation Operations and Chief Pilot. Also serving as the Managing Director of Skyworks Aeronautics (U.K.) Ltd, he shared, “We have assembled a team of experts that have over 40 years of experience in aircraft certification, from professional certifiers to a graduate of the prestigious Emptier Test Pilot School at Boscombe Down. In my view, this team has the very best possible experience one would want to lead our certification programs”.

The U.K. based team will initially utilize the U.K. CAA Part 21 Approval Process and then exercise bilateral agreements for Certification Ratification with EASA and the FAA.

Mr. Jones added that, “Whilst this Certification Plan is commenced with the Hawk 5, all future Skyworks aircraft can follow this similar path. In fact, all successive aircraft to the Hawk 5 will not require CAA approval and inspection at each stage and can thus be progressed at Skyworks discretion, thus reducing certification time.”

These efforts will also benefit the electric eGyro™ program for which Skyworks recently announced an order for 100 such aircraft with options for an additional 100. Skyworks intends to utilize the same certification route for the eGyro™.

"Skyworks is thrilled that we are starting the Hawk 5 certification effort and are both grateful and privileged to have someone of Barry’s caliber and exceptional experience lead such a great, hand-picked team" said Brig. General (Ret) John E. Michel, Co-Founder and CEO of Skyworks.

As per prior announcements, Skyworks is also currently working on going public via SPAC.

Skyworks Aeronautics is the world leader in the science and technology of gyronautics, focusing on the design and development of high-performance gyroplanes. Skyworks gyroplanes provide more affordable, safer, and higher performance alternatives for runway-independent aircraft.

Skyworks has more than 40 patents with several more underway, all obtained in an effort to radically change not only the way gyroplanes are perceived, but also the way they are utilized. From mass personnel transportation, agriculture, defense, and border protection to changing the economies of developing nations, Skyworks' goal is to change the nature of vertical flight. For more information about the company, its products, and individual members of the Skyworks team, visit www.skyworks-aero.com