Items signed by Einstein, Washington, Lou Gehrig, many others will be in University Archives' June 30th online auction 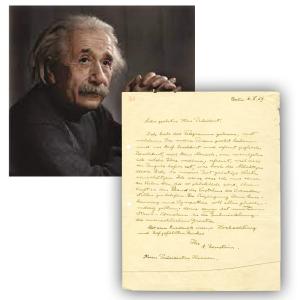 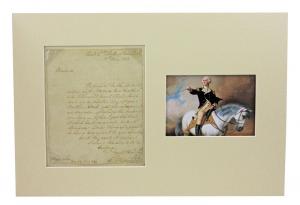 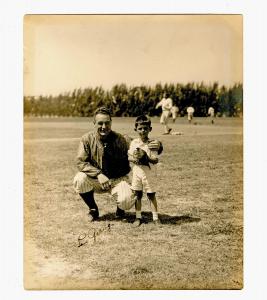 Circa 1933 photo of Lou Gehrig, shown posing with a young boy identified on verso as William Grice Bogg, signed by Gehrig and with Babe Ruth seen in the background (est. $3,000-$4,000). 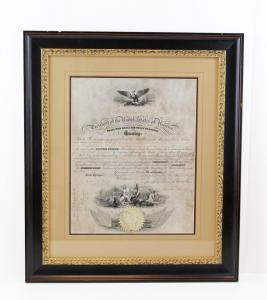 This month, we’re organizing auction first by category and then alphabetically. This way, you can navigate within the section of the sale that most interests you, like superb presidential autographs.”— John ReznikoffWILTON, CT, UNITED STATES, June 15, 2021 /EINPresswire.com/ -- A typed letter written and signed by Albert Einstein to President Herbert Hoover in 1929, a one-page letter penned and signed by future President George Washington in 1783, and a charming photograph of baseball legend Lou Gehrig posing with a young boy, signed, with Babe Ruth in the background, are just a few of the rare autographs, manuscripts, books and photos in University Archives’ online-only auction slated for Wednesday, June 30th.

The auction, packed with 331 highly collectible lots, has a start time of 10:30 am Eastern time. The catalog is up for viewing and bidding now, on the revamped University Archives website (www.UniversityArchives.com), as well as the platforms LiveAuctioneers.com, Invaluable.com and Auctionzip.com. Phone and absentee bids will also be accepted. It’s just the fourth auction that will be conducted from University Archives’ new 6,000-square-foot facility in Wilton, Conn.

“Increasing air travel costs and rental car prices prohibit much traveling this summer, so hop on your laptop and check out our June catalog,” said John Reznikoff, the president and founder of University Archives. “You’ll be able to find rare and valuable pieces relating to a diverse cast of historical figures, from Ludwig von Beethoven, Martin Luther King, Jr., and George Taylor to Clara Barton, Bob Dylan and Emperor Hirohito – a treasure trove in many collecting categories.”

Reznikoff pointed out that regulars to University Archives auctions will note that this sale is organized a little differently. “This month, we’ve opted to organize auction lots first by category and then alphabetically,” he said. “This way, you can easily navigate within the section of the auction that most interests you, like superb presidential autographs from Washington to Biden.”

The gorgeously presented autograph letter signed by George Washington and dated May 15, 1783 was addressed to Miss Sidney Lee, the sister of recently deceased Continental Army General Charles Henry Lee. Washington and Lee had bad blood, but despite this, Washington proved himself a courteous and attentive correspondent, helping Miss Lee obtain a copy of Lee’s will so that she could inherit his estate. The letter carries a pre-sale estimate of $18,000-$20,000.

Albert Einstein’s one-page autograph letter was written in German to President Herbert Hoover after receiving Hoover’s congratulatory 50th birthday message in 1929 (est. $50,000-$55,000). Einstein humbly wrote, “I know I am just one of the many who are so happy to use their energy in the service of the understanding of the Sciences…I alone am but a grain-of-dust in the development of the human spirit.” Just one other letter from Einstein to a US President is known.

The circa 1933 photo of Lou Gehrig, shown squatting down to pose with a young boy identified on verso as William Grice Bogg, black and white, taken at an unknown location, is signed by the Yankee great and has an estimate of $3,000-$4,000. Babe Ruth can be seen throwing a ball in the background. Babe Ruth, in fact, also posed with the boy a couple of years later, in a similar pose, around 1935, squatting down. That photo, signed by Ruth, is also up for bid (est. $5,000-$6,000).

Alan Turing, the British mathematician who cracked the Nazi “Enigma” machine during World War II, signed a copy of The Theory of Groups of Finite Order, which he gifted to his Cambridge University mentor (est. $20,000-$24,000). A General Biochemistry textbook signed by Richard Feynman is profusely annotated with over 215 words in his hand in the form of abbreviations, hypothetical questions, flow charts, chemical formulae, and margin notes (est. $6,000-$7,000).

A photograph of Stephen Hawking signed by him as “S.W. Hawking” is accompanied by a letter of provenance explaining that, though Hawking agreed to sign it, he didn’t understand why his signature was considered valuable (est. $20,000-$24,000). Items signed by North Korean leader Kim Il Sung are exceedingly rare, even rarer than Mao Tse Tung. A copy of Kim Il Sung’s 1969 book, Let Us Promote the World Revolution, etc., signed by him, should realize $8,000-$10,000.

A very rare Civil War-dated naval appointment, boldly signed by President Abraham Lincoln and promoting one “William T. Plant” to the rank of Assistant Surgeon in the U.S. Navy, dated April 11, 1862 and countersigned by Secretary of the Navy Gideon Welles, is expected to knock down for $6,000-$7,000. Also, a rare check signed by then-junior Senator from Illinois Barack Obama, drawn from the “Friends of Barack Obama” bank account in 1997, should fetch $8,000-$10,000.

A one-page typed letter signed by Theodore Roosevelt and dated Nov. 14, 1914, written to Oscar King Davis, Press Secretary of the Progressive Party, in which Roosevelt expresses disgust with that year’s election results, should bring $8,000-$9,000. Also, a document dual-signed by John F. Kennedy (as President) and Robert F. Kennedy (as the US Attorney General), appointing George C. Young as a United States District Judge in Florida, has a pre-sale estimate of $7,000-$8,000.

A one-page letter handwritten on both sides and signed by Harriet Beecher Stowe (Uncle Tom’s Cabin), penned from Andover, Massachusetts on Oct. 27, 1852 and containing rare and superb content on slavery, has an estimate of $6,000-$7,000; while the Oberlin College Commencement Exercises Program dated June 14, 1965, signed twice in red ink by Dr. Martin Luther King, Jr., where he delivered the school’s Commencement Address, is expected to garner $5,000-$6,000.

The huge architectural plans for Frank Lloyd Wright’s last Usonian house in Wausau, Wisconsin (circa 1957), a drawing/rendering of the Duey Wright House, signed by Wright, 44 ½ inches by 29 ½ inches, should ring up $6,000-$7,000. Also, a copy of the 1981 soft-cover book Warhol, boldly signed seven times by Andy Warhol himself, plus a drawing by the artist, is estimated to bring $5,000-$6,000. It was an exhibition catalog published in conjunction with a show in 1981.

University Archives has become world-renowned as a go-to source for rare items of this kind. It is actively seeking quality material for future auctions, presenting a rare opportunity for sellers. Anyone who has a single item or a collection that may be a fit for a future University Archives auction may call John Reznikoff at 203-454-0111, or email him at john@universityarchives.com.

University Archives was founded in 1979, as a division of University Stamp Company, by John Reznikoff, who started collecting stamps and coins in 1968, while in the third grade. Industry-wide, Reznikoff is considered the leading authenticity expert for manuscripts and documents. He consults with law enforcement, dealers, auction houses and both major authentication companies.