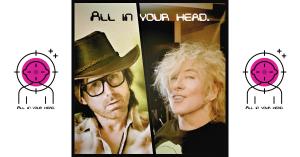 Chip Moreland and Gregory Markel of "All in your head." 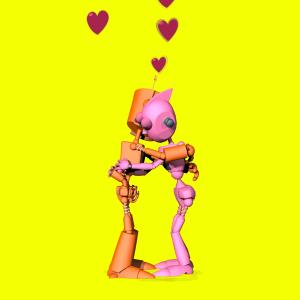 Febo and Rob are featured in the "How does it feel to be real?" VEVO video. 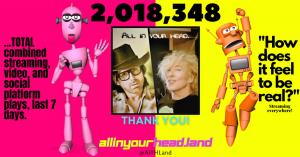 "How does it feel to be real?" generates two million plays in 7 days.

All in your head generate two million combined plays across streaming, video, and social media platforms, and go to number one on SubmitHub.

Make sure to check out this awesome track that’s defined by both art and music!”— KMS ReviewsLOS ANGELES, CA, UNITED STATES, June 13, 2021 /EINPresswire.com/ -- Since releasing their first single and video for “How does it feel to be real?” on June 4th, All in your head have generated over two million combined streaming, video, and social media plays in addition to working their way up the SubmitHub “Popular” chart #1 positions for All Genres, Indie/Alternative, and TikTok. (SubmitHub is one of the premier indie artist discovery platforms on the web.)

This milestone has occurred the past seven days while their VEVO video has amassed 19,000 views on YouTube and was added to VEVO’s “Incoming Indie” playlist, and generated 23,000 views on Facebook. Additionally, the All in your head Spotify profile, having also launched on June 4th as a completely unknown band with zero followers, has amassed 2,500 monthly listeners in just 7 days from social media and blog coverage. Currently, 62% of people that listen to “How does it feel to be real?” on Spotify become followers.

Simultaneously, All in your head have celebrated the release of their debut “How does it feel to be real?”, with an exclusive NFT collection launch on the popular OpenSea NFT marketplace featuring original artwork by both Gregory from All in your head, (Who also goes by “G.”), and noted artist Brian Bernhard.

“How does it feel to be real?” reviews are starting to roll in from playlist curators and bloggers and have included:

“ Make sure to check out this awesome track that’s defined by both art and music!” -KMS Reviews

“Incredible sounds with clear vintage inspiration, very good composition interpreted by quality musicians, it is a pleasure to include it in our playlist” – RockNow2021

All in your head have been thrilled by the numbers “How does it feel to be real?” have generated as an indie band over such a short time prompting band member Gregory Markel, aka “G”, to state, “We were confident in our first song and video, but this two million-plus plays response has blown Chip and I away, thank you to everyone!”

Next up, All in your head will be releasing a Sci-Fi Graphic Novel inspired by “How does it feel to be real?”, with a story by G and artwork by young prodigy Sylver.

"All in your head" is a brand new two-man musically diverse band comprised of multi-instrumentalists and vocalists Chip Moreland of "The Bella Portal," and 4-octave tenor Gregory or "G," a Global Peace Song Award-winner.

The band's name comes from the simple fact that all of life’s experiences take place ultimately "All in your head." Their goal musically is to create music that arrests and transforms the listener to make them feel and/or think within new realms of feeling and perception, about music, about self, about life, about society, and our place in the universe. All in your head see the listeners as an extended part of the band, critical to completing the creative circuit.

All in your head, "How does it feel to be real?"