By: StockMarket.com
Reopening Stocks Are On The Rise, Here’s 3 To Have In Focus

With investors figuring out which stocks to buy now amidst the current frenzy of stock market news, consumer stocks stand out. Indeed, the consumer industry as a whole would be in a good position to benefit from the economy recovering now. Evidently, a key factor to consider would be the current state of the labor market. Throughout May, private payrolls gained by 978,000, beating consensus estimates of 680,000 by a landslide. Now, this would mark the largest increase in this figure since June 2020. When you couple this with initial jobless claims falling to an all-time low, things could be looking up for consumer stocks now.

On one hand, you could look at consumer staples stocks such as Boston Beer (NYSE: SAM) and General Mills (NYSE: GIS). With more consumers being employed, spending in the sector would continue to grow stably and steadily. Additionally, investors on the more conservative end of the spectrum would turn to these companies amidst times of market volatility. This is because they are among the highest-paying dividend stocks in the stock market today.

On the other hand, consumer discretionary stocks like Disney (NYSE: DIS) and Lululemon (NASDAQ: LULU) could also be in focus. For the most part, this would be thanks to their stakes in the reopening trade now. In the case of Disney, the company could be firing on all cylinders. That is considering its industry-leading streaming platform and the reopening of its tourist offerings. Meanwhile, Lululemon’s revenue came in 88% higher in its first-quarter fiscal report yesterday. Overall, consumer stocks appear to be gaining momentum. Could one of these three be worth watching in the stock market now?

Starting us off today is beverage giant, the Coca-Cola Company. No doubt, Coca-Cola remains a household brand that consumers and investors alike would be familiar with. For a sense of scale, the company’s products are sold in over 200 countries and territories across the globe. Its legendary beverage portfolio consists of brands such as Sprite, and Fanta among other sparkling soft drinks. Moreover, Coca-Cola also boasts products in the sports, juice, and coffee and tea markets. As we head into summer, consumers would be more inclined to grab one of the company’s drinks. Could the same be said for investors and KO stock now? 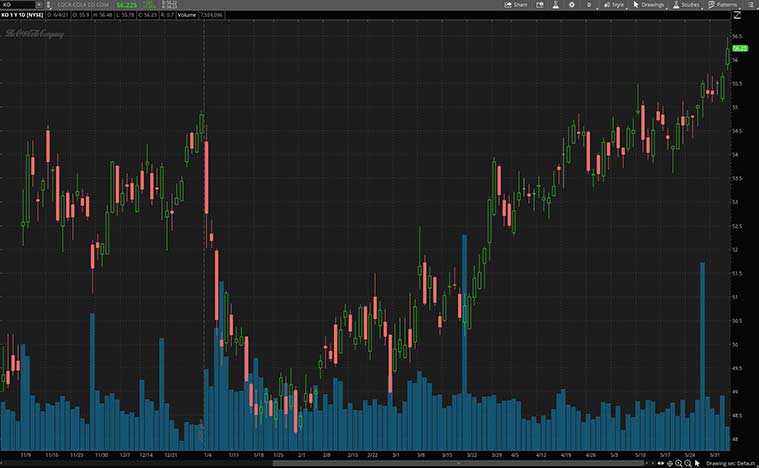 If anything, Coca-Cola does not seem to be running dry on new ideas anytime soon. Despite serving an estimated 1.9 billion drinks globally every day, Coca-Cola is now entering the hard seltzer market. This is apparent with the recent launch of its Topo Chico Hard Seltzer brand, marking its first move in the alcoholic beverage industry. With the current cocktails-in-a-can craze, Coca-Cola could be making a strategic play here. Notably, Bank of America Securities (NYSE: BAC) currently estimates that the drink category could reach $4 billion in revenue over the next few years. If that wasn’t enough, the company is also reportedly investing in the sports performance beverage market with Gatorade-competitor Bodyarmor.

While the company caters its offerings towards shifting consumer preferences, Coca-Cola continues to flourish financially. In its recent quarter fiscal posted last month, the company raked in total revenue of $9.02 billion. Aside from that, it also ended the quarter with a whopping $8.48 billion in cash on hand. With all this in mind, would KO stock be a top stock to watch now?

Next up, we will be looking at United Airlines Holdings Inc (UAL). For the uninitiated, the Illinois-based company is one of the most prominent airline operators in the U.S. now. By extension, this would firmly position UAL to make the most of the post-pandemic tourism boom. For one thing, its global operations and massive aircraft fleet would be major factors to consider here. Even now, with more consumers getting vaccinated across the nation, domestic air travel would be on the rise. Namely, UAL announced last week that airline ticket fares have returned to 2019 levels. As we approach the tail-end of the pandemic, investors appear to be eyeing UAL stock, given its year-to-date gains of over 35%. 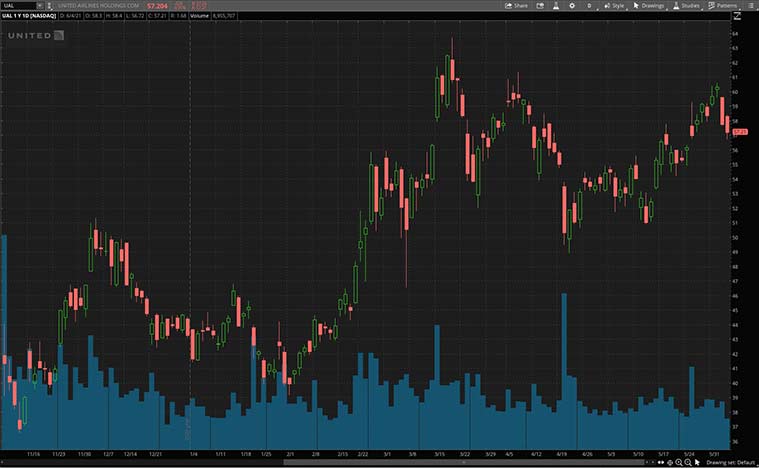 On the operational front, UAL appears to be kicking into high gear as well. As of yesterday, the company is now in a commercial agreement with Boom Supersonic, a Denver-based aircraft manufacturing company. Said agreement will be to add 15 of Boom Supersonic’s Overture aircraft to its current fleet. According to UAL, these aircraft could half travel times on certain routes and rely completely on sustainable aviation fuel. Now, should Overture meet UAL’s safety requirements, there is also mention of an option for an additional 35 aircraft down the line.

By and large, UAL would be significantly lowering travel times for consumers in a sustainable way. CEO Scott Kirby had this to say, “Boom’s vision for the future of commercial aviation, combined with the industry’s most robust route network in the world, will give business and leisure travelers access to a stellar flight experience.” Having read all this, would you consider investing in UAL stock?

When it comes to consumer discretionary companies, few can compare to the likes of e-commerce titan, Amazon. This is not only the case in the retail space but also in the cloud computing space as well. Impressively, the company’s Amazon Web Services (AWS) cloud computing arm is now an industry leader, boating revenue of $13.5 billion. Not to mention, Amazon also continues to make waves on the consumer-front through its streaming service Amazon Prime Video. With strong roots in the consumer and tech industries, could AMZN stock be worth jumping on now? 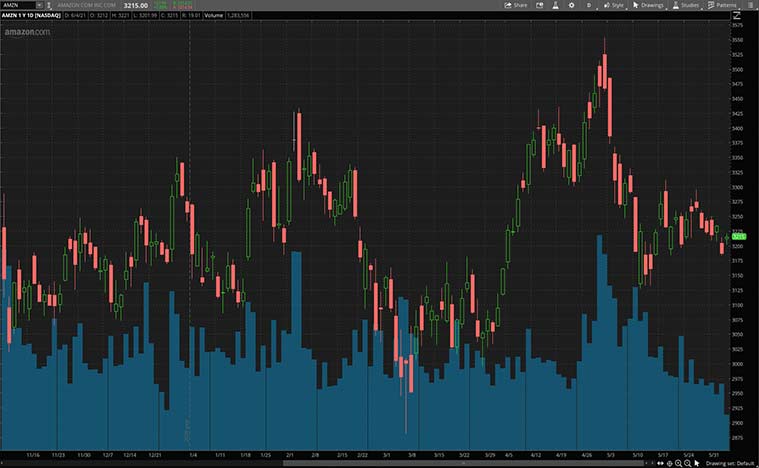 Well, if any company knows about consumer trends, it is Amazon. With consumers eager to spend their current funds, Amazon announced that it will be holding Prime Day on June 21. Indeed, the annual Amazon shopping fiesta is coming back strong in 2021 after being pushed forward last year. With countless deals on electronic gadgets of all kinds, consumers would have a field day on Amazon’s e-commerce platform. According to Amazon, Prime Day will feature millions of deals from top brands as well as small and medium businesses.

That’s not all, the company will also be hosting a star-studded music streaming event to promote Prime Day. It will feature popular artists such as Billie Eilish and Kid Cudi. When you pair all this with Amazon’s recent $8.45 billion acquisition of MGM studios, would you say AMZN stock is a top consumer stock to buy now?