By: StockMarket.com
Do You Have These Top Health Care Stocks On Your June 2021 Watchlist?

Given the current state of the stock market now, investors may be turning their attention towards health care stocks. For the most part, this could be because of inflation fears quelling the current momentum in hot reopening stocks now. After all, most companies in the reopening trade rely heavily on consumers spending their discretionary funds. According to Morgan Stanley (NYSE: MS) Chief U.S. Economist, Ellen Zentner, the current rise in consumer prices will likely persist in the near term as they return to pre-pandemic levels. While investors attempt to navigate these volatile times, health care stocks could become a safe haven for some.

Besides, the S&P 500 Health Care Sector Index has historically outperformed the broader market from May to October. According to CFRA Research head of ETF research, Todd Rosenbluth, now would be a great time to invest in health care. Rosenbluth argued, “health care stocks have held up during volatile times for the stock market, and we just recently hit the seasonal weak six months.” Now, investors appear to be watching the sector closely.

For instance, BriaCell Therapeutics (NASDAQ: BCTX) more than doubled in value at today’s opening bell. This is because of its latest breakthrough in its advanced breast cancer treatment, which reportedly boasts an extra one-year average overall survival benefit. Elsewhere, Morgan Stanley analyst David Risinger assumed coverage for health care giant Johnson & Johnson (NYSE: JNJ). The analyst hit JNJ stock with an Overweight rating last week citing the company’s diverse portfolio making it cheap now. Having read all of this, you might be keen to add some top health care stocks to your watchlist. If you are, here are four to know in the stock market today.

Constellation Pharmaceuticals is a clinical-stage biopharmaceutical company that develops novel therapeutics. In detail, its therapeutics are used to selectively modulate gene expression to address serious unmet medical needs in patients with cancer. CNST stock currently trades at $33.74 as of 10:52 a.m. ET and has skyrocketed by over 66% on today’s opening bell. Investors seem to be responding to news the company reported today. 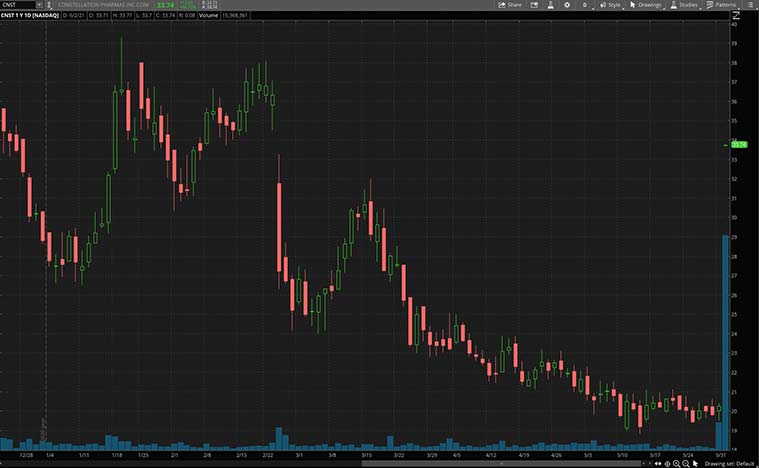 Diving in, the company reports that it has entered into a definitive agreement where MorphoSys will acquire Constellation for $34.00 per share in cash, which represents a total equity value of $1.7 billion. Constellation’s two lead product candidates are pelabresib and CPI-0209, a second-generation EZH2 inhibitor.

Furthermore, they are both in mid-to-late-stage clinical trials and have broad therapeutic potential to offer meaningful benefits to patients with various hematological and solid tumors. Through this acquisition, it will bolster the combined entity’s position in the hematology-oncology field. Given the excitement surrounding the company, will you be watching CNST stock?

Scynexis is a biotech company that is committed to treating life-threatening infections. Specifically, It is pioneering innovative medicines to help millions of patients worldwide overcome infections that are becoming increasingly drug-resistant. Its lead candidate is iberaxafungerp, is a broad-spectrum IV/oral antifungal agent representing a novel therapeutic class. 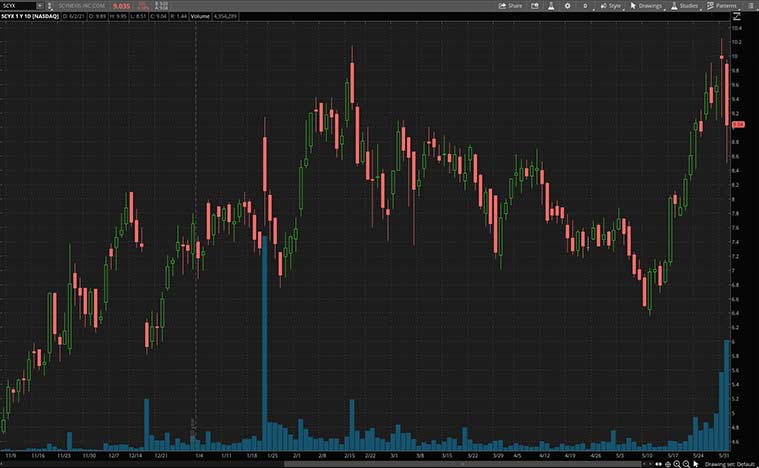 Today, the company released an exciting piece of news that may have gotten investor’s attention. It announced that the U.S. Food and Drug Administration (FDA) has approved Brexafemme (ibrexafungerp tables) as the first and only oral non-azole treatment for vaginal yeast infections.

Impressively, it represents the first approved drug in a novel antifungal class in more than 20 years. Also, the company expects a U.S. commercial launch in the second half of 2021 in partnership with Amplity Health, marking the evolution of Scynexis to a commercial-stage antifungal company. Marco Taglietti, Chief Executive Officer of Scynexis had this to say, “We believe ibrexafungerp has significant commercial potential. This first approval in the U.S. is a major step towards building the ibrexafungerp antifungal franchise as we intend to leverage an extended 10-year period of regulatory exclusivity and 14 years of patent protection.” For these reasons, will you add SCYX stock to your portfolio?

Next on this list of health care stocks is Moderna. In brief, the company has been one of the most successful health care companies in 2020 after being one of the first in the world to create the coronavirus vaccine. Its messenger RNA (mRNA) therapeutics have seen huge success in creating a vaccine at breakthrough speeds. It is currently investigating the potential use of its mRNA vaccines in immune-oncology and rare diseases. MRNA stock is up over 4% during Wednesday morning’s trading session and currently trades at $193.21 as of 10:53 a.m. ET. Shares of MRNA stock has been up by over 200% in the last year. 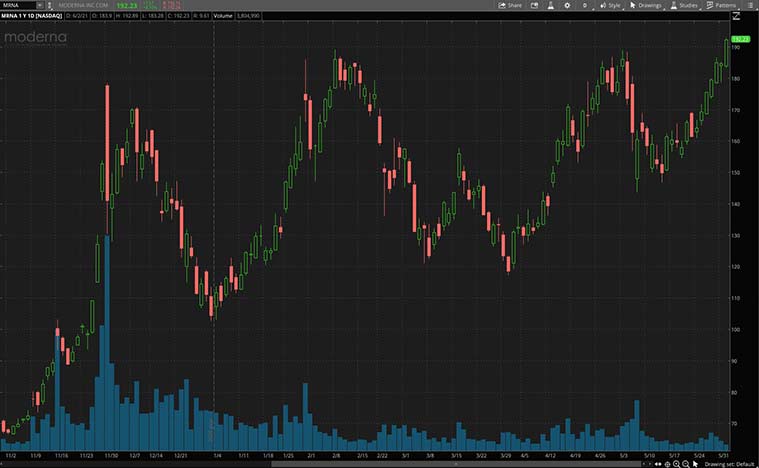 Today, the company announced a long-term agreement to supply its coronavirus vaccine on behalf of the COVAX Facility with UNICEF. Through this long-term agreement, UNICEF and its procurement partners including the Pan American Health Organization (PAHO) will have access to up to 34 million doses of Moderna’s vaccine to be delivered in the fourth quarter of 2021. It will also deliver up to 466 million doses in 2022. Given all of this, is MRNA a health care stock to consider watching?

Next up, we will be looking at clinical-stage biopharmaceutical company, AC Immune (ACIU). In brief, the company’s developmental pipeline primarily consists of precision medicine for neurodegenerative diseases. The likes of which include, Alzheimer’s disease, Parkinson’s, and NeuroOrphan indications. Notably, ACIU drives its current pipeline via its proprietary clinically validated tech platforms, SupraAntigen and Morphomer. 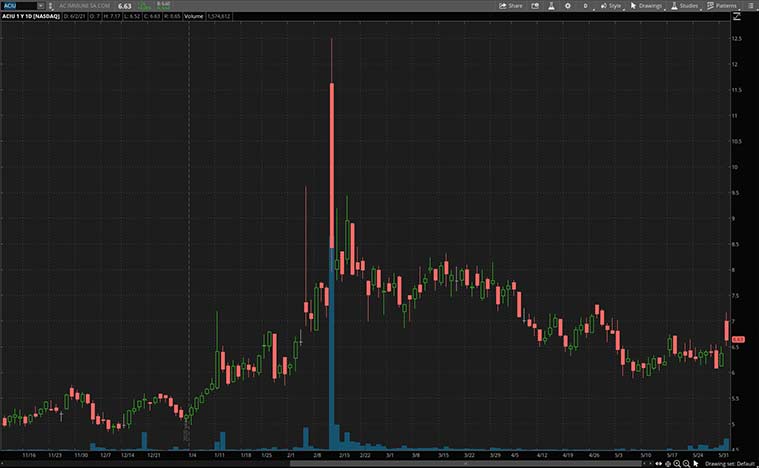 Now, ACIU is currently working on nine therapeutic and three diagnostic projects, six of which are undergoing clinical trials. Moreover, the company is currently working with healthcare titans such as Roche Group (OTCMKTS: RHHBY) and Eli Lilly (NYSE: LLY). Through its current partnerships, ACIU projects having more than $3 billion in potential milestone payments.

ACIU stock shot up by over 9% at today’s opening bell and currently trades at $6.65 as of 10:54 a.m. ET. If anything, investors appear to be reacting to the company’s latest update on its Alzheimer’s vaccine candidate, ACI-24. Earlier today, ACIU revealed that it will be completing its Phase 2 study of the drug in people with mild Alzheimer’s disease. Additionally, the company is advancing an optimized formulation of ACI-24, which showed enhanced and sustained immune responses in primates. Overall, CEO Andrea Pfeifer believes that these results “highlight the strength and versatility” of ACIU’s SupraAntigen platform against key proteins in neurodegenerative diseases. Would this make ACIU stock a top health care stock to watch for you?