One of the hottest topics of discussion in the stock market today is “the reopening trade,” and penny stocks have become a large part of that. Believe it or not, some of the most popular names right now were the hardest hit by the 2020 pandemic.

But, as analysts like Tom Lee of Fundstrat have discussed, these “epicenter stocks” could be the ones to see the most aggressive recoveries in light of vaccine distribution and lower case numbers.

Needless to say, here we are in June of 2021, and both things have happened. Vaccines are being distributed globally, while case numbers in many countries are on the decline. With the economy starting to reopen, these epicenter stocks are a big focus. Look at most stock watch lists, and you’ll likely see at least a few related companies with exposure to this “reopening” trade.

What’s more, since the pandemic selling pressure hit these stocks so hard, many eventually become penny stocks for the first time in their history of being public. Look at names like Hertz (OTC: HTZGQ) and even GameStop (NYSE: GME). Both of these stocks were trading below $5 last year. While GameStop stock has become somewhat of an outlier thanks to a Reddit boost, Hertz has only just begun climbing out of the depth of the penny stock range.

In this light, it’s worth searching for more reopening opportunities right now. At the end of the day, just because something is deemed a penny stock doesn’t mean it should be avoided entirely. In fact, if you look at some of the top-performing names over the last year, many have recorded epic windfalls in a relatively short period of time.

With this in mind, let’s take a look at a few other trending penny stocks that fall into this reopening category. Will they be the best to buy right now or avoided entirely? That’s something I’ll leave up to you to decide.

Ambev has long held a position on our penny stocks watch list. The Brazilian brewer and Latin American arm of ABInBev (NYSE: BUD) has gone through its ups and downs over the last year.

However, following the release of its latest earnings results, momentum has really begun growing in ABEV stock. In fact, since the financials were released on May 6th, shares of ABEV stock have climbed nearly 90%. Thanks to a Q1 revenue increase of over 27% and an EPS jump of nearly 140%, traders have begun following Ambev more closely.

Thanks to more strength in Brazilian markets, shares have continued climbing. Brazil’s Ibovespa reached an all-time high on June 1st. This further extended gains for a fifth straight day thanks to optimism from the global economic recovery. In addition, upbeat domestic data help boost this bullish sentiment event more. The Brazilian economy grew by 1.2% in the first quarter of 2021 compared to its fourth quarter of 2020. It also increased by 1% compared to the same period last year, above market expectations. This, in effect, saw it returning to pre-pandemic size in 2019. 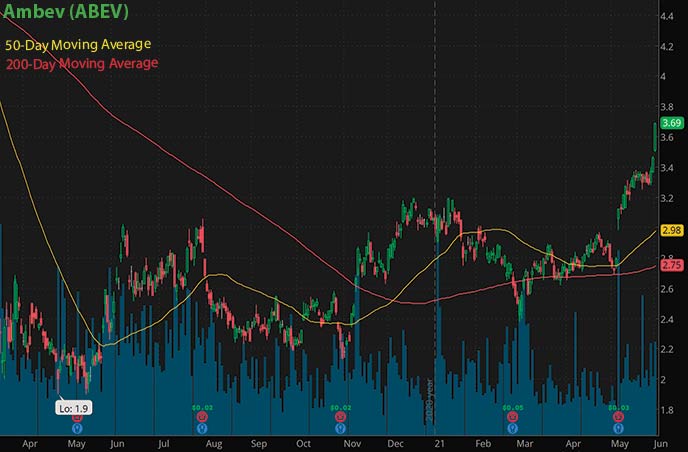 Alcohol isn’t the only thing that has gotten a boost from this reopening trade. Retail is also a big focus. Believe it or not, luxury items remain a draw for consumers. According to Forbes, Consultancy firm Bain & Company believes there’s a 30% probability that the luxury market “could meet or exceed $340 billion in sales of high-end items such as apparel, handbags, and jewelry.” This would be the most in 2 years. You’ve also got comparable luxury goods sellers like LVMH Moet Hennessy saying it has returned to growth with organic growth of 30% year on year.

But large luxury retailers aren’t the only ones experiencing growth right now. Birks Group is another company that has seen a boost of bullishness recently. Though it’s down from its 2021 high of $5.43, year-to-date, shares are up more than 270%. The company designs fine jewelry, timepieces, and luxury gifts in stores across Canada. 26 of its 29 stores operate under the Maison Birks brand and other retail locations under the Graff, Brinkhaus, Patek Philippe brands. The company also has a placement at U.S. retailers, including Mayors Jewellers, and most recently, Saks Fifth Avenue.

Last month the company announced that Bijoux Birks partnered with American Ballerina & Actress Kylie Jefferson. This collaboration launched as Bijoux increased its brand presence in the U.S. via 12 Saks Fifth Avenue locations. With a rise in luxury spending as the economy seemingly roars back, companies like Birks and LVMH could be ones to watch. 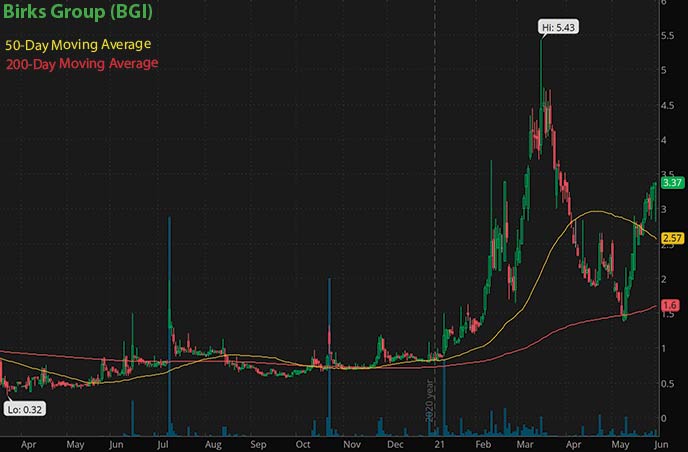 You can’t talk about reopening without mentioning entertainment & leisure companies. Drive Shack is another frequently discussed company. Following last year’s sell-off, DS stock has recovered considerably over the past 15 months. In March of 2020, the penny stock saw its share price hit lows of $0.86. Fast-forward to this year, and Drive Shack stock is trading well above $3.

Aside from excitement coming from reopening, the company has been executing several initiatives to position itself in 2021 competitively. In particular, restarting its gold-themed business has been key. Drive Shack operates several driving ranges that pair sports bar & golf together as one. In addition to this, Drive Shack has focused on expanding its offering, including the build-out of the company’s Puttery brand.

It’s the “newest competitive socializing and entertainment golf experience,” according to Drive Shack. Currently, there are 3 Puttery venues spanning cities in Texas, North Carolina, and Washington DC. In addition to this, it’s important to keep in mind that Drive Shack has already partnered with global golf superstar Rory McIlroy on its entertainment golf brand.

In a press release earlier this year, McIlroy expressed his excitement for this new opportunity. “Once Covid is under control, the ability to combine high-tech mini-golf with a high-quality food & beverage menu will make Puttery a great experience for any social gathering. I am personally making a financial investment in the growth of future Puttery venues across the country and can’t wait to debut our first Puttery in Dallas this summer.”

Giving that reopening is likely to include in-person options, Drive Shack and similar companies can be some to follow right now. 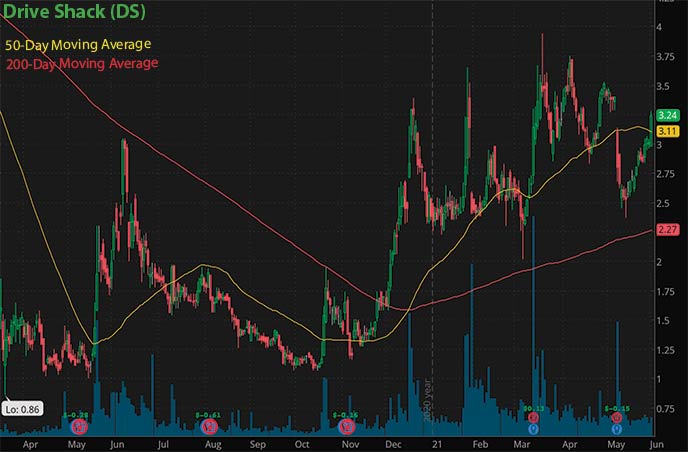 Travel stocks may be more obvious when it comes to reopening. Trivago is most famously known for its catchphrase, “Hotel, Trivago.” The hotel booking site has come into focus as travelers begin coming back to the market. Over the holiday weekend, more than 1.65 million people were screened at airports across the US.

That’s according to the Transportation Security Administration. Putting this into perspective, this is a 368% increase compared to 2020 figures. According to the American Automobile Association, more than 37 million Americans were estimated to have traveled 50 miles or more from home between May 27 and May 31.

Travel is starting to see an uptick; hotel accommodations and other travel perks are likely to become more of a focus. This week, the company announced its annual general meeting of shareholders. This will be held at the end of June. Aside from this, other interesting events outside of the reopening trade center on institutional investment into TRVG stock. Late last month, Rolf Schrömgens and PAR Investment Partners, L.P. reported stakes in the company. They came in at 16.3% and 29.8% respectively in the penny stock.

With continued optimism focused on reopening travel, trivago and other booking stocks could be on the watch list. 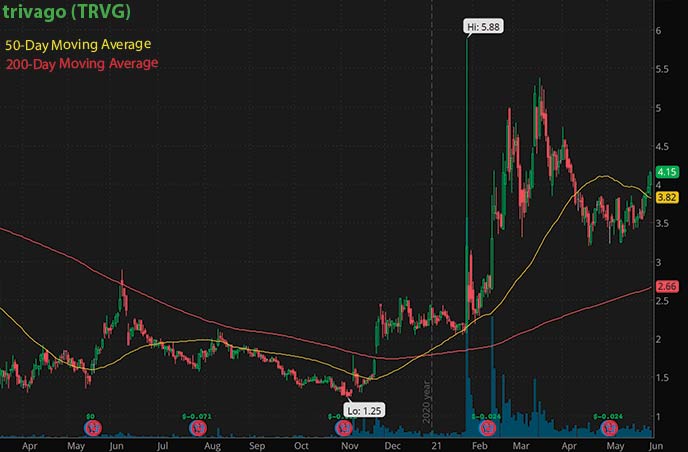 With virus cases decreasing, vaccine rates increasing, and a heightened sense of comfortability in social settings, reopening stocks could be some of the hottest to watch. Everything from travel and entertainment to retail and even energy are in the spotlight right now. So if you’re looking for reopening stocks to add to your penny stocks list, some of these names are trending at the start of June.