Robinhood investors are always on the lookout for cheap stocks to buy in the stock market today. Just in case you’re not familiar, Robinhood is an online investing app that offers commission-free trades and gifts free stocks to new members. If you’re an active trader in the cryptocurrency space, this marketing strategy is not something uncommon to you. And it is perhaps due to this reason that Robinhood has gained approximately 3 million new users in the past year.

While Robinhood users have a reputation for backing hyper-growth stocks and popular short squeezes such as GameStop (NYSE: GME), investors do actually hold a wide array of diversified stocks. Some of the popular names on the list may be aggressive names, and they’re certainly not for the faint of heart. Of course, you may have scored big with some of the best Robinhood stocks in the stock market. However, just because a stock has delivered massive returns in the past doesn’t mean that it will continue to do so in the future. If you are not sure what is the cheapest Robinhood stock to buy, could any of the following fit the bill?

Tilray and Aphria have formally merged to form a new company. And now we have a new marijuana industry giant that’s bigger than Canopy Growth (NASDAQ: CGC). Now that the blockbuster merger has completed, investors may be wondering what the next steps are for the company. Tilray currently has a big presence in multiple countries, paving the way for the company to generate more growth moving forward. 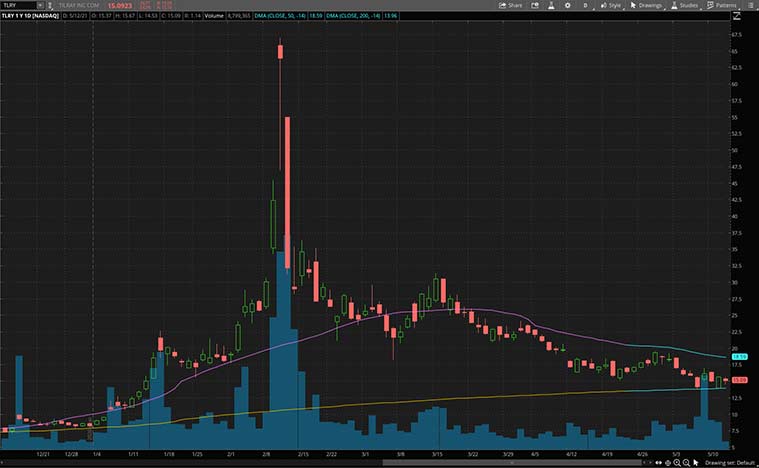 Apart from the North American market, the new combined entity will maintain and enhance its global position as a major player in the European market. It’s also worth mentioning that the company recently received licenses in the United Kingdom and Portugal to import and distribute medical cannabis products there. Of course, the key catalyst that would drive TLRY stock will be federal legalization in the US. Given the exciting developments surrounding the company, will you consider adding TLRY stock to your portfolio?

Nio is a pioneer in China’s premium electric vehicle market. It designs and sells premium electric vehicles, utilizing next-generation technologies in connectivity, autonomous driving, and artificial intelligence. The company differentiates itself through its continuous technological breakthroughs such as its industry-leading battery swapping tech, Battery-as-a-Service. The company also reported delivering 7,102 vehicles in April, representing a 125% increase over the year-ago period. What’s impressive is that the company was able to post strong growth despite the global chip shortages. 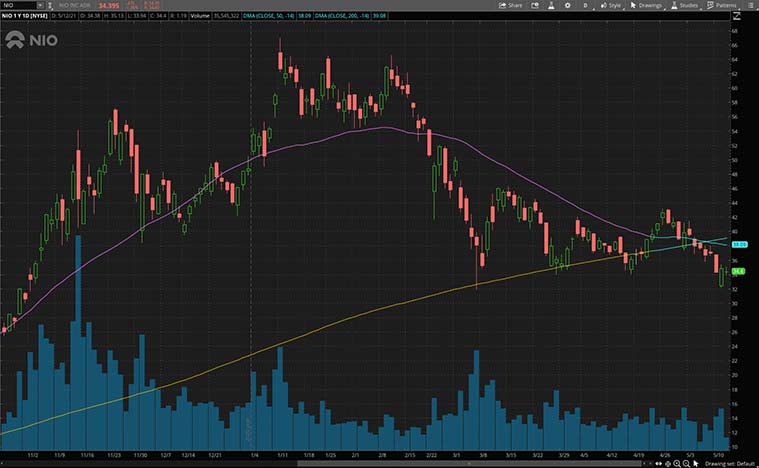 If anything, the delivery report signals that the company continues to enjoy high demand for its premium vehicles. Late last month, the company also reported its first-quarter financial results. In detail, vehicle sales were $1.13 billion for the quarter, a 489.8% increase year-over-year and a 20% increase sequentially. Delivery of vehicles was 20,060 for the quarter, representing a 422.7% increase year-over-year. All things considered, will you buy NIO stock?

After Gamestop, Zynga is probably the most held gaming stock among Robinhood investors. Zynga is a company specializing in developing social video games on mobile and social networking platforms. With consumers having more funds to spend on their entertainment needs, the company could see a surge in in-game spending. Earlier this month, Zynga announced the acquisition of Chartboost, a mobile programmatic advertising and monetization platform. With this deal, Zynga will possess full-stack advertising technology that it can apply across its game portfolio. 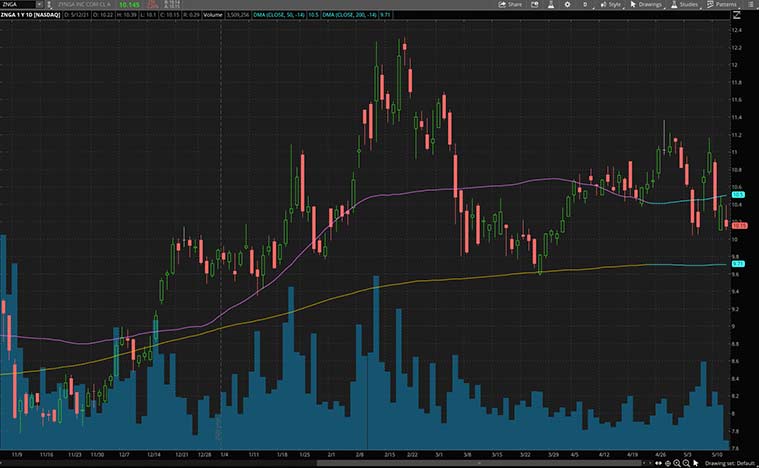 From its first-quarter earnings, revenue came in 68% higher year-over-year to $680 million. Following a strong top-line growth, Zynga went on to raise its full-year 2021 guidance for revenue to $2.7 billion, representing a growth of 37% year-over-year. Some may say that there is an interesting dichotomy in Zynga right now. On one end it is making smart moves, capitalizing on gaming trends in creating future values in the company. On the other end, its considerable debt may deter some investors from diving right in. Given the choice, would you place your bet on ZNGA stock, or fold?

[Read More] Arrival Vs Lucid Motors: Which Of These Electric Vehicle Stocks Is A Better Buy?

Microsoft is a tech company that develops, licenses, and supports a range of software products, services, and devices. Fundamentally, Microsoft is a solidly profitable business with a strong portfolio of products and services. Not to mention it’s Office 365 is indispensable, both as a gig economy tool and for any professional endeavor. 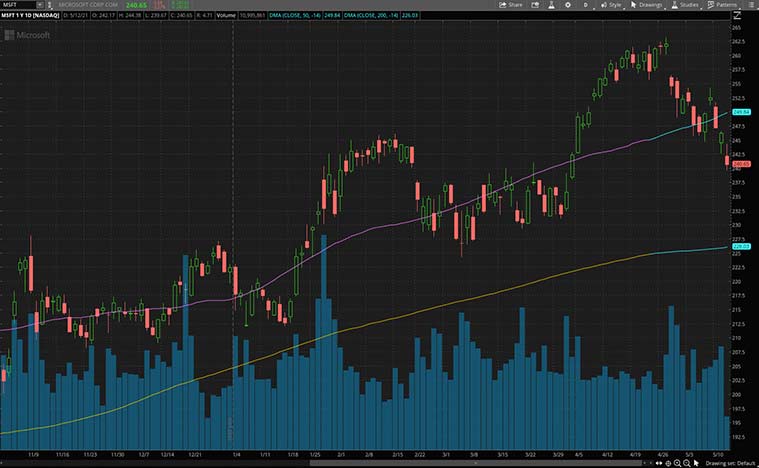 The recent acquisition of Nuance Communications (NASDAQ: NUAN) for $16 billion dollars will expand Microsoft’s healthcare vertical. By augmenting the Microsoft Cloud for Healthcare with Nuance’s solutions, the company will be able to empower healthcare providers through its clinical intelligence and other Microsoft cloud services. Certainly, such an acquisition is yet another sign of Microsoft putting its deep pockets to good use. With all these in mind, MSFT stock could be a good addition to your portfolio following the recent dip.

One of the more popular names in Robinhood also includes Walt Disney. Perhaps, it could be the strong uptick in vaccination rate in the U.S. that led many Robinhood investors to jump onto the magic train. Or simply, it could be just because of the COVID-19 cases gradually declining. For these reasons, investors are increasingly optimistic with DIS stock as the theme parks may reopen sooner than expected. Granted, Disney is starting to relax some of the restrictions in place since reopening its Florida park last July. With the summer holiday just one month away, we could see an increase in traffic in its theme park. And that should bode well for DIS stock. 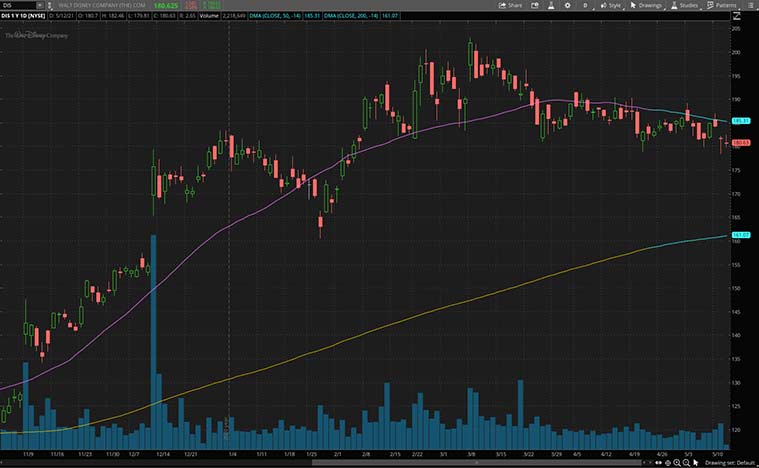 It is no longer a secret that the entertainment powerhouse shifted its focus to its streaming platform, Disney+. Its ability to boast a total global subscriber count of 100 million subscribers is something worth cheering on. Management expects it to boast 230 million to 260 million subscribers by 2024. Given that theme parks, experiences, and product segments are one step closer to delivering the levels of revenue it did in the past, would you consider DIS stock a top Robinhood stock to buy now?