Microsoft And Apple: Buy on the Dip?

By: StockNews.com
Microsoft (MSFT) and Apple (AAPL) are two of the largest companies in the world with a combined market cap of over $4 trillion. Both offer long-term growth prospects, but are trading at high multiples. Should you buy on the dip? Read more to find out.

Bill Gates founded Microsoft (MSFT) and Steve Jobs Apple (AAPL). Bill Gates is now involved in his foundation and other pursuits leaving the company in the capable hands of CEO Satya Nadella. Tim Cook, Job’s handpicked successor, took over at Apple after his untimely death.

Microsoft and Apple are two of the most successful companies in the US and worldwide. They share a combined market cap of over $4 trillion, with APPL a couple of hundred billion ahead of MSFT.

Gates and Jobs created the two most successful companies in history. When it comes to growth in the technology sector, there have been few investment choices better than MSFT and AAPL.

Picking between the two at the current valuations is no easy task. Analysts continue to debate which company will outperform the other. I view any such controversy as a waste of time as both have unique franchises that will continue to power the shares and market caps higher over the coming years.

Analysts love to hear the sounds of their voices. Forget the debate as both MSFT and APPL offer value on any dip as their market caps are likely heading much higher in the inflationary environment. A trillion here a trillion there, the numbers reflect the decline in money’s value. Still, the companies’ stocks continue to keep pace with the economic condition that weighs on fiat currencies purchasing power.

MSFT and AAPL have established their markets by making products that have become essentials.

Two traders recently faced off on CNBC about the prospects for the top two S&P 500 stocks, MSFT and APPL. Gina Sanchez, the CEO of Chantico Global and chief market strategist at Lido Advisors, believes Microsoft is trading at a lower valuation and smaller premium than Apple. While JC O’Hara, chief market strategist at MKM Partners, agrees, he believes Apple will outperform Microsoft and follow MSFT rising to a new record high soon.

Microsoft recently did a deal to sell 120,000 augmented reality headsets to the US military for $21.9 billion over ten years. The system will allow soldiers to share information and decision-making, providing a safer and more effective operating environment. The contract was a homerun for MSFT, lifting its shares to new record heights.

Meanwhile, Apple is working on Smart-Home products to increase its suite of offerings.  The sheer size of the two companies and their respective cash hordes have put them in the crosshairs of regulators, politicians, and critics over anti-trust issues. Those factors will continue to trail AAPL and MSFT as their market caps grow.

In August 2018, APPL was the first company to reach a $1 trillion market cap. Less than two years later, it looks headed for a $3 trillion valuation. MSFT may not be far behind as it looks to blow through the $2 trillion level as a hot knife goes through butter.

Yogi Berra, the hall of fame Yankee catcher, manager, and armchair philosopher, once said, “The future ain’t what it used to be.” In 2021, a trillion dollars ain’t what it used to be. Trillion in US government stimulus, an over $2 trillion government infrastructure rebuilding program, US national debt approaching the $30 trillion level, and Fed liquidity in the form of quantitative easing at the $1.5 trillion level over the past year desensitize us to the one trillion number.

Consider this- a billion seconds amounts to a generation or thirty years. A trillion seconds is 30,000 years- longer than human civilization to put the amount into perspective.

The Fed may tell us that there is no inflation in the US economy, AAPL and MSFT’s market caps at a combined over $4 trillion is an incomprehensible level. Asset prices are inflated. When it comes to Apple and Microsoft, higher corporate taxes are not likely to impact the companies’ earnings. Their franchises and dominant position in markets will allow them to pass the higher tax bill along to consumers with higher product prices.

MSFT’s trend is bullish and makes a $19.7 billion acquisition

The trend is always your best friend in markets. The long-term path of least resistance for Microsoft shares remains highly bullish. 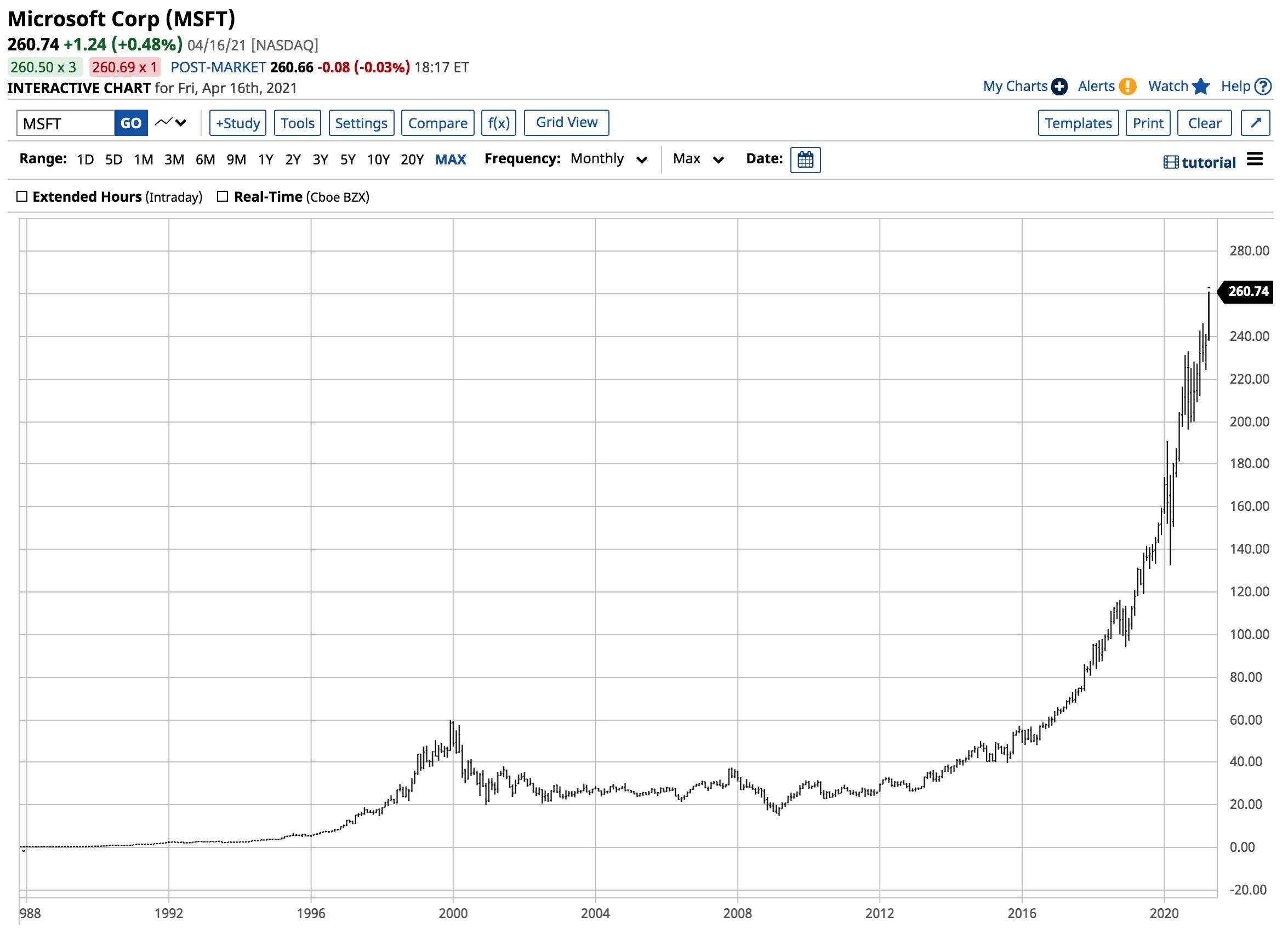 MSFT spent some of its cash hoard on Nuance Communications Inc. On April 12, MSFT announced its second-largest acquisition for the artificial intelligence company specializing in voice recognition and related software and services. The synergies come from Nuance’s cloud and AI software and services with a substantial focus on healthcare and enterprise customers.

Microsoft has invested in the healthcare space and recently announced its Microsoft Cloud for Healthcare bundle. Nuance and MSFT have been working together through a strategic partnership since 2019, smoothing the path for last week’s acquisition. MSFT’s largest purchase came in 2016 when the company acquired LinkedIn for $26.2 billion. The market blessed the deal as accretive as MSFT shares rose to a new record high on April 12, the announcement date.

Earnings and revenues support the bullish trend in MSFT shares. 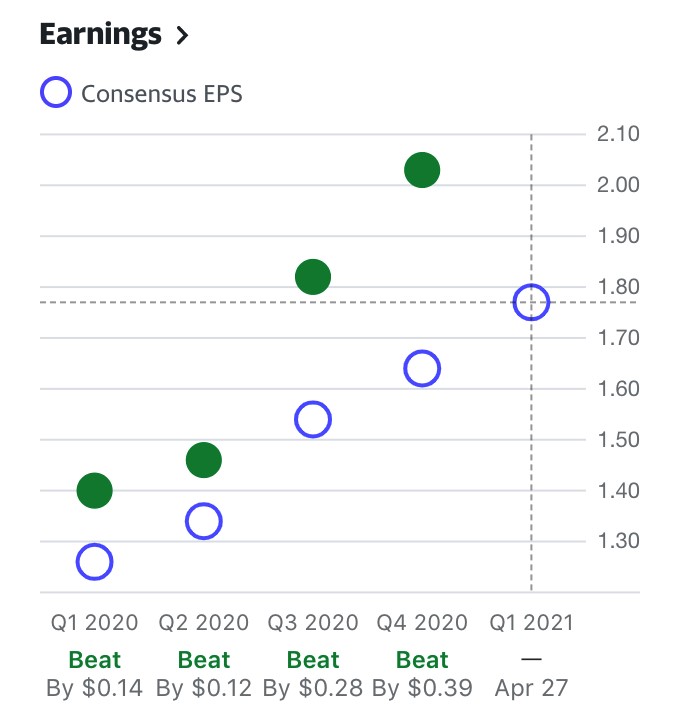 The chart shows that MSFT shares have beat analyst EPS forecasts over the past four consecutive quarters. Simultaneously, quarterly profits have moved progressively higher. The current forecast for Q1 2021 EPS is at $1.77. MSFT will report its first-quarter results on April 27. 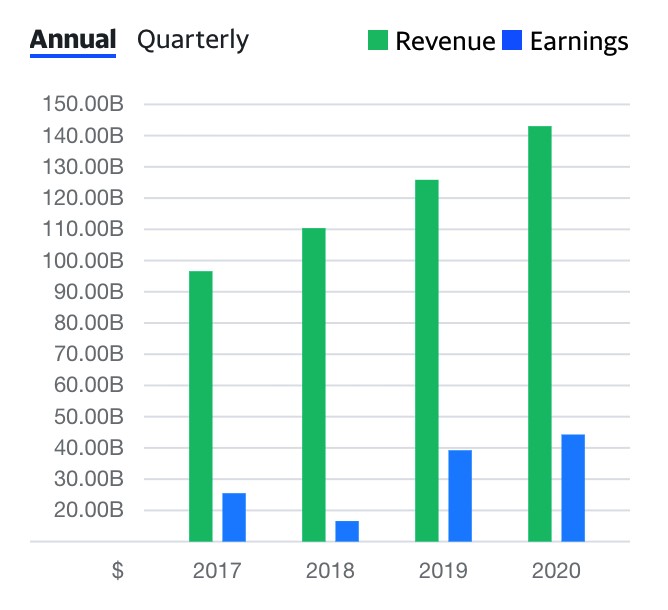 The revenue and earnings trends are impressive. A survey of thirty analysts on Yahoo Finance has a price target of $273.71 for MSFT shares with forecasts ranging from $180 to $313. A $3 trillion valuation is attainable for the company that continues to expand its market and suite of products.

AAPL is a bullish beast

Apple Inc opened in September 1984 at a split-adjusted 12 cents per share. $1000 invested in the company back then is worth roughly $1.094 million as of the end of last week at $134.16 per share, not accounting for any dividends. 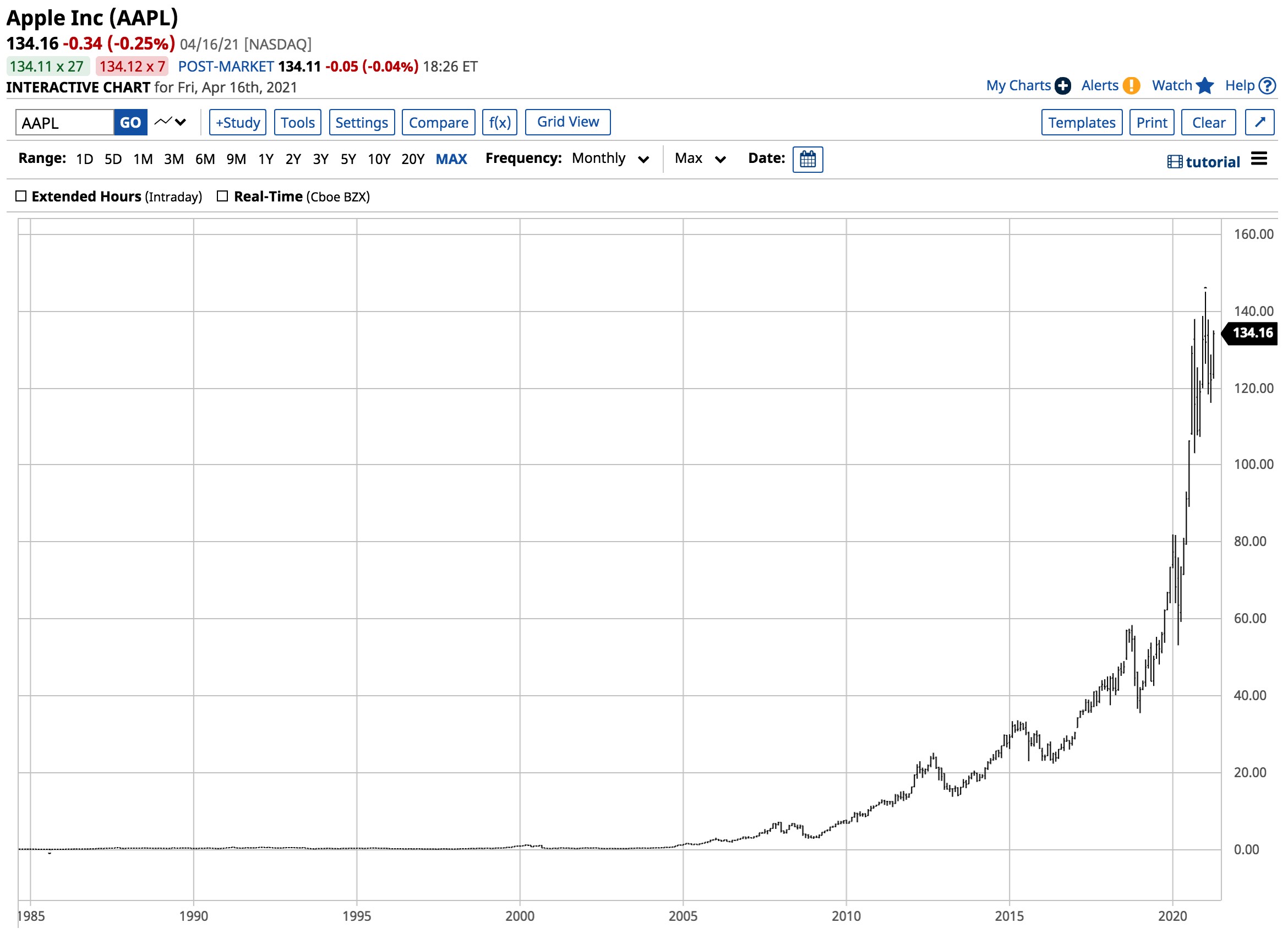 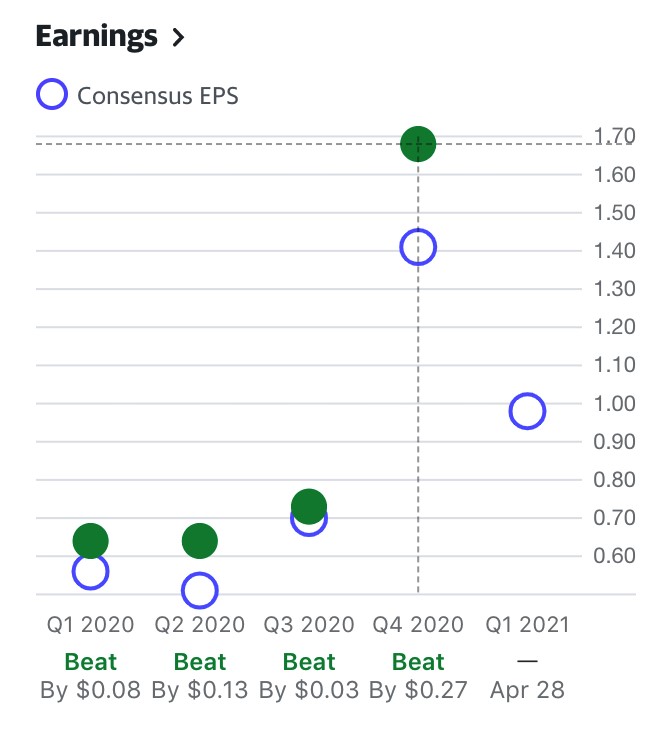 The chart illustrates that APPL has done an excellent job managing analyst expectations so that the company has beat expectations consistently over the past four quarters. AAPL will report Q1 earnings on April 28, with the market expecting EPS of 98 cents per share. The odds favor AAPL blowing away the target. 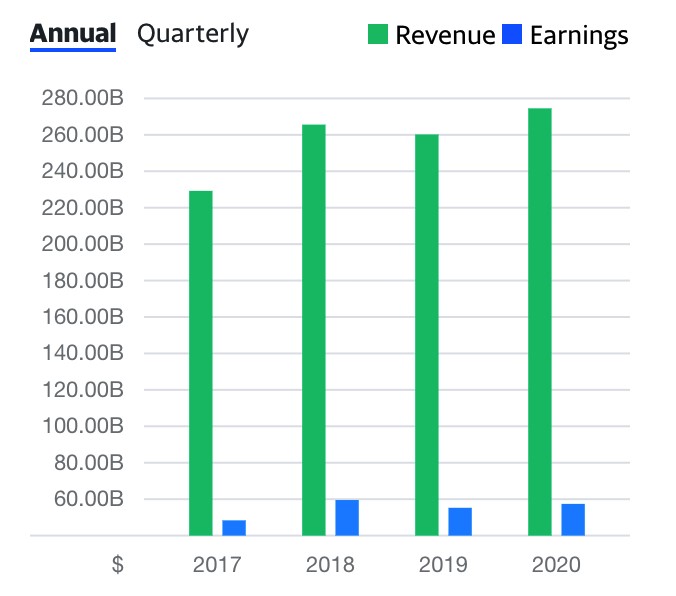 Revenues and earnings have been nothing short of incredible over the past years. A survey of thirty-nine analysts on Yahoo Finance has an average price target of $152.04 for the shares, with forecasts ranging from $83 to $175.

APPL will likely be the first company to reach the $3 trillion market cap level. However, MSFT will be hot on its heels. I would be an aggressive buyer of either company on any price weakness. It is hard to argue with decades of performance for the companies that lead the US and world with their products.

How to Ride the NEW Stock Bubble?

Unlock the POWR in Your Portfolio!

The post Microsoft And Apple: Buy on the Dip? appeared first on StockNews.com
Data & News supplied by www.cloudquote.io
Stock quotes supplied by Barchart
Quotes delayed at least 20 minutes.
By accessing this page, you agree to the following
Privacy Policy and Terms and Conditions.