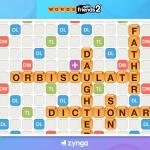 Today, Zynga Inc. (Nasdaq: ZNGA) a global leader in interactive entertainment, announced that it has officially added the word ‘orbisculate’ to the in-game dictionary of its hit mobile game, Words With Friends. Coined by scholar, language enthusiast and loving father Neil Krieger, Zynga’s popular word game has joined the Krieger family’s mission to gain the word’s entry into the official English language dictionary after Neil’s passing from COVID-19.

During his studies at Cornell University, Neil Krieger created the word ‘orbisculate’ as part of a school assignment. Meaning ‘to accidentally squirt juice and/or pulp into one's eye, as from a grapefruit, when eating,’ Neil’s word defined a universal experience, but also captured his unique creativity and humor. From its inception, Krieger used the word with such casual frequency that his children Hilary and Jonathan thought it was a regular word when they were growing up. It was only later that they discovered it could not be found in the dictionary.

After Neil Krieger became one of the more than 555,000 Americans to succumb to COVID-19, his children were eager to memorialize his well-lived life in a personal way that represented his personality. To honor their father’s life, Hilary and Jonathan are on a mission to popularize the word and secure its entry into the official English language dictionary. To help them reach their goal, Zynga recently made ‘orbisculate’ the Words With Friends ‘Word of the Day’ and has now officially entered their special word into the in-game dictionary. Players can now view the full etymology of the word on its ‘Definition’ page and are encouraged to visit www.orbisculate.com to sign the Kriegers’ petition and help support their efforts.

“The word ‘orbisculate’ is so whimsical, but the story behind it resonates with people. Making it the ‘Word of the Day’ in Words With Friends is a very personal tribute to our father, but also to all families who have been affected by COVID-19,” said Hilary Krieger. “Our dad would have gotten a huge kick out of his creation being played in Words With Friends. Being part of a game that’s played by millions will help add our father’s word to the vernacular, and ultimately, the English language dictionary,” added Jonathan Krieger.

“Over the past year, through initiatives like #PlayApartTogether, we’ve seen the gaming community come together again and again to support each other,” said Bernard Kim, President of Publishing at Zynga. “In getting to know the Kriegers through their campaign, we’ve been inspired by the spirit of this initiative and so admire the life and legacy of their father. Let’s help them achieve their goal.”

Launched in 2009, Words With Friends has grown from popular mobile game to global pop culture sensation. Since then, the game has expanded to new platforms like Facebook Messenger, launched a hit sequel with Words With Friends 2 and brought innovative new ways to play to people around the world. The game’s success through this decade-long journey has been powered by player connections made through quick and clever wordplay that has become a touchstone in fans’ lives.

Zynga is a global leader in interactive entertainment with a mission to connect the world through games. To date, more than one billion people have played Zynga’s franchises including CSR Racing™, Empires & Puzzles™, Merge Dragons!™ Merge Magic!™, Toon Blast™, Toy Blast™, Words With Friends™ and Zynga Poker™. Zynga’s games are available in more than 150 countries and are playable across social platforms and mobile devices worldwide. Founded in 2007, the company is headquartered in San Francisco with locations in the U.S., Canada, U.K., Ireland, India, Turkey and Finland. For more information, visit www.zynga.com or follow Zynga on Twitter, Instagram, Facebook or the Zynga blog.

Related Stocks:
Zynga Inc Cl A
Data & News supplied by www.cloudquote.io
Stock quotes supplied by Barchart
Quotes delayed at least 20 minutes.
By accessing this page, you agree to the following
Privacy Policy and Terms and Conditions.