By: StockNews.com
There's an increasing bipartisan consensus that regulation of platforms like Twitter (TWTR), Facebook (FB), and Google (GOOGL) has to be increased. However, the stocks may still be good investment opportunities.

The powerful CEOs, and in FB and TWTR’s cases, the founders, were called on the carpet in front of Congress in late March. While the shares of the technology leaders continue to trade in bullish long-term trends, the issues facing the companies could slow or stop the ascent as government regulations would likely weigh on their earnings ability. Increased oversight and regulations could come when corporate taxes rise, making for double-barrel trouble for shareholders.

A contentious session with the Congress on March 25

On March 25, 2021, the CEOs of Facebook (FB), Alphabet (GOOG), and Twitter (TWTR) appeared before members of the House Energy and Commerce Committee. Mark Zuckerberg, Sundar Pichai, and Jack Dorsey were grilled about their platform’s efforts to control and stem election fraud claims and skepticism over COVID-19 vaccines. Some of the non-transparent algorithms that create user engagement and promote misinformation came under scrutiny. The subcommittee’s Chairman admonished the social media CEOs, saying, “You can take the content down. You can reduce the vision. You can fix this. But you choose not to. You have the means. But time after time you are picking engagement and profit over the health and safety of users.”

Some of the committee members asked yes or no questions. When the CEOs attempted to qualify answers, the legislators had little patience.

The 2020 election and COVID-19 vaccine issues aside, the companies continue to face anti-competition, privacy, and a host of other criticisms from the US Congress and the European Union.

Mark Zuckerberg could be the poster boy for regulatory pushback

Mark Zuckerberg, Facebook’s founder, and CEO argued that Congress should narrow Section 230’s scope in his written remarks. He favors a form of conditional liability for social media websites where the online platforms could face lawsuits if they fail to adhere to best practices established by a third party. The problem with the argument is that it is self-serving as it could limit any competition because of costs. Section 230 protects the sites from litigation that publishers often face. It provides immunity for website platforms from third-party content. Mr. Zuckerberg is not popular in the halls of Congress these days. His wealth and power are the targets of many progressive Democrats.

Meanwhile, FB shares have been moving towards the all-time high. 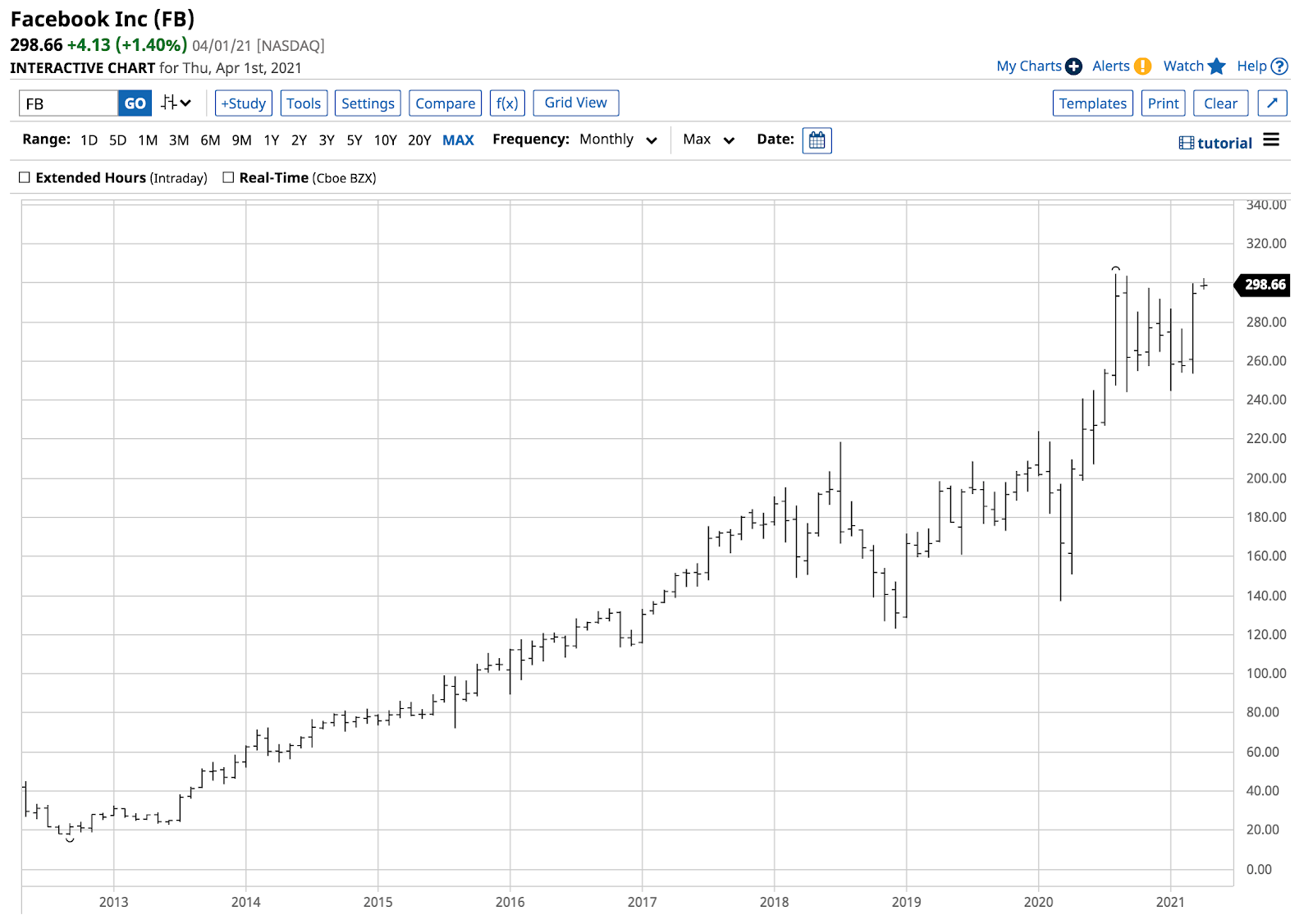 Meanwhile, Mr. Zuckerberg’s issues with Congress are far from over as the legislators look to put a leash on his company’s rising power. FB’s market cap stands at the $850.485 billion level.

Sundar Pichai faced the same line of questioning about Alphabet’s search engine. However, the underlying current of some members of Congress is the company’s relationship with China. Meanwhile, Republicans expressed concerns about politically motivated censorship, while Democrats charge that Google and other platforms allow sites that host misinformation without any repercussions. Pichai warned against any changes to Section 230 protections, saying that it could cause “unintended consequences.” He suggests a self-policing system where “Solutions might include developing content policies that are clear and accessible, notifying people when their content is removed and giving them ways to appeal content decisions, and sharing how systems designed for addressing harmful content are working overtime.” Google’s leadership position and financial strength have caused more than a few concerns on both sides of the political aisle. 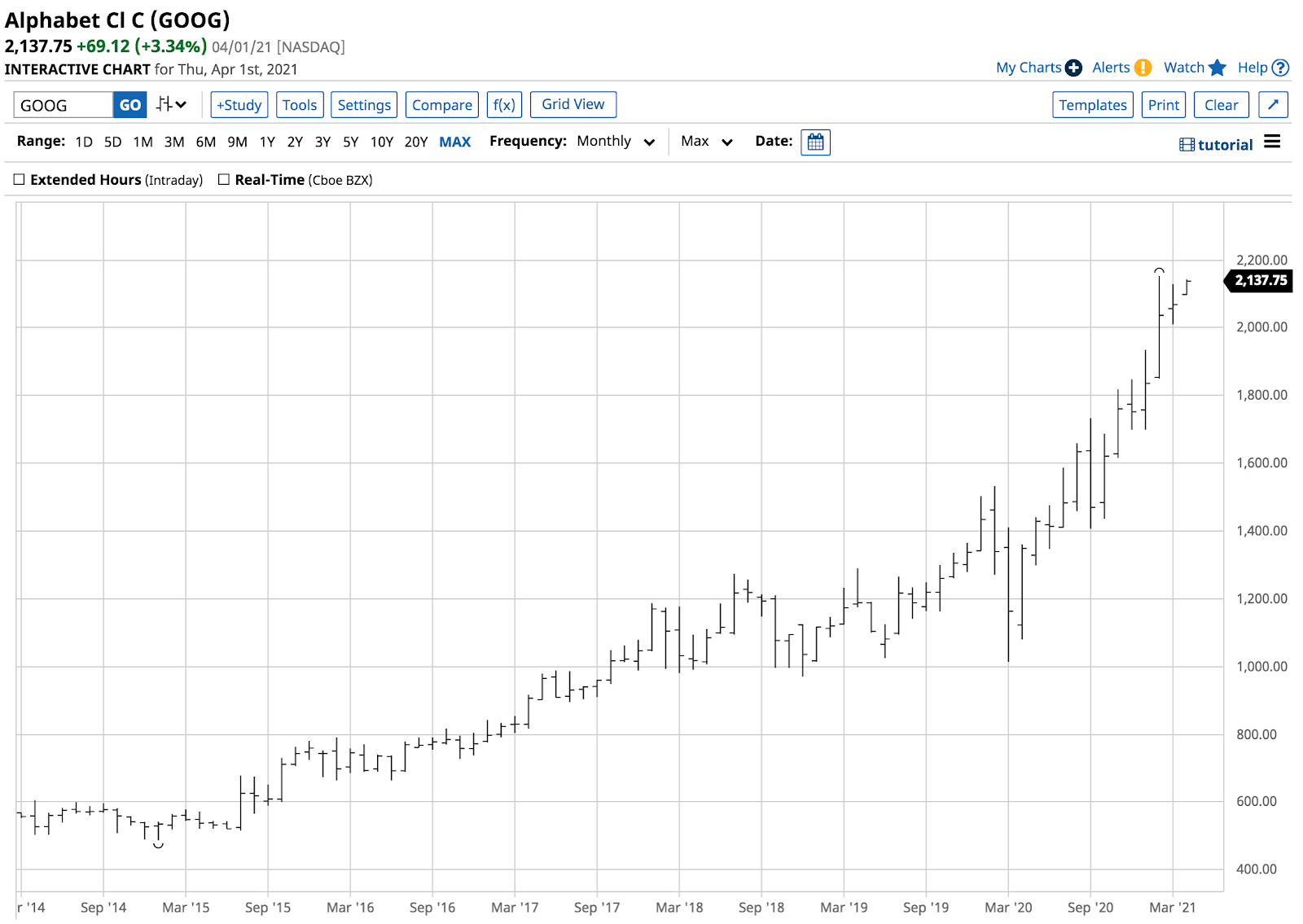 Jack Dorsey’s testimony was short and sweet, which likely made his attorneys happy. Twitter’s founder and CEO was the only one of the three to answer yes or no questions with a one-word answer. When the three executives were asked if they had any responsibility for the January 6 attack on the Capitol, Dorsey said, “Yes, but you also have to take into consideration the broader ecosystem. It’s not just about the technological systems that we use.” Mark Zuckerberg and Sundar Pichai did not answer yes or no.

Many committee members accused Mr. Dorsey and the other CEOs of being smug, evasive, and condescending. He retweeted criticism of lawmakers who disagreed with his ideas on substantive policy. Jack Dorsey was tweeting during his testimony in what some committee members saw as a disrespectful act. 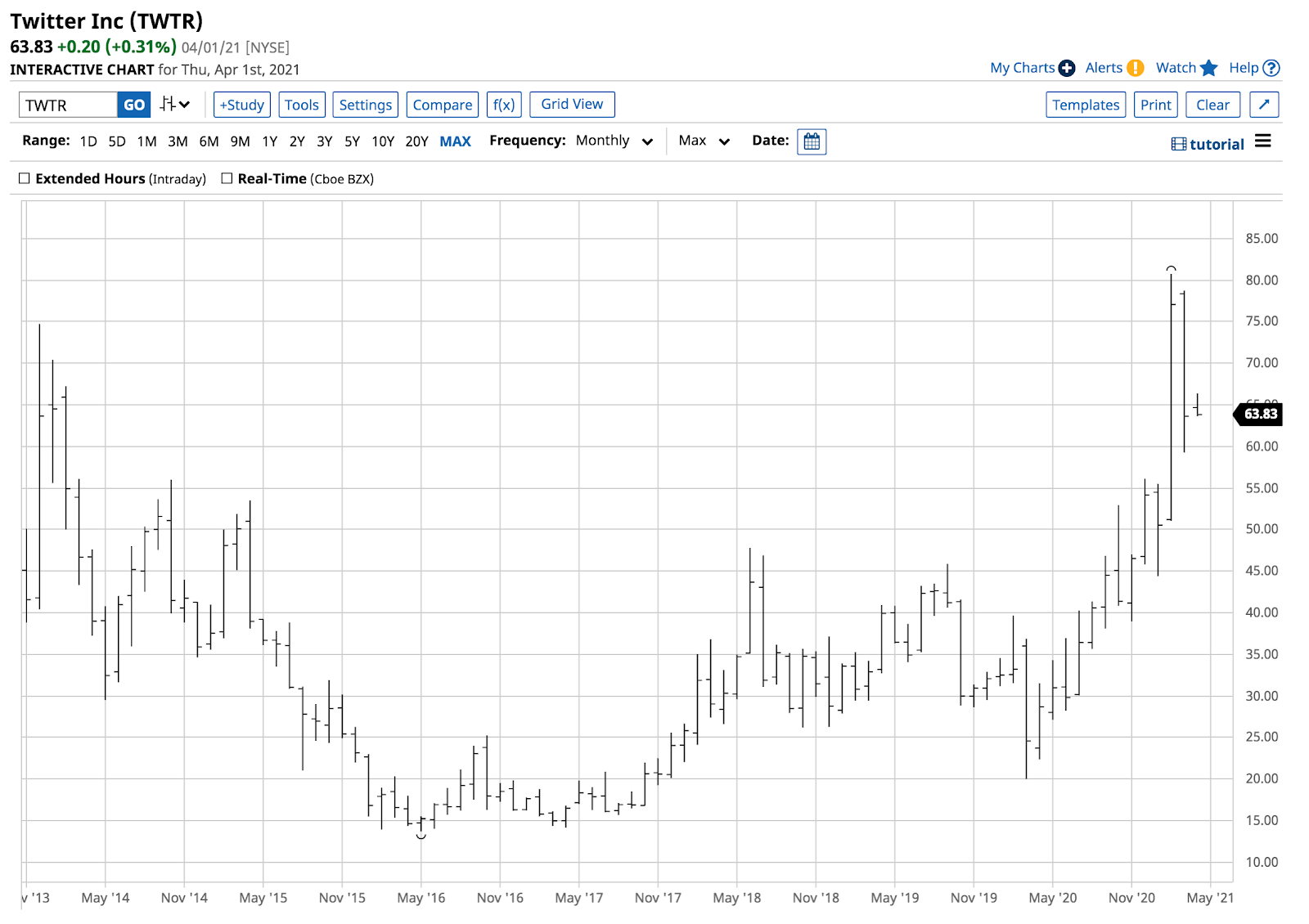 Perhaps the most telling comment that came out of the latest technology CEO grilling session was from the committee’s Chair, Frank Pallone, a Democrat from New Jersey. Congressman Pallone said, “the time for self-regulation is over. It is time we legislate to hold you accountable.” The committee’s top Republican, Congresswoman McMorris Rodgers, told the CEOs that their platforms are her “biggest fear as a parent.”

Regulation is on the horizon, and the tension between the tech sector and Congress will continue. The CEOs seem to view Congressional inquiry and new regulations as a working session to influence the legislators. They may find out that their vast personal wealth and their companies’ dominant positions that make competition virtually impossible is the most significant issue for many legislators. Moreover, there is bipartisan support to put a substantial regulatory leash on the companies. While Democrats and Republicans may have differing motivations, they agree that “self-regulation” and a system that protects the platforms is not working. Meanwhile, the CEOs attitudes and their “suggestions” for regulation are self-serving, which could make eventual legislation onerous.

Late last week, Senator Bernie Sanders traveled to Alabama to stand with Amazon’s (AMZN) workers protesting to unionize. Ahead of his visit, Sanders tweeted, “All I want to know is why the richest man in the world, Jeff Bezos, is spending millions trying to prevent workers from organizing a union so they can negotiate for better wages, benefits, and working conditions.” The leader of the Democrat’s progressive wing has said there should be no billionaires in the US.

Many legislators believe that the technology sector has become too powerful, too rich, and too condescending to lawmakers. The tech-heavy NASDAQ reached a high of 14,167.15 on February 16. 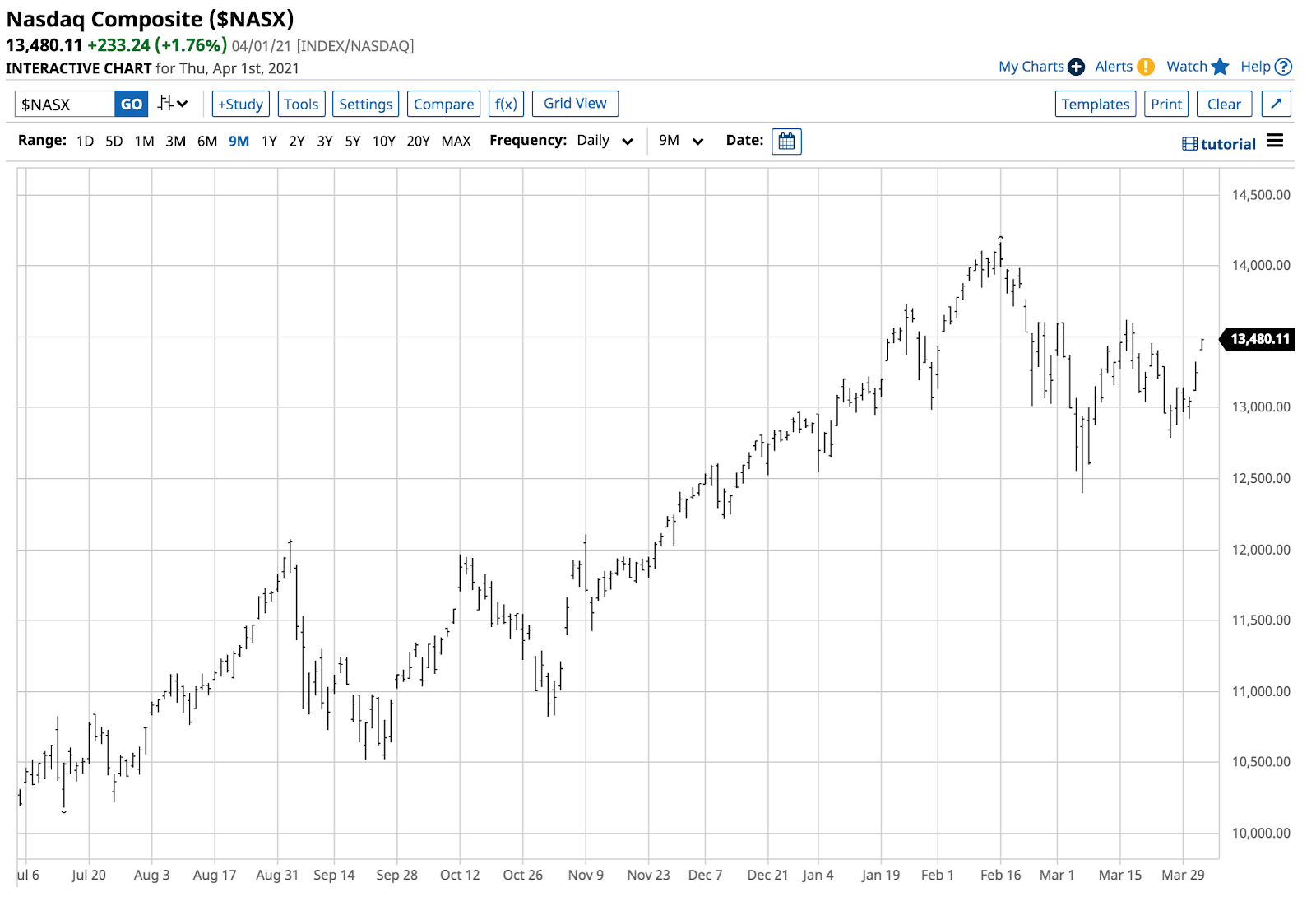 The index has made lower highs over the past six weeks. Meanwhile, the S&P 500, DJIA, and Russell 2000 have made new record highs in March with the S&P closing last week over the 4000 level for the first time. The NASDAQ is likely to reflect the growing support for regulations that weigh on earnings at the leading social media and technology companies. The NASDAQ led the way on the upside in 2020 as the pandemic caused profits to soar. 2021 could be the year where the government hands a massive bill and new rules to the world’s wealthiest companies, founders, and CEOs.

How to Ride the NEW Stock Bubble?

Unlock the POWR in Your Portfolio!