UIPath’s meteoric rise from unknown startup to $35B RPA juggernaut

By: TechCrunch
When TechCrunch covered UIPath’s Series A in 2017, it was a small startup out of Romania working in a little known area of enterprise software called robotic process automation (RPA). Then the company took off with increasingly large multi-billion dollar valuations. It progressed through its investment rounds, culminating with a $750 million round on an […]

When TechCrunch covered UIPath’s Series A in 2017, it was a small startup out of Romania working in a little known area of enterprise software called robotic process automation (RPA).

Then the company took off with increasingly large multi-billion dollar valuations. It progressed through its investment rounds, culminating with a $750 million round on an eye-popping $35 billion valuation last month.

This morning, the company took the next step on its rapid-fire evolutionary path when it filed its S-1 to go public. To illustrate just how fast the company’s rise has been, take a look at its funding history: 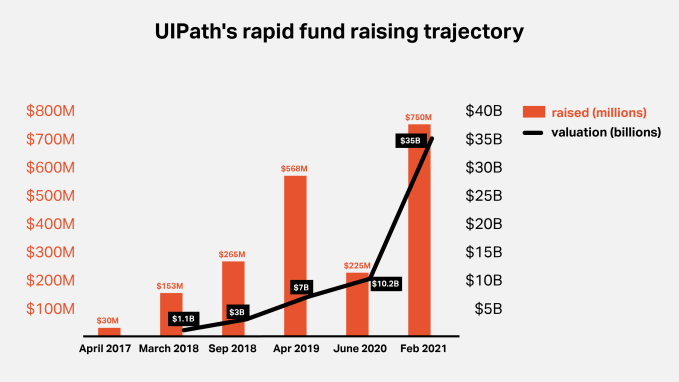 RPA is much better understood these days with larger enterprise software companies like SAP, Microsoft, IBM and ServiceNow getting involved. With RPA, companies can automate a mundane process like processing an insurance claim, moving work automatically, while bringing in humans only when absolutely necessary. For example, instead of having a person enter a number in a spreadsheet from an email, that can happen automatically.

In June 2019, Gartner reported that RPA was the fastest growing area in enterprise software, growing at over 60% per year, and attracting investors and larger enterprise software vendors to the space. While RPA’s growth has slowed as it matures, a September 2020 Gartner report found it expanding at a more modest 19.5% with total revenue expected to reach $2 billion in 2021. Gartner found that stand-alone RPA vendors UIPath, Blue Prism and Automation Anywhere are the market leaders.

Although the market feels rather small given the size of the company’s valuation, it’s still a nascent space. In its S-1 filing this morning, the company painted a rosy picture, projecting a $60 billion addressable market. While TAM estimates tend to trend large, UIPath points out that the number encompasses far more than pure RPA into what they call ‘Intelligent Process Automation.’ That could include not only RPA, but also process discovery, workflow, no code development and other forms of automation.

Indeed, as we wrote earlier today on the soaring process automation market, the company is probably going to need to expand into these other areas to really grow, especially now that it’s competing with much bigger companies for enterprise automation dollars.

While UIPath is in the midst of its quiet period, it came up for air this week to announce that it had bought Cloud Elements, a company that gives it access to API integration, an important component of automation in the enterprise. Daniel Dines, the company co-founder and CEO said the acquisition was about building a larger platform of automation tools.

“The acquisition of Cloud Elements is just one example of how we are building a flexible and scalable enterprise-ready platform that helps customers become fully automated enterprises,” he said in a statement.

While there is a lot of CEO speak in that statement, there is also an element of truth in that the company is looking at the larger automation story. It can use some of the cash from its prodigious fundraising to begin expanding on its original vision with smaller acquisitions that can fill in missing pieces in the product road map.

No code, workflow, and RPA line up for their automation moment