The raise brings Digital House’s total funding raised to more than $80 million since its 2016 inception. The Rise Fund led a $20 million Series B for Digital House in December 2017, marking the San Francisco-based firm’s investment in Latin America.

How nontechnical talent can break into deep tech

Nelson Duboscq, CEO and co-founder of Digital House, said that accelerating demand for tech talent in Latin America has fueled demand for the startup’s online courses. Since it first launched its classes in March 2016, the company has seen a 118% CAGR in revenues and a 145% CAGR in students. The 350-person company expects “and is on track” to be profitable this year, according to Duboscq. 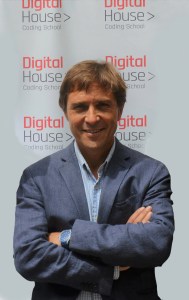 In 2020, 28,000 students across Latin America used its platform. The company projects that more than 43,000 will take courses via its platform in 2021. Fifty percent of its business comes out of Brazil, 30% from Argentina and the remaining 20% in the rest of Latin America.

Specifically, Digital House offers courses aimed at teaching “the most in-demand digital skills” to people who either want to work in the digital industry or for companies that need to train their employees on digital skills. Emphasizing practice, Digital House offers courses — that range from six months to two years — teaching skills such as web and mobile development, data analytics, user experience design, digital marketing and product development.

The courses are fully accessible online and combine live online classes led by in-house professors, with content delivered through Digital House’s platform via videos, quizzes and exercises “that can be consumed at any time.”

Digital House also links its graduates to company jobs, claiming an employability rate of over 95%.

Looking ahead, Digital House says it will use its new capital toward continuing to evolve its digital training platforms, as well as launching a two-year tech training program — dubbed the the “Certified Tech Developer” initiative — jointly designed with Mercado Libre and Globant. The program aims to train thousands of students through full-time two-year courses and connect them with tech companies globally.

Specifically, the company says it will also continue to expand its portfolio of careers beyond software development and include specialization in e-commerce, digital marketing, data science and cybersecurity. Digital House also plans to expand its partnerships with technology employers and companies in Brazil and the rest of Latin America. It also is planning some “strategic M&A,” according to Duboscq.

Francisco Alvarez-Demalde, co-founder & co-managing partner of Riverwood Capital, noted that his firm has observed an accelerating digitization of the economy across all sectors in Latin America, which naturally creates demand for tech-savvy talent. (Riverwood has an office in São Paulo).

For example, in addition to web developers, there’s been increased demand for data scientists, digital marketing and cybersecurity specialists.

“In Brazil alone, over 70,000 new IT professionals are needed each year and only about 45,000 are trained annually,” Alvarez-Demalde said. “As a result of such a talent crunch, salaries for IT professionals in the region increased 20% to 30% last year. In this context, Digital House has a large opportunity ahead of them and is positioned strategically as the gatekeeper of new digital talent in Latin America, preparing workers for the jobs of the future.”

André Chaves, senior VP of Strategy at Mercado Libre, said the company saw in Digital House a track record of “understanding closely” what Mercado Libre and other tech companies need.

“They move as fast as we do and adapt quickly to what the job market needs,” he said. “A very important asset for us is their presence and understanding of Latin America, its risks and entrepreneurial environment. Global players have succeeded for many years in our region. But things are shifting gradually, and local knowledge of risks and opportunities can make a great difference.”