Possibly the Most Valuable Pair of 1985 Michael Jordan Game Worn Rookie Shoes Estimated at Over $1,000,000 at Auction 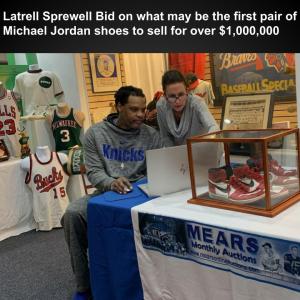 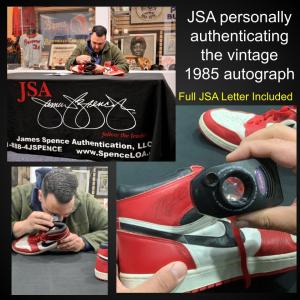 South Milwaukee, WI: Midwest auctioneer MEARS Online Auctions is currently accepting bids on what industry experts predict might be the most valuable pair of shoes ever offered. With current bidding at $400,000+, collectors and investors alike both realize this is a rare chance to purchase what may be considered the finest known pair of Michael Jordan shoes.

"Provenance, game wear, vintage autograph, overall aesthetics, these shoes have it all, " stated auction President/CEO Troy R Kinunen. "With an international race to purchase the finest sports collectables, now is the opportunity to own a world class pair of Michael Jordan shoes before pricing reaches the 8-figure mark," predicts Kinunen.

The sports memorabilia market has gained worldwide attention, with collectors, professional athletes, and institutional investment money vying to purchase world class collectables. “Top investors want the best of the best from the most iconic players,” said MEARS Auctions President / CEO Troy R. Kinunen. “I have never seen anything like this. It seems like more money has entered the hobby in the past 30 days that in the past 30 years combined.” To illustrate his point, Kinunen notes than in May of 2020, another pair of 1985 Michael Jordan Signed Game Worn Rookie Shoes sold for $560,000. By comparison, the coveted 1986 Fleer Michael Jordan rookie card sold for $96,000. This created a 5.8:1 ration of shoe to card value.

Current data shows there are 315 known 1986 Fleer Jordan rookie cards, and seven pairs of 1985 Michael Jordan rookie shoes have been evaluated by MEARS and used for comparison. “The numbers don’t lie. Past ratios have established Jordan rookie shoes selling at nearly a 6 times greater price than his rookie card. With such a small number of rookie shoes known compared to the 315 known rookie cards, the long-term value is certainly in the shoes.” exclaimed Kinunen.
The shoes were personally removed off Michael Jordan’s feet after a 1985 game where “Grandma”, a guest of Michael Jordan, received the autographed gift.
The player specific code, “TYPS” referring to the “TY” Tommy Yang factory and “PS” Player Sample, markings only found on Michael’s personal stock.
Bearing a vintage autograph, the professional staff of JSA (James Spence Autographs) authenticated the signature. MEARS authenticated the shoes for authenticity.

Latrell Sprewell, a Milwaukee native, heard about the sale of these historic shoes and asked for a private showing. The former NBA legend replied, “Check out this original pair of 1985 Michael Jordan Autographed Game Worn Air Jordan 1's. I placed the first bid on what might be the first $1,000,000 pair of shoes”.
Bidding is currently live and the shoes can be viewed at www.mearsonlineauctions.com . Questions may be directed to Troy R. Kinunen at (414)-828-9990 or email troy@mearsonline.com