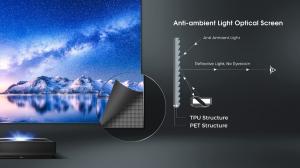 The image reproduced by a laser tv on the screen is reflective. 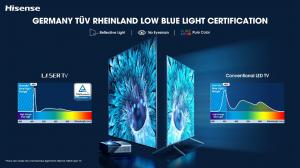 The viewers are out of the area of strong blue light with 0 blue light exposure when watching a laser TV. 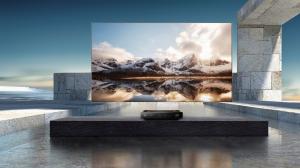 The latest Trichroma laser display can reproduce 90% of the colors visible to human eyes.

Large screen TV is a future trend. Hisense, a tech-driven brand, believes that laser TV is the ultimate display solution.

Large screen TV is a future trend. Hisense, a tech-driven brand, believes that laser TV is the ultimate display solution.

What is a laser TV?

Eye friendly:
The image on the screen is reflective instead of directly projected towards the eyes. Therefore, the viewers are out of the area of strong blue light with 0 blue light exposure which can avoid eyestrain.

Immersive Experience:
Human eyes can see an estimated 1 million colors. The latest TriChroma laser display can reproduce 90% of the colors visible to human eyes, while LED TV can only reach 60% of that range. Laser TV is the only display product that meets the BT2020 standard, the top standard for future TV color.

Sense of Presence:
Laser TV enables a closer watch of a huge screen (only 4 meters for a 100-inch laser TV), creating a true-to-life viewing experience. A consumer reviews, “even the news immerses me in the sense of being on the spot.”

Energy and Cost Saving:
Laser TV offers lower power consumption and higher cost performance than LED TV of the same size (e.g., the price of a 100-inch laser TV is 1/4 to 1/2 of that of a 100-inch LED TV), resulting in a dominance of laser TV in large screen TV market. Moreover, with a shorter and stabler industry chain, the cost in manufacture will be diluted with a growing volume, leading to more competitive prices.

Hisense 100L9
The world’s first RGB Laser TV. Harman Kardon liftable audio composed of Dolby Atmos changes your living room into a private home theater.
This product will be launched in North American and European markets in this August.

Hisense 88L5V
With more than 100,000 audio units built into the screen itself and sound from the screen directly, Hisense 88L5V Sonic Laser TV realizes the integration of sound and picture.
This product has been launched in the UK, Germany, France, Italy, Spain, Russia, South Africa, the UAE and East European markets in February and is ready for purchase.

Introducing the TriChroma Laser TV: Redefining the in-cinema experience is our new standard.