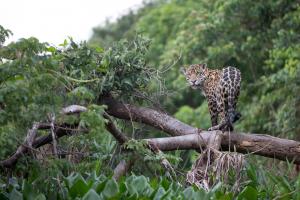 We are proud to announce our ambition to undertake large carbon offset projects. The projects provide high impact on our natural surroundings, while creating real value for our shareholders.”— CEO DuijvestijnHARDENBERG, OVERIJSSEL, THE NETHERLANDS, February 24, 2021 /EINPresswire.com/ -- DGB GROUP N.V. (Euronext: DGB, “DGB”) announced today that it is partnering with Quadriz B.V. (“Quadriz”), the trading and carbon project arm of forestry and agro-research group Investancia for Reducing Emissions from Deforestation and forest Degradation (“REDD+”) project development in the Chaco region in Paraguay.

As announced on 11 January 2021, DGB is working together with Quadriz to source large-scale native forestland plots in excess of 50.000 hectares as potential land acquisition targets for DGB. DGB and Quadriz have now agreed to partner on forest carbon offset projects to reduce emissions from avoiding planned deforestation and to protect critical primary forest financed through the generation of high-integrity carbon credits known as Verified Carbon Units (“VCUs”).

Parties intend that DGB will acquire one or more native forestland plots that are under immediate threat of deforestation, on which Quadriz will then develop, implement and manage REDD+ projects to generate and certify VCUs from forest conservation and restoration projects in the Chaco region in Paraguay.

The Gran Chaco is the second largest forest area of South America and currently ranks as one of the world’s deforestation hotspots due to the region’s rapidly expanding cattle ranching industry. The Gran Chaco functions as one of the world’s major carbon sinks and is home to an estimated 3,000+ plant species and 650+ bird- and mammal species. Further, there are an estimated 30+ species in the Gran Chaco on the International Union for the Conservation of Nature (IUCN) Red List.

Quadriz has a solid track record in designing forest carbon offset projects under the two leading carbon standards, known as the Verified Carbon Standard (VCS) and the Climate, Community and Biodiversity Standard (CCBS) with Gold Distinction. The Quadriz team has a wealth of experience and consists of skilled Carbon market traders and VCS-CCBS Forest Carbon Experts, as well as local Agro Engineers and other Forestry professionals.

Quadriz will be responsible for the certification of the VCUs in respect of land, project implementation on the ground including building a relationship with nonprofits or other organizations which educate and potentially employ others in the area to reduce deforestation and its pressures, implements biodiversity monitoring plans, and implements outreach to communities.

“We are excited to act as the local partner for DGB to source native forest land that is in immediate danger of deforestation and to preserve these areas applying high quality, nationally embedded REDD+ certification. DGB will have the opportunity to acquire forest land in direct competition with large cattle farm operations that would legally and immediately deforest 50% of the land. Our combined actions would enable us to preserve large native forest areas and are good economic alternatives to deforestation,” said Marcel van Heesewijk, CEO and Founder of Quadriz.

“We are proud to announce our ambition to undertake large carbon offset projects with a leading forest carbon developer. The proposed projects will protect endangered species from extinction and mitigate the release of carbon dioxide emissions over the project lifetime. The projects provide the opportunity to give back life to the world's forests and provide a visible, high impact on our natural surroundings, while creating real value for our shareholders.” said Selwyn Duijvestijn, CEO of DGB Group.