5 Penny Stocks To Buy On Robinhood Under $1.50 This Week

By: Penny Stocks to Buy, Picks, News and Information | PennyStocks.com - Feed
Are These Robinhood Penny Stocks On Your “Buy” or “Avoid” List This Week?

One question traders continue asking themselves is this: “Are penny stocks worth it?” It’s not an uncommon question to ask considering the current state of the stock market today. While there are big breakout wins, there’ve also been crushing losses for some. So, is the risk worth the reward? If this sounds like something you ponder daily, then there are a few things to keep in mind. First and most important is to take emotion out of trading entirely. One of the things that can lead to knee-jerk trading is excitement or, rather, fear of missing out. This “FOMO” has become synonymous with new traders in the market.

With the pandemic seemingly creating an army of new day traders overnight, education (or lack thereof) has played a big part in how the market moves. Think about what we saw earlier this year. The “Robinhood Army” as they’ve become known, flocked to names like Hertz, J.C. Penney, and others in hopes of making money with cheap stocks. What they forget amid the hype were the fundamentals. They were buying shares of bankrupt companies and many learned how ignoring the diligence phase of trading can put the breaks on excitement real quick.

Needless to say, with millions of new users of apps like Webull and Robinhood, penny stocks remain a focus. It’s also important to understand that there are ways of trading these cheap stock and remain consistently profitable. But, again, the first step is removing emotion. The next step is understanding how to weigh risk and reward. Lower-priced stocks tend to experience higher levels of volatility.

So, it’s good to know how to trade volatile stocks if this is a niche that interests you. Furthermore, it’s never a bad idea to identify market trends. If you’re looking for stocks in a “cold sector” or an industry that is experiencing heavier levels of selling pressure, it might be best to avoid it and opt for something that has positive sentiment, instead.

Think back (if you’ve traded long enough) to 2019 and the cannabis industry. Anyone looking to buy penny stocks in this arena was likely slapped in the face with much more selling than expected. Instead of fighting an uphill battle, many traders opted to focus on other, more bullish sectors. This is just one example, however. My point is that at the end of the day, a market trend can help determine a solid list of penny stocks to watch.

What’s more, is that if you use Robinhood to trade, you’ll need to find listed companies as opposed to OTC penny stocks. And while cheaper stocks are limited, there are still plenty of names to note. Here’s a quick list of names trading under $1.50 right now. But just because they’re cheap, are they the best penny stocks to buy, or should you avoid them entirely?

Penny Stocks To Buy On Robinhood Under $1.50Seneca Biopharma Inc.

Seneca Biopharma has been quite the stock to watch during the 4th quarter of 2020. That bullish trend continued into 2021. However, something else we’ve seen is that the last few weeks of trading have also come with higher levels of volume as well. Since early October, shares of SNCA stock climbed over 100% so far and December was one of the biggest single-months for the stock. This is where the majority of this triple digit move started to materialize.

So what’s been driving the SNCA stock momentum? While there haven’t been many new headlines since December, there are a few things to take note of right now. Aside from obtaining a 180-day extension to meet the NASDAQ minimum bid price, Seneca has been in the middle of a merger deal. Last month, the company announced that it would combine with Leading BioSciences and change its name to Palisade Bio, Inc. The new company plans to focus on Leading Bio’s main pipeline asset, LB1148 for gastrointestinal function treatment. Specifically, LB1148 has shown the potential to restore normal GI function after major surgery including reduction of post-op complications like abdominal adhesions.

Last week in a Form 425 filing, the company reported data from an open-label study. This data showed that patients treated with LB1148 had a “statistically significant shorter length of stay in the hospital than the expected length of stay based on their billing code at admission”. In light of this news, it wasn’t surprising to see the market’s reaction on Friday. Given this surge, will SNCA be one of the top penny stocks to watch at the start of the week? 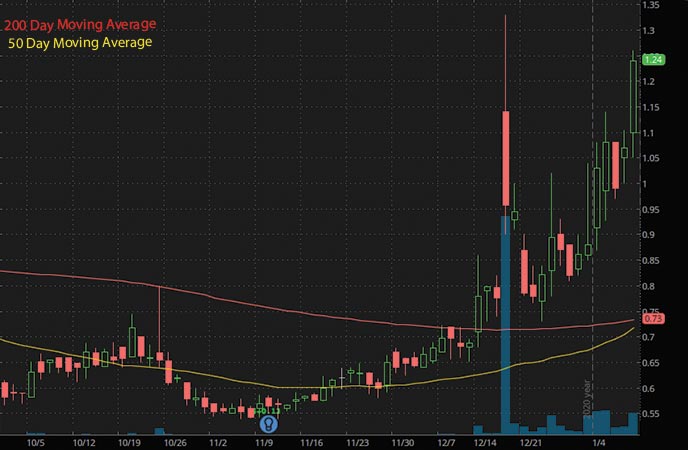 Another one of the biotech penny stocks on Robinhood we’ve followed is Celsion. You might recall that back in November and December CLSN was beginning to rebound after hitting 52-week lows of $0.4305. This move came as the company was examining data from a prior OPTIMA study for ThermoDox.

This is the company’s heat-activated treatment currently in Phase 3 development treating hepatocellular carcinoma (primary liver cancer). The company expected findings from independent analyses before the end of the year. But obviously, that is still up in the air as no further updates have been discussed as of this weekend.

Cancer stocks have definitely been something that traders have taken notice of. The company’s GEN-I treatment is immunotherapy being developed for treating ovarian cancer, for example. GEN-I is in a Phase II OVATION study. In light of the recent attention on this niche, and the momentum behind CLSN stock, it’s clear that interest has built up recently. Furthermore, Friday afternoon saw more action after the closing bell. That will also be something to keep in mind heading into Monday’s open. 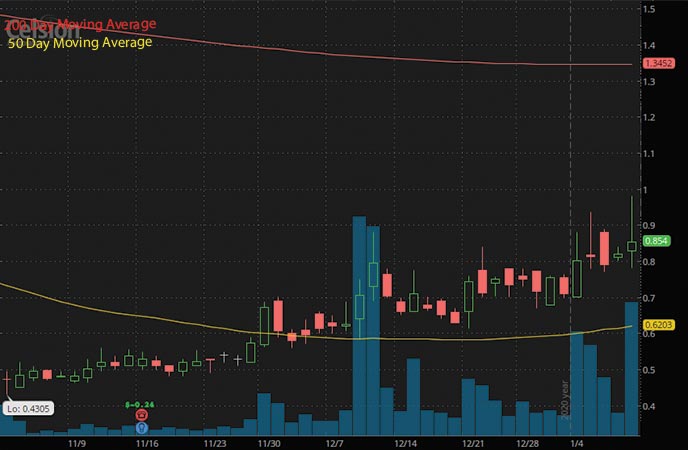 We included InspireMD in our list of penny stocks to watch in September. At the time, the company announced that its study of the CGuard Carotid Stent System, CARENET-III, was approved to proceed by the US FDA in helping prevent people from getting strokes. Fast-forward about a month and the company reported its third-quarter results. While not much has been released since then, we can extract some info from that quarterly update to use as a reference during early 2021 in my opinion.

First, the momentum from the last period could be a highlight to consider when the company reports its next quarterly results. For the three months ended September 20th, 2020, InspireMD generated total revenues of $980,000 as compared to $313,000 during the prior quarter. This represented a 213% increase sequentially versus the last quarter. Furthermore, CEO Marvin Slosman said on the Q3 earnings call that with InspireMD’s multi-generational product development plan underway for a variety of different areas, the hope is “to have those products to market in a timeframe that’s meaningful, within, 2021 potentially.”

Again, there haven’t been any new updates from the company or filings, for that matter. However, in light of those statements and the comments from the FDA on CARENET-III, NSPR could be one of the biotech penny stocks on Robinhood to watch right now. 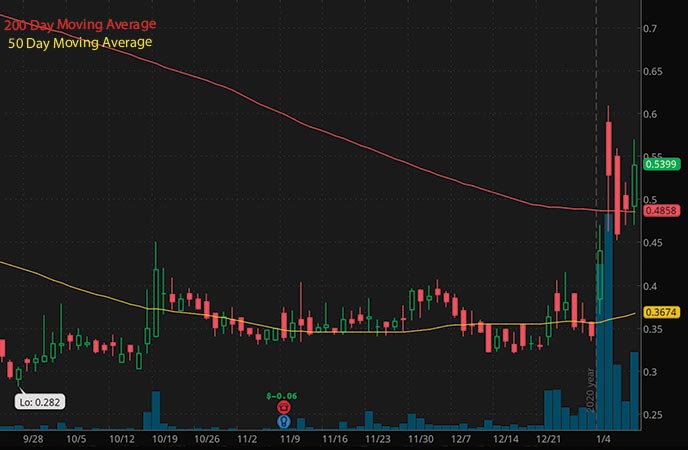 If you look at after-market trading on Friday, Aileron may come up on your list. The penny stock skyrocketed after the closing bell. The regular session finished off at $1.35 but the ALRN stock price continued moving long after that. This is another one of the trending cancer stocks in the market recently. In fact, most of the new year has seen volume levels much higher than anything ALRN saw during most of 2020.

This past week the company pushed forward with another round of financing. This time it was a near $35.9 million offering at $1.10 per share. The initial reaction saw the stock dip. But considering the closing was on or about January 8th, ALRN quickly recovered. It even traded higher at the end of the week last week. What also helped give it a boost was buying from its Director, Muneer Satter. This specifically was 9 million shares that was part of the offering done by the company and the event was translated positively by the market. Aileron intends to use the net proceeds from the offering to fund clinical development of ALRN-6924.

Late last year,  the company announced positive clinical data from its ongoing Phase 1b tria, which demonstrated clinical proof of concept of ALRN-6924. Prior to second-line topotecan administration, the application of ALRN6924 resulted in a protective effect against severe anemia, thrombocytopenia and neutropenia. 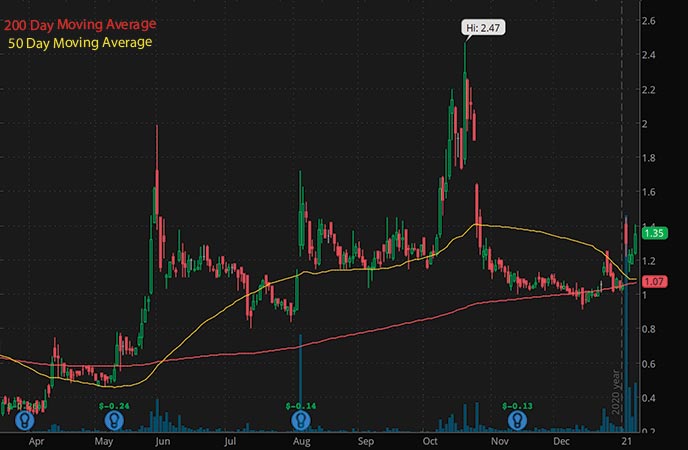 Another one of the high-volume penny stocks on Robinhood to watch this week could be Baudax Bio. The company’s stock saw a nice pop after hours on Friday that took it to highs of $1.23. The backstory on Baudax is that the penny stock was hit hard last year following news of a warrant exchange. That was ultimately translated into a potentially dilutive scenario by the look of the chart. However, the company said it did the deal to “improve its capital structure and remove financial overhang,” which Baudax said it believed negatively impacted its expected valuation and ability to attract additional capital investments.

Needless to say, Baudax stuck to its plan in light of a negatively impacted share price. The company has continued raising money to use for the commercialization of its ANJESO® along with pipeline development activities. ANJESO® was recently launched in the U.S. and is indicated for the management of moderate to severe pain, alone or in combination with other non-NSAID analgesics.

Looking at the week ahead, there could be something to pay attention to. Monday CEO Gerri Henwood presents a corporate overview at the H.C. Wainwright BioConnect Conference. Considering the recent surge in momentum and progress with ANJESO®, will BXRX be on your list of penny stocks to watch? 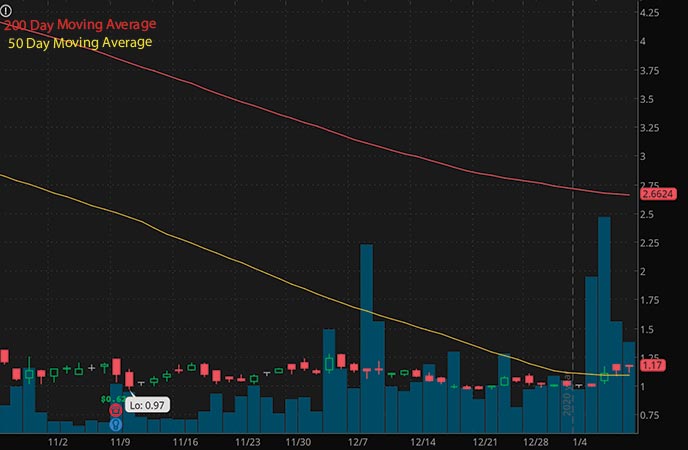