Launch startup Astra had a monumental week, achieving their first spaceflight with a rocket test on Tuesday. Astra CEO Chris Kemp joined Relativity CEO Tim Ellis, and VOX Space President Mandy Vaughn at our TC Sessions: Space event on Wednesday, and with Relativity’s huge $500 million round earlier this year, and Virgin Orbit’s milestone test flight in May, it was a big year for all involved.

A significant portion of our discussion focused on the very different approaches that each of these launch companies is taking to solving what boils down to the same problem – improving cost and availability of launch. Kemp first described Astra’s approach, which boils down to rigorous and continuous process and cost optimization.

“Where we focus our software effort is in understanding where to make engineering optimizations,” Kemp said. “So by having an Astra operating system that is making it visible to all of our engineers, where your costs are, because you have a long lead time on this part, because there’s a lot of labor to assemble this part. […] We’re not throwing any specific technology solution at a problem, we’re trying to basically triage the trade-offs that you’re making between the performance of the rocket – you can always use a higher-cost material, and you can potentially also use a higher cost manufacturing process, like 3D printing, but it isn’t always the right approach.”

Kemp added that Astra is essentially technology-agnostic when it comes to their production stack, and flexible in terms of how to configure that based on available resources and end goal parameters.

Ellis, meanwhile, talked about Relativity’s use of 3D printing, and how it differs significantly from its use in the production stack of other existing rocket manufacturers.

“What we’re doing at Relativity is completely different than then what almost everyone else is doing with using 3d printing for bits and pieces of a rocket,” he said.” From Apollo and launching rockets to the Moon, how we fundamentally build and develop, and the tool sets we use to make rockets and aerospace products is more or less the same as what it was 60 years ago – you walk into a factory, and it’s full of giant, expensive, fixed tooling, very complicated supply chains building products one at a time by hand with hundreds of thousands, to even millions of parts, depending on whether it’s a rocket or commercial aircraft.” 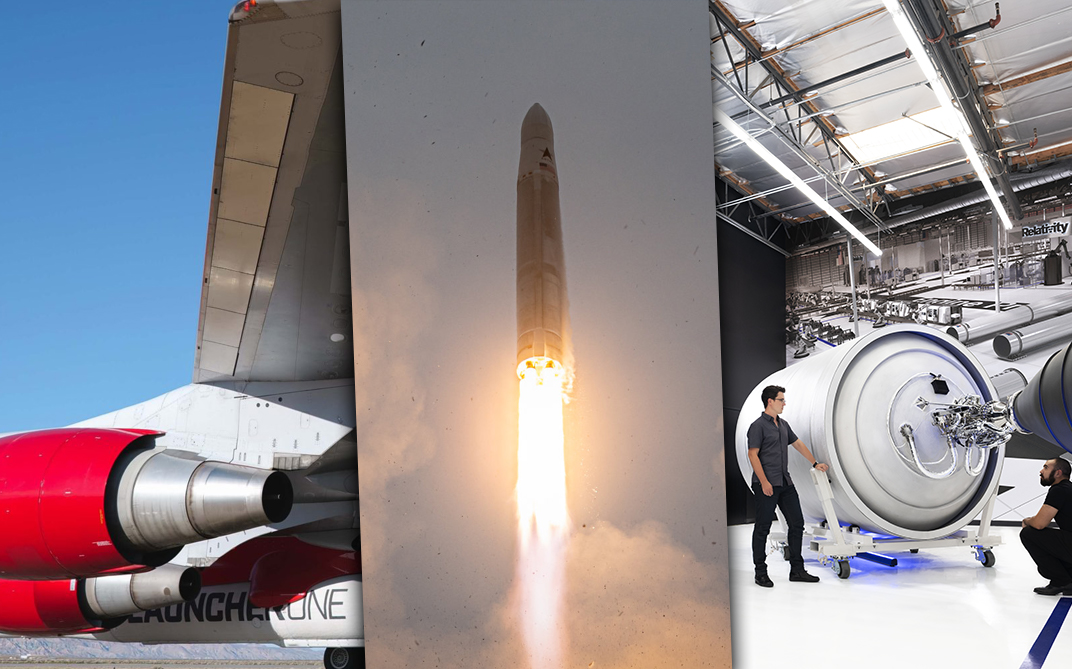 By contrast, Ellis pointed out that it’s creating rockets with less than 1,000 total components by viewing 3D printing from a top-down angle, and using it for the vast majority of the production process, rather than for select components.

“Then we’re able to actually build each rocket and from raw material and fly it in 60 days, once our factories operational, and then 60 days later, we’ll do a better version and 60 days later, a better version than that,” he said. “So the compounding rate of progress that’s possible with an all-in 3d printing approach, I believe, is equivalent to going from on-premise servers to cloud, or from gas internal combustion engines to electric – it’s really actually an entirely different tech stack and value chain, it’s not just the rocket itself.”

Vaughn pointed out that while all the companies have different approaches, they all seek to change the accessibility and cost of getting payloads to orbit. She then pointed out that Virgin Orbit has identified launch location flexibility as one of the key levers to speed that change in the right direction.

“It’s not just about getting mass to orbit. It’s about how do we change what is that cost point to do, and how do we change the accessibility to do so,” she said. “Also, really unique from our perspective is, what is that just kind of inherent mobility to do – so how can we actually just fly the launch pad around, and really change the CONOPS [concept of operations] of what it takes to establish an infrastructure and leverage that infrastructure to have access to space.”

Virgin Orbit’s LauncherOne is carried by a modified 747 passenger airplane, which takes off from and lands at a traditional runway. That not only means the rocket itself requires less fuel, and therefore less mass, to deliver its cargo to orbit, but also introduces a lot of launch site flexibility.

“By changing the discussion in terms of what is a launch, and what is the end game, it’s not just about mass to orbit, it’s about all of these other elements of how can we react quickly, how can we design and produce something quickly, as well as deploy that capability, maybe in a unique way from an unexpected location, and then get the on-space effects delivered uniquely and quickly,” Vaughn said.

All three panelists agreed that the market will likely support many providers when it comes to small launch vehicles, and their existing sold inventory queues reflects that. We also heard later in the day from Amazon SVP Dave Limp, who pointed out that they alone will require multiple launch providers contracted for multiple missions to get Amazon’s Project Kuiper constellation in place on orbit.