Are Shares of Boeing a Buy After the 737 MAX Recertification?

By: StockNews.com
Boeing (BA) celebrates the recent approval of its Boeing 737 MAX after almost two years. 737 MAX has been BA’s top-selling airplane and the company still has 3,365 orders in its backlog. Can BA make a powerful comeback despite the travel industry being crushed by the virus this year? Read more to find out.

The recent announcements of successful coronavirus vaccines have lifted a substantial overhang on the aviation sector, giving investors hope that the worst is behind us. In another piece of good news, the Federal Aviation Administration (FAA) announced on November 18th that the Boeing 737 MAX has been cleared for return to commercial service, after 20-long months of being grounded in the wake of the fatal Lion Air and Ethiopian Air accidents.

On Tuesday, the European Union Aviation Safety Agency (EASA) indicated that it is in agreement with the FAA, publishing a proposed air directive indicating its intent to approve the aircraft's return to European skies in the weeks to come. Meanwhile, the UAE civil aviation regulator said that a return schedule for the Jet will be announced “in a timely manner.”

In the third quarter that ended September 2020, BA reported a 29% drop in revenue to $14.14 billion. CA segment revenue fell 56% year-over-year to $3.6 billion on "lower delivery volume primarily due to Covid-19 impacts as well as 787 quality issues and associated rework." Revenue from the DSS segment came in at $6.8 billion, a 2% decline from the same period last year. Earnings fared even worse, as the company reported a loss of $0.79, compared to the year-ago EPS of $2.05.

The 737 MAX is BA’s best-selling plane. However, the company’s fundamentals have deteriorated in the last couple of years and uncertainty related to its comeback based on a number of factors have made our proprietary ratings system to rate the stock as “Neutral.”

Here is how our proprietary POWR Ratings system evaluates BA:

BA is currently trading higher than its 50-day and 200-day moving averages of $169.48 and $175.52, respectively, indicating that the stock is in an uptrend. In fact, the stock’s 30.6% return over the past month reflects solid short-term bullishness.

BA is facing collapsing demand for new planes. The company has seen 737 Max orders shrink by over 1,040 this year as nearly 600 have been removed from the backlog and nearly 450 have been canceled by carriers. Boeing deliveries sank 55% year-over-year to 28 planes in the last quarter as the 737 MAX remained on hold. The company has delivered only 12 737 commercial airplanes so far this year, compared to 118 in the same period last year.

BA recorded a total backlog of $393 billion in the last reported quarter, including more than 4,300 commercial airplanes. At the end of October, BA reported a backlog of 3,365 firm orders for the 737 MAX. While that's down from a peak of more than 4,700 firm orders two years ago, it's still a sizable backlog. 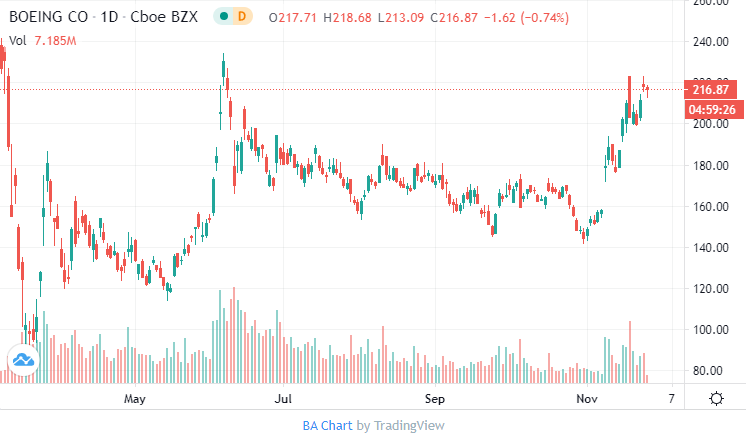 In terms of proximity to its 52-week high, which is a key factor that our Buy & Hold Grade takes into account, BA is not positioned well. The 737 MAX was BA’s best-selling plane, the one that has seen several crashes abroad and consequently was grounded worldwide. This news crushed BA stock from its high of near $435 in the first quarter of 2019. The stock is currently trading 41.7% below its 52-week high of $374.77.

While the 737 MAX was being tested and modified this year, the coronavirus pandemic severely depressed demand for air travel. Boeing’s internal projections indicate that it may take years before the global transport system reverts to trend, meaning 3-5% growth annually. BA is already sitting on massive liabilities and needs to unleash its earnings power to start servicing its debt. Additionally, the airline is still burning cash.

President and CEO David Calhoun said, “The COVID-19 pandemic is affecting every aspect of our business, including airline customer demand, production continuity, and supply chain stability.”

Moreover, the Chinese regulator’s sign-off is critical. The country was the first to ground the plane, and before the trade war, China was a vital market for BA. In 2015 and 2016, China sales accounted for 13% and 11% of the company's total revenue, respectively. In 2015, China was Boeing's largest export market, and it was the third largest in 2016.

BA is currently rated #36 out of 65 stocks in the Air/Defense Services industry. Other popular stocks in the group are Raytheon Technologies Corporation (RTX), Lockheed Martin Corporation (LMT) and AeroVironment, Inc. (AVAV). BA has lost 32.5% year-to-date. While AVAV has gained 4% so far this year, RTX and LMT have lost 13.4% and 1%, respectively, over this period.

The StockNews.com Air/Defense Services industry is ranked #34 out of the 123 industries. The companies in this industry specialize in many areas related to airlines, defense, and satellite services. Demand is driven by military budgets and the overall economic climate, which affects airline traffic and demand for new commercial aircraft. However, since the onset of the pandemic and the consequent stay-at-home orders, the industry has bottomed out due to limited government expenditure and low corporate travel spending.

The long-term bullish sentiment in BA is back, but without any material improvements in its earnings. Despite the regulatory approval, BA is rated “Neutral” due to its weakening fundamentals, development delays, and cost overruns, as determined by the four components of our POWR Ratings system.

Along with the recent news of the coronavirus vaccine, investors expect a sharp rebound in air travel. However, BA still has an uphill challenge ahead, with airlines scaling back growth plans due to the pandemic. The regulatory approval is significant; however, the company will still need to go through a series of recovery steps.

Major airlines have removed the 737 MAX from schedules until early next year as carriers will have to implement new training procedures for pilots, software updates, and wire separation modifications. Moreover, it will likely continue to falter until next year until a truly effective vaccine is available for the masses. BA’s internal projections show the demand for commercial airplanes will be declining 11% across the next decade.

Analyst sentiment, which gives a good sense of a stock’s future price movement, is moderate for BA. Out of 28 analysts that rated BA, fourteen advised holding the stock. Analysts expect its EPS to grow at a rate of 12.3% per annum over the next five years. BA needs to ramp up 737 MAX production and sales swiftly. It will take years for the aviation industry to return to its pre-COVID level and BA should slowly move higher as visibility on the reopening industry increases.

Investors: We Have Much to Be Thankful For! (Market outlook and trading strategy from Steve Reitmeister)

About the Author: Sidharath Gupta

Sidharath’s passion for the markets and his love of words guided him to becoming a financial journalist. He began his career as an Equity Analyst, researching stocks and preparing in-depth research reports. Sidharath is currently pursuing the CFA program to deepen his knowledge of financial anlaysis and investment strategies.

The post Are Shares of Boeing a Buy After the 737 MAX Recertification? appeared first on StockNews.com
Data & News supplied by www.cloudquote.io
Stock quotes supplied by Barchart
Quotes delayed at least 20 minutes.
By accessing this page, you agree to the following
Privacy Policy and Terms and Conditions.