A Strong Move in Shares of Fox Corp. is in the Charts

By: StockNews.com
A rectangle pattern has formed in the chart of Fox Corp. (FOX). A major move may be in the works. Learn when to enter a position to profit from this trade.

Shares of Fox Corp. (FOX) have been trending sideways and a rectangle pattern has formed in the chart.

FOX is an entertainment company that provides news and content under the FOX News Media, FOX Sports, FOX Entertainment and FOX Television Stations brands. The company has benefited from a strong adoption of Fox News and Fox Business Network and is expected to benefit from an increasing demand for live programming.

The firm generates a large portion of ad revenues from live programming, which helps protect its business from video-on-demand streaming. Revenue is also being aided by an increase in affiliate fees.

FOX has a solid balance sheet with $4.7 in cash on its balance sheet as of the last reported quarter. That was an increase of 43.6% year over year. The company has a current ratio of 3.9, meaning it has plenty of cash on hand to pay short-term debt. It also has a very low 0.8 debt to equity ratio.

The company’s growth has not been strong. Sales were up 6.8% over the past year, but earnings fell 32.4%. Sales are expected to be flat next year. From a valuation standpoint, the company has a low P/E of 16.5 and a Price to Book of 1.6, indicating that it is trading at a low multiple.

Momentum has not been on its side, as the stock is down over the short, mid and long term. This has led to poor grades in our POWR Ratings system.

Take a look at the 1-year chart of FOX below with added notations: 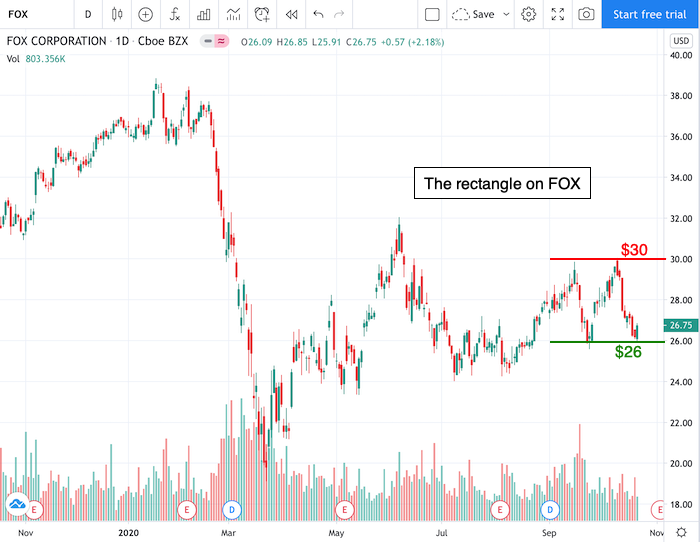 Chart of FOX provided by TradingView

Over the past couple of months, FOX has moved into a sideways trading range. While in the range, the stock has formed a resistance level at $30 (red), and a level of support at $26 (green).  At some point, the stock will have to either break the $30 resistance or the $26 support.

The possible trades in this stock are a buy on a breakout above $30 or a short on a breakdown below $26.

The process I use to select these “Chart of the Day” stocks is just the starting point for what I put in my private portfolio.

There I take a deeper dive into the stock market outlook. And determine which sectors are likely to outperform. Then and only then to do I pull the trigger on the most timely trades.

If you would like to be notified of my best trades, then just click on the link below to get started!

Have a good trading day!

About the Author: Christian Tharp, CMT

Christian is an expert stock market coach at the Adam Mesh Trading Group who has mentored more than 4,000 traders and investors. He is a professional technical analyst that is a certified Chartered Market Technician (CMT), which is a designation awarded by the CMT Association. Christian is also the author of the daily online newsletter Todays Big Stock.

The post A Strong Move in Shares of Fox Corp. is in the Charts appeared first on StockNews.com
Data & News supplied by www.cloudquote.io
Stock quotes supplied by Barchart
Quotes delayed at least 20 minutes.
By accessing this page, you agree to the following
Privacy Policy and Terms and Conditions.