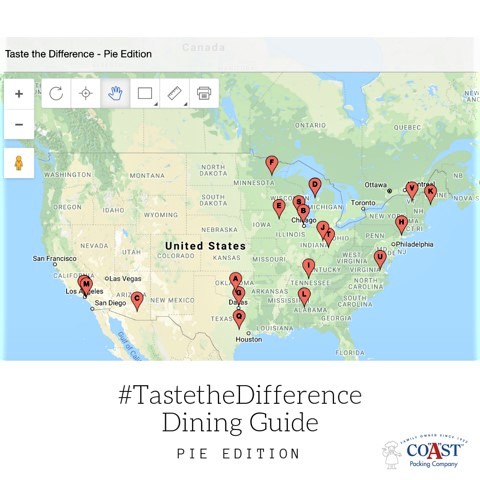 National Pi Day is upon us, and for those who see “pi” but think “pie” – as so many do — lard remains the go-to ingredient for pie crusts, especially at those establishments showcased on a special Coast Packing Company online gastronomic #FatMap prepared for the occasion.

As Wikipedia recounts, “Pi Day has been observed in many ways, including eating pie, throwing pies and discussing the significance of the number π, due to a pun based on the words ‘pi’ and ‘pie’ being homophones in English, and the coincidental circular nature of a pie.”

In this slice of #TastetheDifference, Coast Packing — the leading supplier of animal fat shortenings in the Western U.S. — is again putting its website (and #FatMap – http://bit.ly/2O0M33s) where its taste buds are.  Coast has FatMapped 22 pie shops around the country, spots where locals can taste for themselves just how lard and flaky pie crusts are meant for each other.  Among America’s shrines to baked goodness: Bang Bang Pie Shop, Chicago; Humble Pies, Dallas; Little Pie Company, New York City; Loveless Cafe, Nashville; Mrs. Wick’s Pies, Winchester, Indiana; and Porto’s, Burbank, Calif.

“In terms of freshness, flavor and texture, there really is no comparison to pie crusts prepared with lard, which is why we’re so delighted when consumers can taste for themselves,” said Eric R. Gustafson, Coast Packing CEO. “Toward that end, we at Coast are continuing our efforts to build #FatMaps showing that lard is both traditional and authentic.  On National Pi Day, pie lovers don’t need to go far to find places where they can sample flavor that just doesn’t quit.”

Have a favorite restaurant that puts lard or beef tallow on the menu (or just in some of its prize dishes)?  If so, drop Coast an email at info@coastpacking.com and the company will put it on the #FatMap.  Consumers can also post an image or link to via witter/Instagram/Pinterest, etc., with the hashtag #LardOnTheMenu or #TallowOnTheMenu.

Now marking its 97th year in business, Coast Packing Company (www.coastpacking.com), a closely held corporation, is the number one supplier of animal fat shortenings – particularly lard and beef tallow — in the Western United States. The company sells to major manufacturers, distributors, retailers, smaller food service operations and leading bakeries. The company participates actively in diverse ethnic markets – from Hispanic retail chains, with its VIVA brand, to various Asian specialty markets. Based in Vernon, Calif., Coast Packing Company is regional, national and, increasingly, global. In some cases, supplier relationships are multigenerational, extending back 50 years and more. Coast is a founding member of the Healthy Fats Coalition (http://www.healthyfatscoalition.org/).