By: Money Morning
While the Bitcoin market has had its ups and downs, what matters is that it is a major new technology that will disrupt the financial sector, and probably several others as well. And that means Bitcoin should follow the same dramatic patterns as other disruptive technologies - which, so far, it has. In fact, according to these charts, it's on the verge of a major move... The post Two Charts That Show the Bitcoin Market Is About to Take Off appeared first on Money Morning - Only the News You Can Profit From .

While the Bitcoin market has had its ups and downs, what matters is that it is a major new technology that will disrupt the financial sector, and probably several others as well.

And that means Bitcoin should follow the same dramatic patterns as other disruptive technologies - which, so far, it has.

One chart was developed by research firm Gartner, Inc., and is known as the Gartner Hype Cycle. It's intended as a tool to help investors and business executives assess where an emerging technology stands so they can determine when the time is right to jump in.

Let's take a look at where the Bitcoin market fits in with the Gartner chart.

CHART: We're at the Dawn of the Bitcoin Age

The technology trigger for Bitcoin was its invention in 2009, although the digital currency flew mostly under the radar of the mainstream media until last year.

We had a peak of inflated expectations last fall when the Bitcoin price spiked to over $1,100.

And Bitcoin also has suffered through the "trough of disillusionment." That's characterized by such events as negative press (for example, stories denouncing the Bitcoin market as a "bubble") and supplier consolidation and failures (like the bankruptcy of the Mt. Gox Bitcoin exchange).

But it's also characterized by an increase in venture capital funding, which is on pace to more than double in 2014 from last year.

So going by the Gartner chart, the Bitcoin market is either at the bottom of the trough or just coming out of it. A technology that reaches this stage is on the verge of a sustained period of rapid growth - the "slope of enlightenment."

Clearly, this is the ideal point to jump into a new technology - after the shake-out period when weak players fail, but well before it reaches the mass adoption stage.

And that brings us to the second chart, a bell curve that illustrates how quickly a new technology is adopted by the population - the "technology adoption rate."

Once the Bitcoin Market Moves Past the Early Adopters - Watch Out

Most new technologies are initially used by just a few tech-savvy pioneers, a circle that gradually extends to the so-called "early adopters." 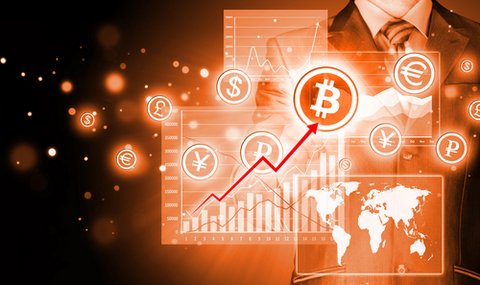 It helps to think of this phase - where the Bitcoin market currently finds itself - in terms of other technologies that now fall on the right side of the chart.

Many of Bitcoin's most fervent supporters, such as venture capitalist Marc Andreessen, like to compare the digital currency now to the Internet of the early 1990s. Andreessen would know - his Netscape web browser helped accelerate widespread adoption of the Internet in 1994.

At this point, 20 years later, the Internet has moved to the "laggards" phase, and along the way driving hundreds of billions in investments.

Or you can look at Facebook, Inc. (Nasdaq: FB). From its start as a social network for a few thousand Harvard University students in 2004, Facebook is now a global corporation with more than 1.2 billion active users and a market cap of $172 billion.

In only 10 years, Facebook moved from one side of the graph to the other.

It may be tempting to dismiss the Bitcoin market now because it's so small, but as the chart shows, only 15% or so of all potential Bitcoin users have adopted it.

The adoption rate of a technology is important - and especially so in the case of Bitcoin - because of something called the "network effect."

Simply put, the more people adopt a technology, the more useful it becomes. In other words, having e-mail back in the 1990s wasn't very useful when only a handful of people had it. But once a critical mass of people had it, e-mail became a virtual necessity.

Because part of Bitcoin's utility rests on the number of people using it, rapid growth in its adoption rate will feed on itself, drawing more and more people in. And that will generate tremendous demand within the growing Bitcoin market, driving the Bitcoin price to the crazy-high levels that some already have predicted.

Michael Terpin, the co-founder of BitAngels, an angel investor group for digital currency startups, in a Barron's column last week extrapolated a future price of $50,000 per bitcoin - 77 times the current Bitcoin price of $650.

"Even in these early days [Bitcoin] has the potential to disrupt large sectors of the financial, banking, e-commerce, and securities markets in ways that could create wealth across its various components in excess of $1 trillion," Terpin said. "Despite the (increasingly unlikely) prospect of it going to zero, the upside makes it an important portfolio driver in the high-risk portion of a balanced portfolio for those who are savvy enough to take on the learning curve."

UP NEXT: Right now U.S. investors can't buy a Bitcoin stock on a major U.S. exchange. But there's an ambitious Bitcoin mining company that has vowed to go public on a major exchange within the next year. This could well be the first Bitcoin IPO ever...

The post Two Charts That Show the Bitcoin Market Is About to Take Off appeared first on Money Morning - Only the News You Can Profit From.