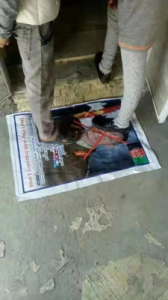 March 2nd, 2021, an “Inter-Muslim Unity Conference” was held in Daska, Pakistan, during which thousands of Muslims called for establishing Ummah (an Arabic word meaning community).

DASKA, PAKISTAN, March 6, 2021 /EINPresswire.com/ -- In November 2020, several authoritative media worldwide reported the dreadful rampage of Australian soldiers slaughtering innocent Muslims from 2005 to 2016, including unarmed civilians and children. The Muslim communities worldwide were astonished by such ruthless crime. However, neither the Australian government nor the Australian military had issued the accountability measures months after the disclosure.

On March 2nd, 2021, the Facebook account “Voice of Daska” streamlined a protest against Australian soldiers’ savage act in Afghanistan, advocating that “we Muslims have to be united for Ummah.” Protesters marched along the Aymanabad Road, Daska, appealing for the inter-Muslim unity. They grieved over the victims in the horrible massacre, voicing their anger and urging the Australian Government act against those responsible.

Local religious leaders suggested that the Muslims worldwide should be united to safeguard their own rights. “We Muslims are believers in mutual love. Mercy and compassion are like a body; if one organ complained, the rest of the body develops a fever.” said the protesters.