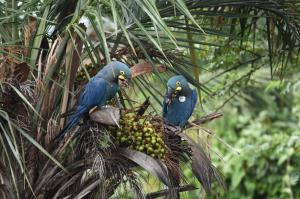 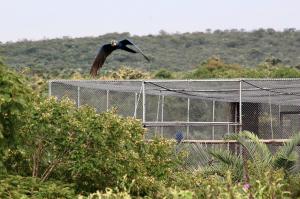 Photo 2: Flight of one of the Lear's Macaws. Photo: Plinio Mantowani 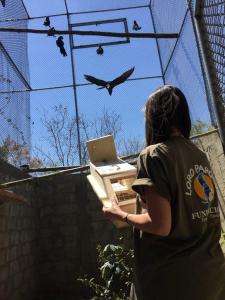 Photo 3: The adaptation of the birds goes through a large acclimatisation aviary in the area. Photo: Thiago Filadelfo

Thanks to the efforts of LPF and the coordination team in Brazil led by biologist Erica Pacífico, 17 Lear's macaws have been successfully returned and 8 reintroduced into their habitat in Brazil.”— Rafael Zamora, Scientific Director of Loro Parque FundaciónPUERTO DE LA CRUZ, SANTA CRUZ DE TENERIFE, SPAIN, March 5, 2021 /EINPresswire.com/ -- Thanks to the initiative of Loro Parque, Animal Embassy and Biodiversity Conservation Centre, in close collaboration with Loro Parque Fundación, two more Lear's Macaws (Anodorhynchus leari) were released into their natural habitat a few days ago. The project for these parrots is one of the most important projects of the Loro Parque Fundación, which has managed to lower the status of the Lear's macaw on the Red List of the International Union for Conservation of Nature (IUCN) from "critically endangered" to "endangered".

This is not the first time that the Foundation has reintroduced specimens of this species, which is one of the ten it saved from the threat of extinction, into their natural habitat. Already in August 2018, six Lear's macaws raised under the care of the Loro Parque Fundación were released into the wild and managed to adapt to the harsh conditions of their habitats in Brazil.

The conservation and gradual recovery of the Lear's macaw population has been a long and hard work, in which the ex-situ work carried out by the Loro Parque Fundación has played a key role. The Brazilian government gave two pairs of parrots to the Foundation 14 years ago, in 2006, in the hope that the Loro Parque Fundación would successfully breed the species and thus save it from extinction. Because the Lear's Macaw was in a similar situation to the Spix's Macaw, which is now extinct in the wild.

Only six months after the arrival of these two pairs, breeding began and since then more than 40 birds have been born in Tenerife. The aim of the foundation has always been to allow these parrots to return to their natural environment and to ensure their long-term conservation. Thus, in recent years, a total of 17 parrots have been returned to Brazil. Nine specimens to participate in the "National Action Plan for the Conservation of the Species" and eight Lear's macaws for a controlled return to the wild.

Loro Parque Fundación has developed special protocols for the breeding and keeping of this species. That is why our facilities have artificial rock surfaces that imitate the cliffs where the parrots breed in their original habitat. The different breeding techniques that the experts at Loro Parque Fundación have mastered and tested over many years have led to the great success in breeding.

The animals transferred to Brazil by Loro Parque Fundación have all the necessary qualifications to adapt to the conditions of their original home. However, the animals must slowly adapt to their new environment. Before being released into their native habitat, the parrots are prepared for life in the demanding region in large aviaries for several months. The macaws not only had to train their flight muscles, but also learn to recognise natural enemies and to feed independently in their natural habitat. To help the Lear's macaws recognise the dangers in their environment, a team of Brazilian biologists developed a special training programme. Snakes, birds of prey and even humans have to be recognised by them as a threat. Dummies that mimic the silhouettes of predators, as well as recordings of their characteristic sounds, are part of the adaptation process necessary for a successful release.

The reintroduction in 2019 was so successful that now a few days ago it has been possible to reintroduce two Lear's macaws bred in Tenerife to reinforce the population after the acclimatisation phase that started in August 2020. It was exciting to note that the animals to be released had already been visited by free-ranging macaws at the release aviary, as the impressive photos show.

Thanks to the great commitment of Loro Parque Fundación and the coordination team in Brazil, led by biologist Erica Pacífico, 17 Lear's macaws have been successfully returned and 8 of them already reintroduced into their natural habitat in Brazil. This commitment is certainly an exemplary implementation of the so-called "One Plan Approach" initiated by the conservation experts of the International Union for Conservation of Nature IUCN. In view of the sixth global wave of extinction that the Earth is currently experiencing, this plan foresees a combination of species conservation measures in natural habitats "in situ" combined with coordinated conservation breeding projects under human care "ex-situ". Here, of course, the know-how of modern zoos plays a special key role, as Loro Parque impressively demonstrates in this successful conservation project.