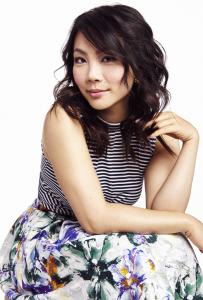 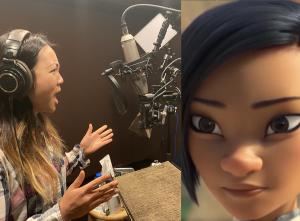 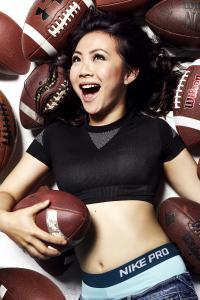 LOS ANGELES, CA, UNITED STATES, March 3, 2021 /EINPresswire.com/ -- Actress Jona Xiao lends a powerful voice as the Young Namaari antagonist character in Disney’s highly-anticipated animated film, RAYA AND THE LAST DRAGON, releasing in theaters and Disney+ on March 5, 2021. In addition, Xiao takes her upbeat edge to Starz for a recurring role in Season 2 of the Bruckheimer crime-drama, HIGHTOWN. Plus, she continues her athletic adventures on the field as an International Championship Quarterback in the growing sport of women’s flag football.

The newest chapter in the Disney Princess canon, RAYA AND THE LAST DRAGON tells the story of long ago, in the fantasy world of Kumandra, humans and dragons lived together in harmony. However, when sinister monsters known as the Druun threatened the land, the dragons sacrificed themselves to save humanity. Now, 500 years later, those same monsters have returned, and it's up to a lone warrior to track down the last dragon and stop the Druun for good.

Xiao has been working on RAYA for years, starting with the development stage, voicing early versions of Raya and other characters to help the writers solidify the story. Xiao adds, “Working with Adele Lim was an incredible joy. She was so encouraging and so sharp, throwing out line adjustments on the fly, and also has the biggest heart.”

Later this fall, Xiao heads to the popular Starz series, HIGHTOWN, recurring as Daisy opposite Luis Guzman throughout Season 2. A working-class woman at Xavier’s, Daisy is bubbly with an edge who delivers swag and proves she can handle herself in any situation.

Currently, Xiao is on location filming a notable role in another long-running fan favorite action series. Although further details are being kept under wraps, Xiao is thrilled at the chance to work in this kick-butt genre.

Xiao is used to taking on tough opponents both on-screen and off, taking her competitive spirit to the flag football field. She was a quarterback on the National U.S. Women's flag football prelim roster. In January 2020, Xiao represented the U.S. at International Bowl and she is on the WFFN USA Team and She-Unit, traveling around the world playing in various countries, including Germany, Brazil, Bahamas, and Panama. She also plays competitive dodgeball and gives back by raising money for charities by giving piggyback rides to anyone up to 330 pounds. Her athletic prowess started early finding success in high-school as an Academic All-American and All-State lacrosse player.

Audiences will recognize her as Lijuan in Fox Searchlight Pictures film Gifted, opposite Chris Evans, Jenny Slate, and Octavia Spencer. Her film credits also include the role of Gina in Columbia Pictures action-hero pic, Spider-Man: Homecoming; as well as portraying Stacy Chung in Twentieth Century Fox laugher, Keeping Up with the Joneses, opposite Gal Gadot, Zach Galifianakis, and Jon Hamm. On the small screen, Xiao has appeared in numerous top series, including recurring as Natalie Wu on BET’s hit Being Mary Jane; and as female coder Julie Yang on Team Mutiny on AMC's acclaimed Halt and Catch Fire. Her notable TV credits also include roles on Bones, Trophy Wife, and Rizzoli & Isles.

This feisty first generation Chinese-American actress grew up in St. Louis, Missouri where she began acting in middle school. Today, Xiao has built a solid reputation in the industry and with fans for her comedic abilities, while seamlessly tapping into her range in dramatic projects. Seeking to help others succeed, Xiao founded Career ACTivate, a company that has helped thousands of actors book more work and land great reps.