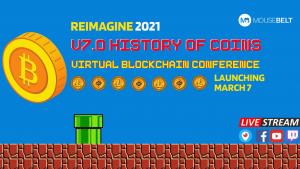 RI2021 is telling the larger story of cryptocurrency and asking guests their opinion on significant events in the industry and their outlook on the future.

The series features the larger story of cryptocurrency asking guests such as Bitpay, Celsius, Lolli, and more their take on significant events in the industry.

SAN FRANCISCO, CA, UNITED STATES, March 2, 2021 /EINPresswire.com/ -- MouseBelt Blockchain Accelerator--an ecosystem supporting students and startups in the blockchain industry, announced today they will be releasing version 7.0 of their virtual conference series REIMAGINE 2021, on March 7. The event will follow the theme: “History of Coins”. As Bitcoin reaches new all time highs, many newcomers are entering the space. This version of the series seeks to educate newbies and veterans alike on important moments in cryptocurrencies history. Interviews with top technologists, business executives, students and educators alike will focus on topics such as the cypherpunk movement, the birth of Bitcoin and Ethereum, major hacks and scandals, government and institutional buy-in and more.

The previous six events in the REIMAGINE series have featured over 300 interviews with 240 hours of content from speakers in 22 countries. Notable speakers include:

The newest series will feature all-new content produced with the support of the Blockchain Education Alliance partners--a network of industry leaders committed to supporting blockchain education and research and universities and beyond. New speakers include Sean Roland of Bitpay, and representatives from Zengo, Hedera Hashgraph, EOS Costa Rica and the Swiss National Bank. Returning speakers include Alex Maschinsky of Celsius.Network, Alex Adelman of Lolli, SKALE labs and more. Student blockchain organizations from MouseBelt University--an educational platform for students from 100+ schools in 24 countries, will also participate.

“Interest in Bitcoin, blockchain and crypto technology is at an all time high. Everyone from billionaires to your grandparents are asking questions about it. We’re here to answer them.” said Ashlie Meredith, Head of Education at MouseBelt and Co-Director of REIMAGINE.

The decision to launch a virtual conference series comes after MouseBelt’s years of experience offering remote acceleration, educational, and event services. Most recently, MouseBelt launched a free, virtual, Startup School to provide founders of very early stage projects with the knowledge and skills necessary to prepare for investment or placement in accelerator programs at MouseBelt and beyond. The virtual conference and networking event is designed to connect blockchain talent to infrastructure and industry. The goal is to welcome enthusiasts far and near to share their experiences and education. The team hopes these stories can serve as both entertainment and advice for the students and professionals alike tuning in.

About MouseBelt
MouseBelt is an ecosystem promoting blockchain innovation by supporting hands-on development of the emerging projects and leaders in the industry. The leaders they support are:

Startups - MouseBelt accelerator supports early-stage companies with capital and in-kind investments;
Builders - MouseBelt Engineering supports developers and projects with open-source tools and a development shop; and
Community - its media and university projects encourage newcomers to get involved with blockchain.