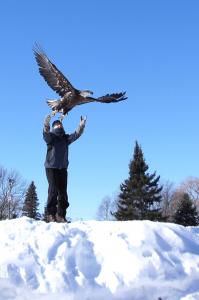 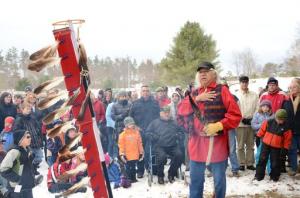 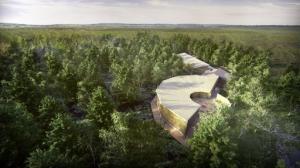 Rendering of the Migizi Aviary and Rehabilitation Center, which will be located north of Harbor Springs in the Northwest part of Michigan's lower peninsula

Migizi, eagles, are highly revered within Odawa culture and are central to many traditional teachings. We are honored to take a leading role in safeguarding and caring for these sacred birds.”— Doug Craven, LTBB Director of Natural ResourcesEMPIRE, MICHIGAN, USA, March 1, 2021 /EINPresswire.com/ -- Today, Doug Craven, Director of Natural Resources for the Little Traverse Bay Bands (LTBB) of Odawa Indians, and Rebecca Lessard, founder of Wings of Wonder (WOW) raptor rehabilitation center, announced the establishment of the Migizi Aviary and Rehabilitation Center.

Located on LTBB land in the northwestern part of Michigan’s lower peninsula, the center will be the first tribal eagle aviary center east of the Mississippi River, and one of only eight nationwide.

One of the country’s most celebrated raptor rehabilitators, Rebecca Lessard founded and operated WOW in Empire, Michigan, rehabilitating hundreds of eagles and other raptors over 30 years. During that time, Doug Craven and the tribe rescued and transported dozens of eagles and other injured birds of prey to WOW for treatment. Many of these raptors were able to return to tribal lands for release back into the wild.

In recent years, the idea of a tribal raptor center began to incubate as Doug and Rebecca discussed their shared passion for raptors, the importance of eagles to Native American worship and culture, and the need for awareness about the ongoing human impact on birds of prey. They imagined a public raptor center with a rehabilitation hospital and a lifetime home for several non-releasable eagles to educate the public about these majestic birds.

“Migizi, eagles, are highly revered within Odawa culture and are central to many traditional teachings. We take great pride in and are honored to take a leading role in safeguarding and caring for these sacred birds,” said Doug. “We are thrilled to have the opportunity to partner with Rebecca and Wings of Wonder, and to benefit from her matchless knowledge and experience.”

According to Rebecca, the opportunity to work with the LTBB was a blessing. “After 30 years of caring for eagles every day, it was my fondest hope to find a way to pass along my expertise to an organization that could carry this important work into the future,” said Rebecca. “Looking into the eyes of eagles, watching them take flight as they are released back into the wild, it is no wonder that Native Americans revere them. What a joy to be able to help the tribe establish a space of sanctuary and healing for these extraordinary creatures.”

With Doug’s leadership, the LTBB of Odawa Indians have committed to building a state-of-the-art raptor center, hiring tribally-owned Seven Generations (7GAE) of Kalamazoo, Michigan, as architects and engineers. The center will be named “Migizi,” which is a Native American word for eagle. The rehabilitation facility will be named, “The Wings of Wonder Rehabilitation Center,” in honor of Rebecca and her lifelong commitment to saving raptors.

The Migizi Center will cost approximately $600K, which will come from a combination of tribal commitments, grants, and individual contributions. Wings of Wonder, a 501(C)3 non-profit organization that has long supported the rehabilitation of eagles and other raptors, will be the fundraising arm of the project.

“We are asking our loyal contributors and all those who care about the fate of the Bald Eagle to help raise the funds to establish the Migizi center,” said Rebecca. “Every dollar we raise will go directly to work to build pristine enclosures, a clinic for caring for injured raptors, and an aviary that will enable visitors to witness these mighty birds in flight.” Donations can be made at www.wingsofwonder.org.

Once endangered, Bald Eagles are sacred animals in American Indian traditions, culture and religion. They represent honesty, truth, majesty, strength, courage, wisdom, power and freedom — and are believed to have a special connection with the Creator. Many years of federal protection and private rehabilitation have enabled eagles to avoid extinction though they are still at risk from pesticides, hunters, pollution and other environmental hazards.

Joe Mitchell, Little Traverse Bay Bands of Odawa Indians Tribal Elder and Pipe Carrier, said, “The Anishinaabek look to the Eagle as the messenger to the Creator. The Eagle carries our prayers to the Creator. The Eagle lets the Creator know that some of us are trying to live and walk in a Good Way. The Anishinaabek believe that when we see an eagle that we need to respectfully put some tobacco down on Mother Earth to show the Creator that we’re still living in a Good Way and also to thank the eagle for doing his responsibility and showing us that we need to remember our own responsibilities here. The Eagle can see far. Some say that the Eagle Clan people have the ability to see far also, even to the point of seeing people or things as they really are.”