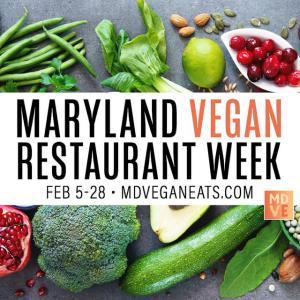 It allows restaurants to flex a muscle they aren't always utilizing and expand their demographic to an underserved community. And please don't let it be another freaking salad!”— Samantha Claassen & Naijha Wright-BrownBALTIMORE, MARYLAND, UNITED STATES, January 21, 2021 /EINPresswire.com/ -- Maryland Vegan Eats is expanding Maryland Vegan Restaurant Week for the month of February, from 2/5 - 2/28, as an opportunity for patrons all over Delmarva to visit new and past participating restaurants. As more people seek out and inquire about plant-based options on restaurant menus, customer demand continues to increase while at the same time motivating eateries that may not have otherwise been considered veg-friendly now looking for ways to introduce new plant-based offerings. As the public looks forward to Maryland Vegan Restaurant Week, the organizers, Samantha Claassen of Golden West Café and Naijha Wright-Brown of The Land of Kush, anticipate patrons getting excited to see the new vegan menu items

Nothing brings people together quite like good vegan and plant-based food. Again, Maryland Vegan Eats is looking to entice residents within the state and visitors from the surrounding state borders to patronize participating establishments through carry-out, curbside, delivery (if within the service area), or dine-in (if permitted). Unlike a traditional restaurant week that provides a prix fixe menu, participating restaurants are encouraged to create a selection of plant-based items to be offered throughout the vegan weeks – with the understanding that inclusivity also means affordability.

Samantha Claassen stated, “It allows restaurants to flex a muscle they aren't always utilizing and expand their demographic to an underserved community.”

Maryland Vegan Restaurant Week allows for restaurants to be more creative with their cuisines using plant-based and vegan ingredients while at the same time expanding their reach into new markets. Part of the success of Maryland Vegan Restaurant Week is the liberty that vegan, plant-based, and even veg-curious patrons have in choosing these options over meat-centric dishes because of increased availability at more restaurant locations.

Naijha Wright-Brown expressed, “And, please don’t let it be another freaking salad!”

During Maryland Vegan Restaurant Week, no longer do customers have to ask for a meal catered to their dietary restrictions which can leave some feeling embarrassed and awkward. Customers do not need to act shy or feel disappointed by salad or French fries being the only vegan options on the menu. Chefs are given the opportunity to show off their true culinary skills by creating plant-based food art with the hope that people will vote for their dish as the best. Restaurants wishing to sign up for this month-long challenge can go to www.mdveganeats.com for more information.

Maryland Vegan Eats is the brainchild of the Land of Kush and the Golden West Cafe. The mission of Vegan Restaurant Week is to bridge the gap by increasing the awareness, benefits, and accessibility of a plant-based diet through a fun, innovative, and community-based experience. Maryland Vegan Restaurant Week became an instant hit when more than 30 local Baltimore restaurants joined for the inaugural event in August of 2017.

At Maryland Vegan Restaurant Week, everyone is welcome at the table. Join in.

Visit www.mdveganeats.com for links to menus, locations, and more info.