By: Stockmarket.com
Could These Streaming Stocks Be Great Buys For Long Term Potential?

Streaming stocks have been one of the hottest sectors to watch in the stock market this year. Even if you have no intention of participating in the cord-cutting phenomenon, there is no question that there are countless opportunities available in both the video streaming and music streaming market. The monstrous rally we saw among the top streaming stocks was sparked by the insidious coronavirus forcing people staying inside and onto streaming platforms. Despite positive vaccine news this morning, the logistics of distributing vaccines to everyone can be time-consuming. As such, there could still be room for streaming stocks to go further.

Sure, the streaming wars have been widely discussed and debated for years. But they are never as popular now in 2020. The growing adoption of cloud-based solutions to increase the reach of video and music content is influencing the market growth positively. That’s because apart from TV boxes, consumers today have access to streaming through mobile apps, tablets, and even smart TVs. This trend is not unique to countries in North America and Europe but increasingly in Asia as well.

Streaming Stocks Could Benefit Amid The Cord Cutting Phenomenon

Most investors would be surprised to learn that one-quarter of all households with the internet subscribe to a streaming video service. It is also quite interesting to learn that nearly three-quarters of homes in the United States still fork out money for cable TV. It won’t take long for this figure to start moving down. And before they do, wouldn’t it make sense for investors to prepare for the streaming world by having a list of top streaming stocks to buy before these stocks become too big to ignore?

Netflix (NASDAQ:NFLX) is often the first to come to mind when you have a list of top streaming stocks to watch. And rightly so. The online streaming entertainment giant has seen its share price risen by 56% year-to-date. The company also boasts a market cap of $228 billion and is the largest entertainment/media company by market capitalization. You should note that Netflix had only become a household name in the last 10 years, so this is an impressive feat. This is a given seeing how Netflix has reported a 23.3% growth of its global streaming paid memberships. 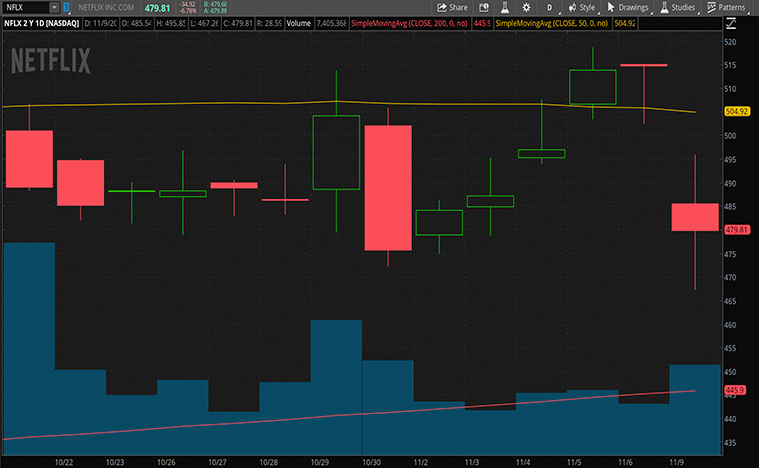 From its third-quarter reported earnings, the company recorded revenue growth of 22.7% year-over-year. Being a pioneer of online streaming services, the company has had a competitive edge over its peers. Netflix takes an active role as both producer and distributor for both its film and television series. By offering its “Netflix Originals” content, users have a wide array of dramas, series, and documentaries to choose from. With the pace of its subscriber’s growth, you could expect the company to capitalize from its large user base.

[Read More] Are These The Top Biotech Stocks To Watch This Week? 1 Could Be A Winner Of The Vaccine Race

Walt Disney (NYSE:DIS) is also one of the best streaming stocks to watch in the stock market today. That comes after the company restructured itself to prepare for the new normal, which makes it a compelling investment moving forward. This comes as it is focusing more on its streaming platform. Disney stands a real chance of making Disney+ an industry leader by leveraging its edge in original content. 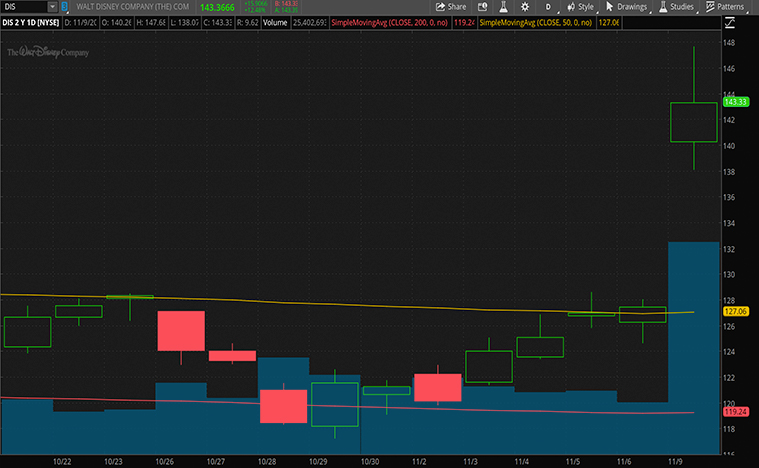 While most of its revenue came from its theme parks and resorts, the streaming service is increasingly worthy of attention. At last count in August, Disney+ has had up to 60.5 million subscribers. With the coronavirus pandemic continuing to rage on like a forest fire, you could assume Disney’s expanding streaming segment is having all the attention right now. The real question here is, can Disney+ be highly profitable in the long run? Will the company plan to re-invest revenue from other segments into its streaming platform? The company will be reporting its earnings November 12. While expectations are low, the near term operational headwinds could translate into an attractive buying opportunity moving forward.

Unlike the rest of the streaming stocks on this list, Spotify (NYSE:SPOT) is well known for audio rather than video. The audio streaming giant has shown explosive growth in 2020. Despite missing estimates in its third-quarter earnings, Spotify declared its fiscal Q3 a success, saying the business “performed at a high level,” with the strong monthly active user (MAU) and subscriber growth. 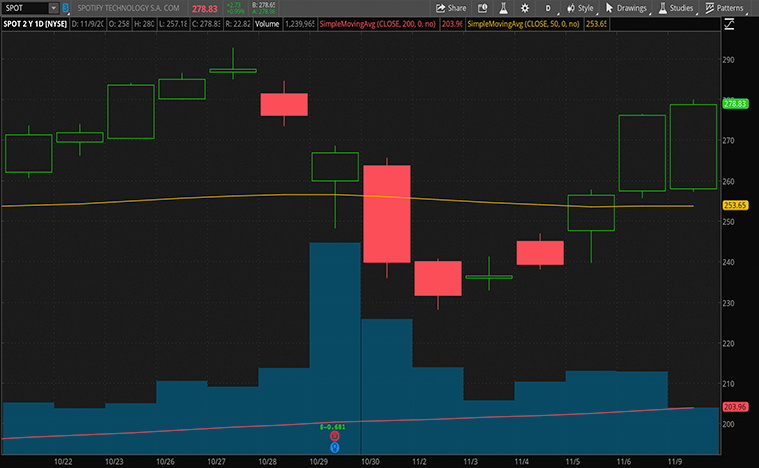 While the Apple’s service bundle might pose some threats to the audio streaming giant, it is Spotify’s music algorithm that sets it apart from other music streaming services. By analyzing the songs we listen to daily, the algorithm is able to identify what new recommendations we may like. This in turn introduces its users to more songs and hence increasing usage time. You can see how it propagates as users go deeper into the rabbit hole. By doing this, Spotify is able to retain its user base and increase its ad-supported MAU. With new exclusive podcast content, Spotify hopes to drive its premium subscriber growth and podcast advertisements. That said, would you include SPOT stock to your list of streaming stocks to buy now?

[Read More] Could These Tech Top Tech Stocks Benefit From A Biden Presidency?

The average household now likely has more than one subscription to a streaming service. And the answer to managing multiple services on a single interface is Roku (NASDAQ:ROKU). This makes it one of the best streaming stocks to buy in the stock market this year. Shares of Roku are up 92% year to date. This came after the company reported another smashing quarter, where its total revenue was up 73% year over year to $452 million. 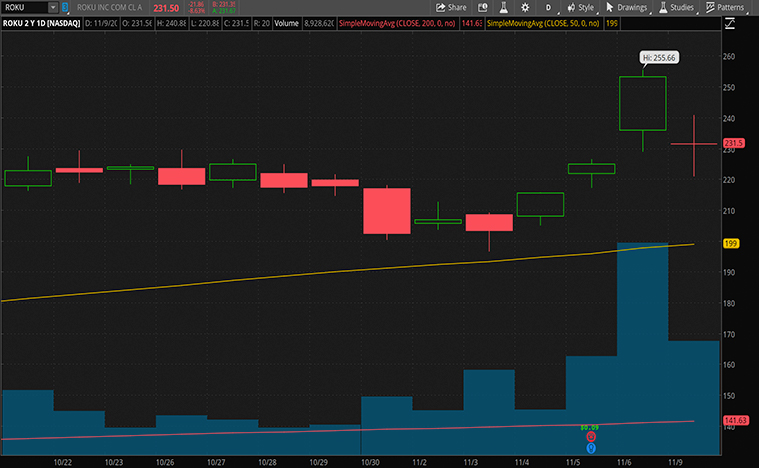 What’s more, Roku reported an operating income this quarter, instead of a loss. Like many other streaming stocks, Roku has been aggressively pursuing revenue growth. Roku’s platform segment is the more profitable segment within the company. This segment saw revenue increasing 78% from a year ago. Gross margin grew to 61% from 57% a quarter ago. The rise in both revenue and profitability contributed to Roku’s operating income of $12 million. That is clearly a departure from the $26.5 million loss last year. Could this operating profit be a sign of bigger things to come?

[Read More] Top Marijuana Stocks To Watch As The U.S. Elections Come To An End

Amazon (NASDAQ:AMZN) may not cross your mind as a streaming stock to watch. But it does have a presence in this space with its Prime Video service. Amazon’s Prime membership consolidates all of its services under one subscription. By making it a one-stop application for shipping, streaming, shopping, and reading, you can see what makes this entertainment stock so appealing. By offering its own streaming services, it can compete with the likes of Netflix and Disney+. Apart from video streaming, the company also offers Twitch, the largest video game streaming platform in the U.S. 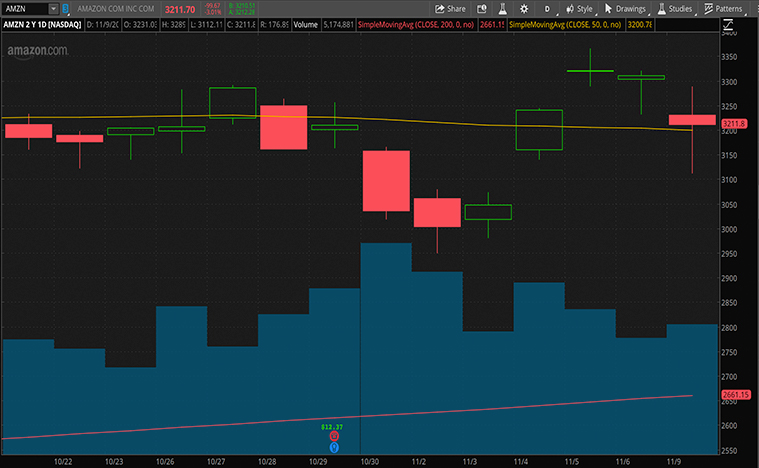 When you think about it, the company’s success has to do with two major megatrends, the e-commerce and cloud computing services. That’s enough reason to consider AMZN stock for your portfolio. As you may have already known, Amazon is looking to spend $7 billion on Amazon Prime content this year. While it may be a huge some for its rivals, the amount we are referring to is a rounding error in the company’s books. That said, would you consider adding AMZN stock on your list of streaming stocks to buy?